Bleed 2 is a 2D indie shoot em’ up with action that keeps players on their toes. Using superpowers like slowing time, flying, and bullet reflecting, the protagonist, Wryn, is charged with saving the world. The game has local co-op, and several playable characters each with different abilities. It boasts four difficulty modes, with seven levels and 25 bosses in all. Developer BootDisk Revolution‘s addicting game is a special gem in a sea of shoot em’ ups that succeeds at every level. 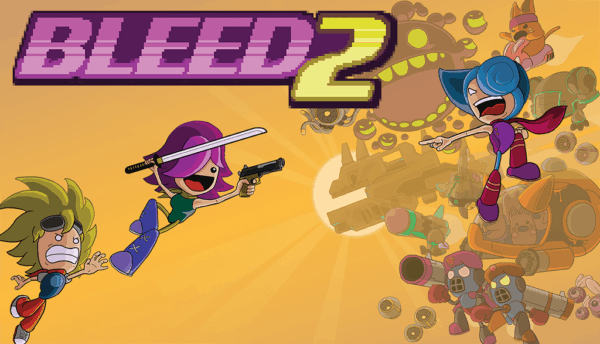 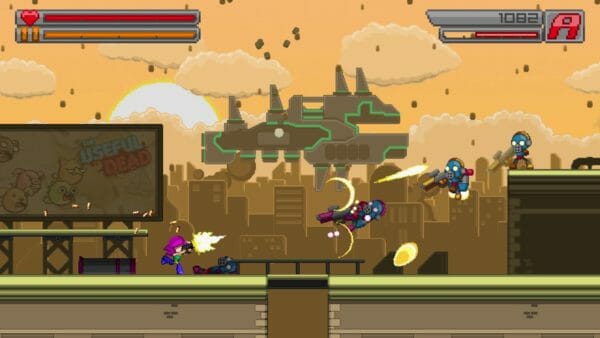 Bleed 2 starts out with a hero playing video games. Suddenly, an explosion happens and Wryn is called into action. After that, you spend the entire game taking down baddies and fighting bosses. Simply, straight-up classic action. Each level flows smoothly between boss fights and run and gun scenes. A continuous stream of enemies swarm you, as the difficulty increases as well. When that happens you must use your abilities to gain style points and finish with a big score. A leaderboard appears at the end of each level, showing the best score, both worldwide, and with your steam friends. 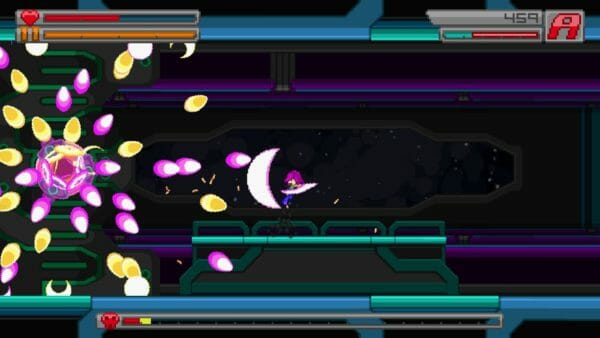 Being the sole hero of Earth, has its perks. Some of which include: air dodging, triple jumping, bullet reflecting, taunting, and slowing down time. Coming together, these abilities can create epic combos that look spectacular. The animations that go with these moves, are reused throughout the game. However, this is a good thing, as they add style to the proceedings. Most of the abilities are in the name. Although, taunting is a unique ability that is used rarely within the game. Taunting is special because it can be a stylish move to humiliate your opponent, or it can call on the crowd in certain levels and help you fight. 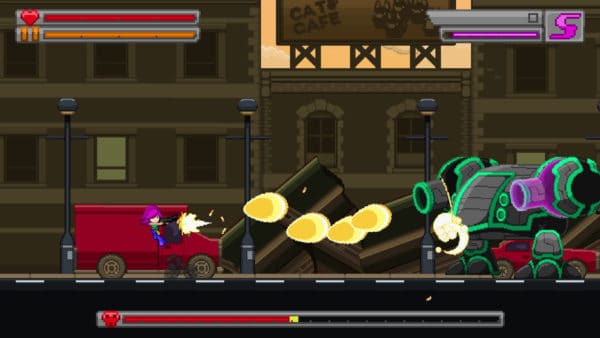 During the run and gun of normal play, the enemies are fairly basic. In fact, the environmental obstacles might be more trouble than these little enemies. The basic enemies shoot single laser bullets that come in two colors. Yellow, which can’t be deflected by Wryn. While the purple lasers can be deflected by the hero. The real fun and challenge in Bleed 2, comes from the 25 bosses. These mega enemies come in a variety of shapes and sizes. Each one has the basic health bar, and shoot to kill motions. However, they also have different attacks that are unique to each one. There are also two recurring villains in the game as well. Valentine, a super villain who also has some super powers. The other, is named The Rival, who serves as the final boss. 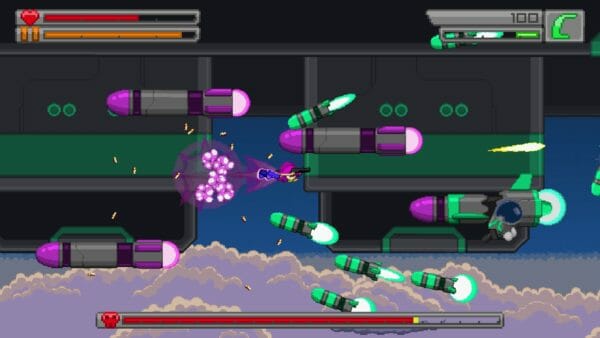 Bleed 2 isn’t a retro styled game. It uses a different kind of pixel to bring out it’s beautiful design. Making the gameplay standout even more. Each boss and character looks unique and radiates personality. Sadly, there’s no backstory to really anything that happens. Deciding to keep the player’s focus on the action instead. 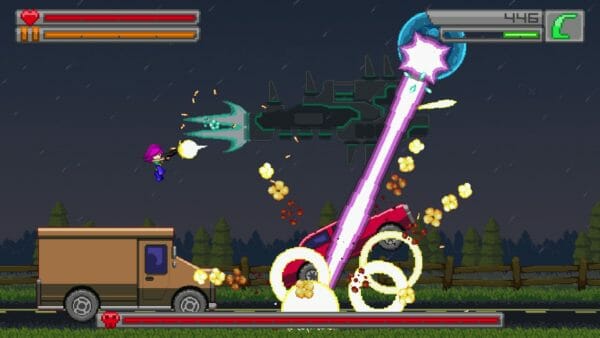 The game’s fast paced action and style can make it addicting. It’s quite honestly meant to be mastered. Besides Wryn, five other characters are unlockable and playable. For example, you can unlock The Rival and a robot. I’d rather not spoil the other three. Bleed 2 also has speedrun modes, which add a whole new level to the replay value. Both the story and speedrun modes have four difficulty levels. Not to mention, local co-op, which when played with a friend can keep you entertained for a long while.

Could use some backstory

Overall Thoughts: 9.0 Out of 10 This game is just absolute fun. There’s so much to keep you busy. It also lends itself well to being replayed on higher difficulties too. It genuinely feels like an upgraded version of most Shoot-em’ ups, with bosses that have fun mechanics and easy maneuverability skills. I do wish the characters had a bit more depth to them though. If Action shoot-em-ups are your thing, then Bleed 2 is perfect for you.

For the sake of transparency, the publisher (BootDisk Revolutions) did provide a digital code for review purposes.

About The Author: Aaron Fritz