Call of Duty has certainly had its fair share of ups and downs over the last few years.  Sledgehammer’s last game, three years ago, was Advanced Warfare, a game that is highly regarded among the best in the series.  Then we got Black Ops 3, which was generally considered “eh, ok”, and last year was Infinite Warfare, which no one but me seemed to really enjoy.  Well, with all the future games out of the way, Sledgehammer returns Call of Duty to the past, with a real throwback game. However, for me, it really fails to land or be memorable.

The Call of Duty franchise heads back to World War II, which is something some fans have been clamoring for, for a long time. I’m not really one of them, to be honest. While WW2 was a big event, playing a first-person shooter in that era isn’t exactly a fun time, for various reasons. 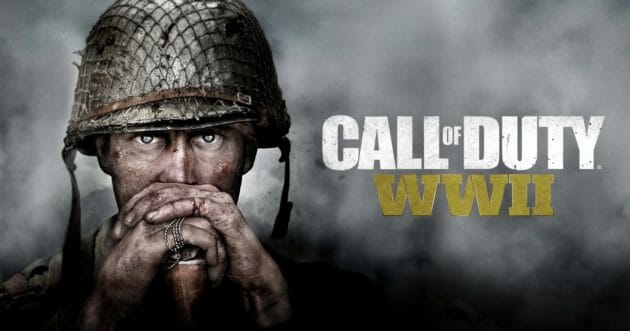 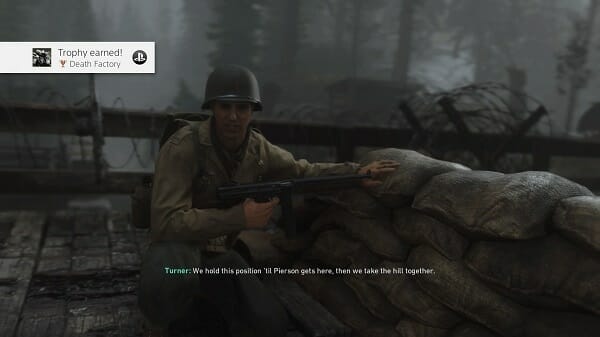 WW2 has you playing as Daniels, a Texas farm boy, who is involved in various set pieces alongside World War II.  The game opens with the Normandy Invasion, so they get their Saving Private Ryan moment out of the way early.  Along with Daniels is Zussman, Stiles, and Aiello who are your squad mates.  Your sergeant is a guy named Pierson with a tragedy in his past.  His commanding officer is Thompson, with Thompson and Pierson getting into frequent disagreements about what to do next.

The story is largely inoffensive, but that’s just because of how boring it is.  It feels like Sledgehammer had a checklist of beats to hit. Some examples are, the best friend (Zussman). The personal conflict between Pierson and Thompson. A spot (which is quickly gone by the next mission) of racism towards a black soldier from one of your own guys.  Although, there is one very cool mission about halfway through the game, for the most part, this might be the most routine CoD campaign in quite a while. 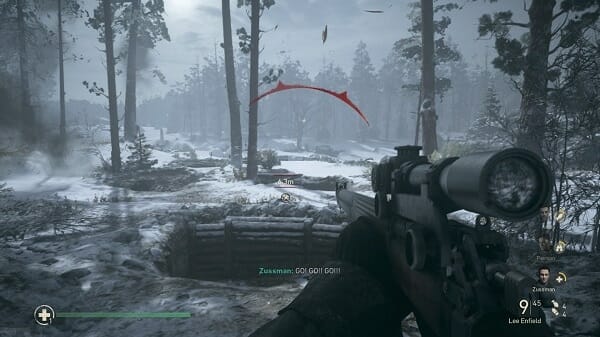 The nuts and bolts combat of WW2 is like every other CoD game on the planet.  Iron sights, trading weapons during a mission, a few scripted sequences, and so on.  There are really three big additions to WW2 worth pointing out:

WW2 also does have a very limited stealth system in certain missions. You move slow, crouch, hide in the dark, etc. If a soldier spots you, a skull starts flashing on screen warning you to hide. Although, you can always take care of him if you can. All told, it’s very rudimentary, and other games have done stealth far better. 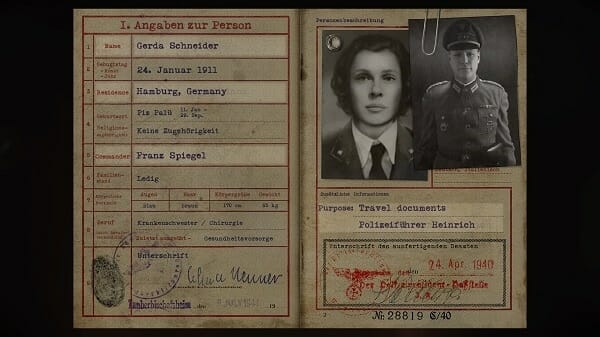 Arguably, the best mission in the game takes place about halfway on Mission 5 of the 11 mission campaign.  You don’t play as Daniels for the first half. Instead, you play as a female French resistance member named Rousseau.  You are charged with infiltrating a German base, under an assumed identity, and have to locate a member of the resistance. Then, switch briefcases with him, and detonate a bomb there to signal the US forces to strike.

At the start of the mission, you are given a dossier and info to aid in your cover.  You have no guns and have to remember your cover story to investigate people. Plus, find who your contact is.  For instance, if you say the code phrase to a soldier who you think is your contact but isn’t, he may inquire about who your commanding officer is, or what city you were born in.

It’s not the deepest level ever, but this single level does have a spark of creativity that is sorely missing from the rest of the game. Then, once you take control of Daniels again, it becomes a typical level.  Frankly, I would have rather played a six-hour campaign of Rousseau’s exploits. Instead of the Band of Brothers rip-off that Daniels and his crew have going. 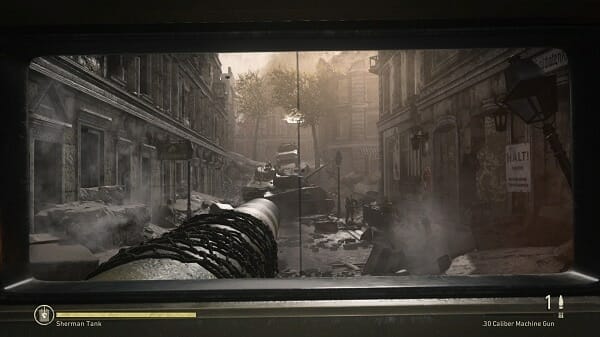 There’s really only two other problems when it comes to the campaign.  The first is, the starting weapons for most missions stink.  It’s a crappy rifle, and an even worse pistol.  I usually finish the levels with some type of submachine gun or sniper rifle because they are far more effective.  But the minute the next level loads, you default back to the garbage weapons.  They solved this problem in Black Ops 3, by letting you change your default campaign loadout. Infinite Warfare also had it as well. However, this game goes back on it, and it’s very detrimental to the experience. Also, if you can get a sniper rifle, you are unstoppable in singleplayer. They are horribly unbalanced and you can breeze through most missions if you have one.

The final problem is that the campaign is too overtly patriotic and in serious need of some international flavor. Aside from the mission mentioned above, the other 10 missions you play as Daniels. Thinking back to Call of Duty 2, where you had a Soviet, British and American campaign. Each having their own different objectives and motives.  This game just plays it entirely too safe for what was a highly diverse war. 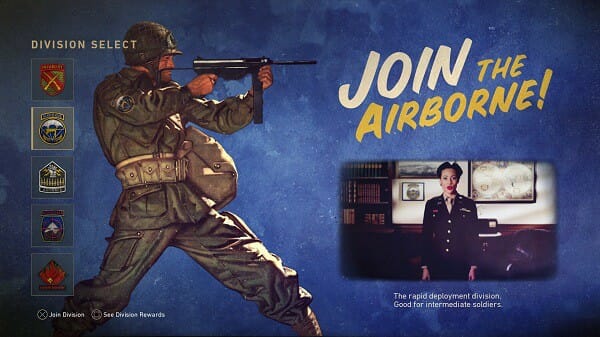 Honestly, the multiplayer in WW2 is a very mixed bag.  Shooting is fine enough, and some of the maps are great. However, some are also awful. Multiplayer has its perks, unlockable stuff, levels, and so on.  It’s rather a perfunctory experience, which feels like Sledgehammer is going through the motions.

That is when the motions actually work.  The big new innovation here is the HQ, where it’s supposed to be a social space for you to do something. Although I’m not quite sure what that is.  Since launch, Sledgehammer has turned off the social aspects of the HQ. So, when you spawn inside of it, it’s an empty space with NPCs. All this does is leave you with an objective of “Commend a fellow soldier” to be able to be completed, because there are no other soldiers in the HQ.

Although I don’t particularly want to be social with anyone who plays Call of Duty online, especially if voice chat was enabled. The problem is, HQ feels almost unnecessary in its current state. This is a problem when its biggest feature is useless.

Aside from that, you can take contracts in the HQ to perform daily, or weekly tasks. These vary from “kill 100 people in team deathmatch”, or “capture five points in domination mode.” These net you crates and unlock points.  You also join a class at the start of your multiplayer career as well. It’s not too deep, but can be alright, since it gives you some reward for leveling up. 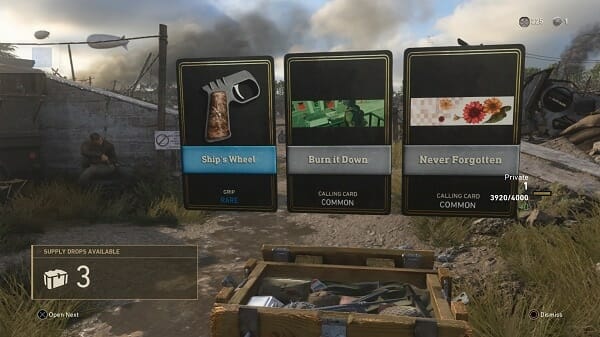 There are at least three currencies going on in this game for the multiplayer.  It’s not as bad as Star Wars: Battlefront 2, but it’ll get there soon, don’t worry.

There are first the armory points that you get from completing the contracts.  You can then spend these points to unlock new contracts, or different bits for your gun.  Note:  I didn’t say “upgrades” or “attachments” for your gun.  That’s a different system, tied to weapon levels.

The second currency is tokens.  You get one for leveling up, and there are two types, regular and prestige. These are for unlocking different classes, which then also helps in unlocking new weapons for your class too.  However, you still have to be at a certain level to use specific weapons, so it’s not as beneficial as one would assume.

Lootboxes are the last type of currency.  This unlocks new images for your tag, new parts for your gun, the occasional outfit for your soldier, and other cosmetic things.  You earn boxes from completing contracts, leveling up, or by chance at the end of a match.

With three different types of currency, the multiplayer feels kind of bloated.  WW2 does an incredibly poor job of actually explaining what most of the systems do, or even how to use them.  It’s not a disaster, but it is rather obtuse. And can get in the way of the game.  Honestly, I’m not even sure if what I just wrote here is actually correct or not. 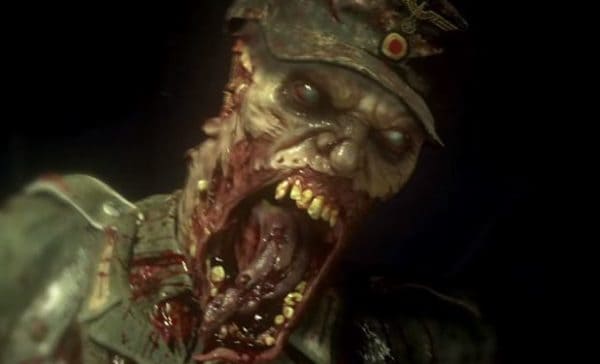 Well, the zombie’s mode has David Tennant and Elektra in it, that’s kind of about it?  Honestly, the Nazi Zombie mode is mostly the same as in past games. There is less of an emphasis on base defense, and more of a focus on doing barely explained objectives, but it’s the same thing as in every other zombie’s mode.

Zombies come in waves, and you shoot them (either alone, or with people). Zombies occasionally drop a power-up, or money, and after a while, the wave ends.  Then, you buy weapons with the money that dropped from the zombie or unlock new parts of the level. After that, the next wave starts.  Rinse and repeat.

Here’s a quick video of me doing a multiplayer match:

Overall Score: 5 out of 10 Call of Duty: Ghosts was a bad game, but at least it was attempting to be ambitious.  WW2 is a mediocre game that has almost nothing noteworthy going for it.  While it does bring Call of Duty back to World War II, it’s definitely not going to stay there for the next iteration.  CoD WW2 is a perfectly serviceable FPS. However, going against other games of its ilk, makes it almost feel like a relic.