The prototype for Celeste was made during a game jam in only four days.  Creators Noel Berry and Matt Thorson worked together to create 30 levels of a platformer that pushes the player to the limit in their quest to finish fast.  That version of the game was shown off at Summer Games Done Quick in 2016.  Then, Noel and Matt took that bare-bones concept and created a masterpiece of a game. Featuring precision jumps, colorful visuals, a fantastic soundtrack and a surprisingly thoughtful storyline. 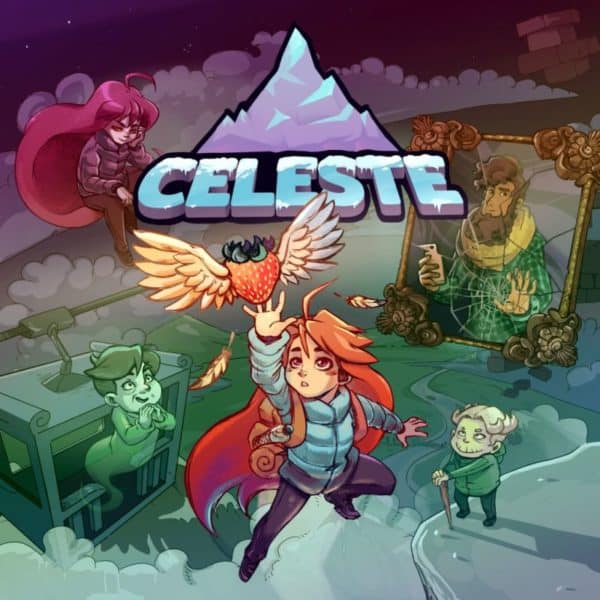 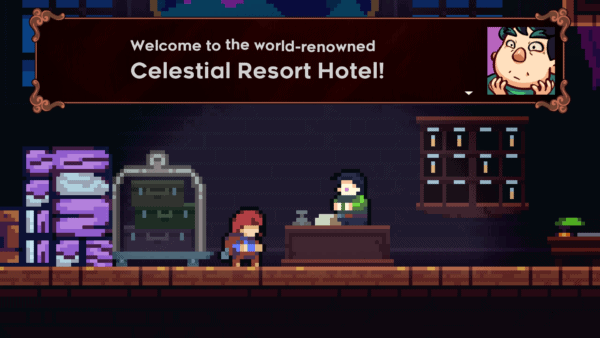 The story of Celeste starts off simply enough, a young woman named Madeline has arrived to climb the Celeste Mountain.  She is confronted by an old lady, Granny, who warns Madeline of the strange powers the mountain possesses.  Ignoring Granny’s warnings, Madeline sets off on her journey, meeting several interesting characters and enduring plenty of hardships along the way.  During her quest, Madeline runs into Theo, a photographer from the far-off land of Seattle. Theo acts as a sidekick of sorts and allows Madeline to get things off her chest during a few moments of calmness.

Madeline also meets Mr. Oshiro, a ghost of the owner of a hotel that last had inhabitants long ago. And a strange character calling herself “Part of Her” that she finds in a mirror. These two characters play a pivotal role in the psychology of Celeste.  As Celeste Mountain has a way to take ones inner demons and manifest them into reality.  Mr. Oshiro and the strange part of her, along with a strange phone call early on in the game, make Madeline face the depression and panic attacks she has tried to ignore and hideaway. 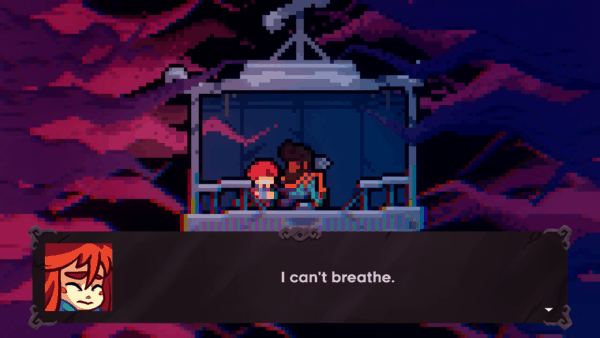 Celeste has such a powerful message. One that needs to be experienced to fully understand it. The characters speak in gibberish noises, but that charming garble adds to the uneasiness of the inner turmoil Madeline is facing. Her self-doubt and mental battles are ones that many people face on a regular basis. Seeing them take shape in a game based on difficult platforming really pushes home that message.  By the end of the game, you feel like you went on a full adventure with Madeline, both physically and mentally.  You feel happy, accomplished and even relieved that you were able to overcome all of the trials Celeste Mountain could throw at you. 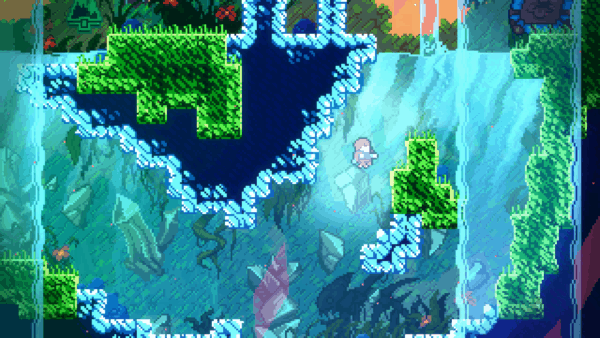 Even without the strong story and emotional bond you get from playing the game, the gameplay is just as fortuitous on its own merits. It’s sort of like Super Meat Boy meets Towerfall Ascension. You traverse platforming puzzles that have a very simple design but also take near-perfect jumps at times to solve.

The controls are simple, Madeline can jump and also use a mid-air dash one time.  Once she lands on a platform she can stand on, or she hits a green crystal, her dash replenishes.  The dash is represented by her hair color. Blue means the dash is available. While red means the dash is unavailable.  Madeline can also hang onto and climb walls for a short period of time. However, the longer she holds on to a wall, the bigger chance there is that she begins to sweat and lose grip. 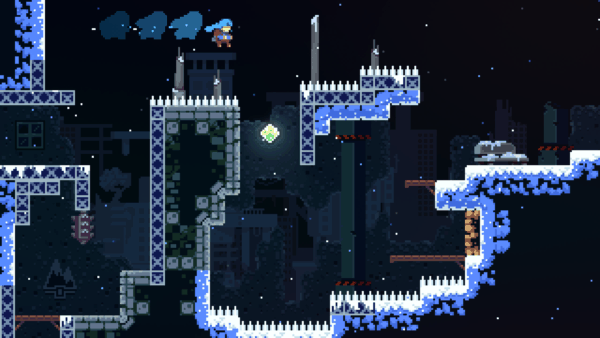 Another thing Matt Makes Games does so well is create power-ups and moving platforms, which produce new ways to use those simple abilities.  Each stage focuses on a different element, keeping things very fresh.  At times you have to jump on platforms to make them move. While at other intervals you have to dash through magic portals to reach the other side.  Each stage brings with it a unique twist on the platforming that challenges the player. Pushing you to figure out the best way to get across the level. 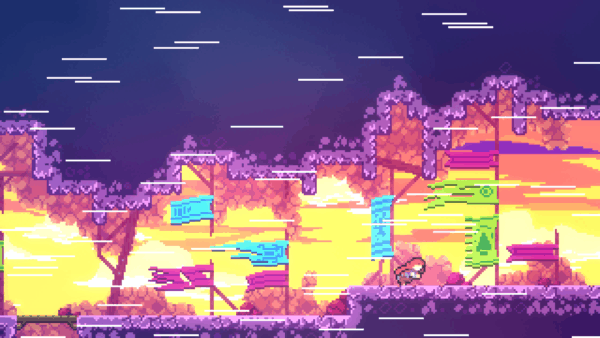 For players that want even more of a challenge, there are plenty of options for them.  In every stage, there are many Strawberries to collect.  What do the strawberries do?  Absolutely nothing. But players do get bragging rights for collecting them.  There are also Cassette tapes in every stage, which allow players to play the B-Side of each level. B-Sides consist of even harder versions of the previous levels, which introduce even more complex movements to use. B-Sides also include remixed versions of the music for those levels as well.  There are also even more difficult C-Sides for players who are looking to absolutely master the game.

Celeste is also ready-made for those that like going fast, as the game includes speed running tools.  A timer can be activated for those who want to see how fast they can finish a stage. There’s also a record book that shows the fastest times and least amount of deaths in any one stage. These books also keep a record of the total number of deaths Madeline has suffered in the entire game as well. But what if you aren’t wanting such a crazy challenge? And just want to experience the story of Celeste? 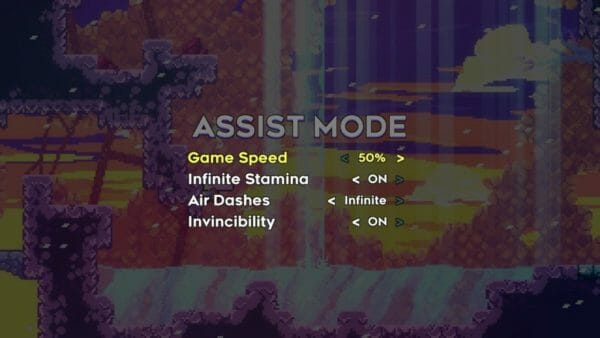 Matt Makes Games has you covered there as well with Assist Mode.  Assist Mode lets you easily complete levels to get enough of the experience and still witness Madeline’s inner struggles. Players are in no way belittled by the game for putting on the assist mode either. You are simply asked about what changes you’d like to make so that you can still go through the hardships with Madeline. It is really nice that the developers understand some players love a challenge. While others just simply want to feel the experience. 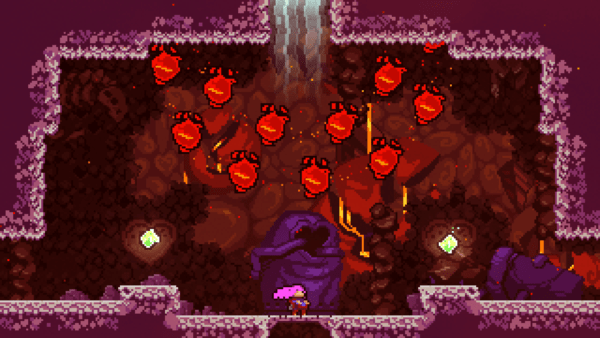 Graphically every stage is colorful and different.  The player jumps and climbs through icy mountains, a beat down hotel, an eerie cavern and much more.  Every level feels unique.  Fitting the mood of the story perfectly as Madeline attempts to not only conquer the mountain but her inner demons.  The music is also top-notch, as Lena Raine perfectly builds to a crescendo in every single stage. The B-Side tracks also do an outstanding job of taking the original tracks and making them feel different. While still retaining an aura of familiarity to them as well. Celeste has one of those soundtracks that are just nice to kick back and listen to in the background. It’s actually pretty good for getting writing work done as well.

+ One of the best platformers in existence

+ Music and Graphics create a great atmosphere and charm

(not really a con) – I just want more Celeste

Overall Score: 10 out of 10. Celeste is a challenging platformer, the likes I have not played since Super Meat Boy.  However, the big takeaway was how touching the story became.  How much it draws you in, and makes you feel for a pixelated figure with no face. Pushing you to conquer the mountain while doing your own self-evaluation. Madeline is such a charming character that many people can relate to.  Her journey might be your journey.  Her struggles could be yours.  In the end, Celeste is a surprising masterpiece of a game that is absolutely flawless in every way.

This game was reviewed with a digital retail copy purchased by W2Mnet.com