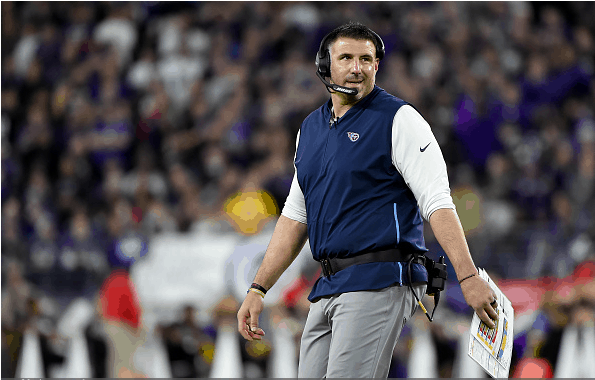 BALTIMORE, MARYLAND – JANUARY 11: Head coach Mike Vrabel of the Tennessee Titans looks on during the AFC Divisional Playoff game against the Baltimore Ravens at M&T Bank Stadium on January 11, 2020 in Baltimore, Maryland. (Photo by Will Newton/Getty Images)Tonight on The Kickoff, join host Harry Broadhurst, Erik Watkins, Jason Teasley, and Brandon Biskobing as they present their irreverent look at the worlds of pro and college football mixed in with the wit and ridiculousness you’ve come to expect.

This episode of the show is not for the faint of heart. No censoring whatsoever and it goes off the rails quick. We warned you on the last show that it would.

“Studs and Duds” opens and is followed by a STH discussion of the college coaching carousel, Odell Beckham Jr losing his mind, Chad Ochocinco wants to do what? and Luke Keuchly calls it a career at the age of 28.

The guys follow up with an honest discussion of the divisional round and who we would have picked as well as making our picks for the conference championship games this weekend.

All that and so much more (especially on the ridiculous) when you check out the episode seventeen of season three for The Kickoff, a presentation of the W2M Network (online at W2MNet.com).

Conference Championship Sunday: This Is NOT a Family Show

Ladies and gentlemen, welcome to The Kickoff with Harry Broadhurst, Erik Watkins, Jayson Teasley, and Brandon Biskobing. This is not your traditional football show. Rather than breaking down every single game, we give you all the must-know information and the debate. While encouraging each other to speak what we think. Whether we are right, wrong or just plain nuts.