Whenever a crossover game appears there’s always that extra little bit of intrigue in seeing how a developer will bring characters from various franchises together. Usually, this occurs in the form of fighting games such as the Marvel vs. Capcom series or Super Smash Bros. Ultimate. While others like Project X Zone bring characters from various Japanese publishers into a Strategy RPG. Arc System Works instead chose Code Shifter, a 2D platformer, to showcase its historic characters. And while its odes to said characters are done well, the game built around them is much less so. 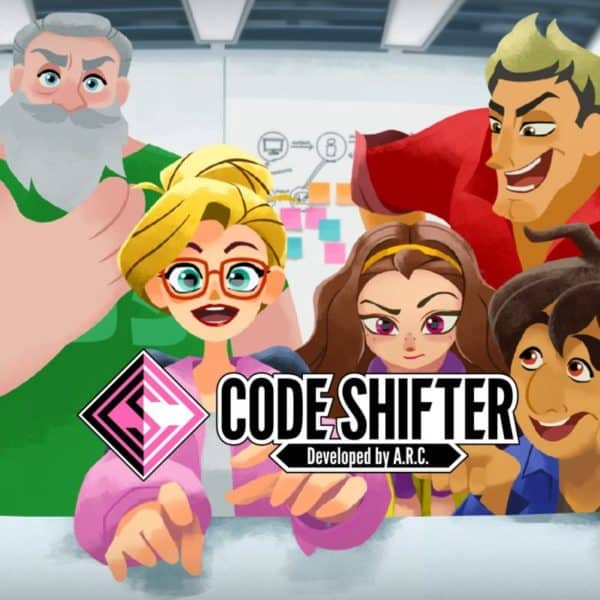 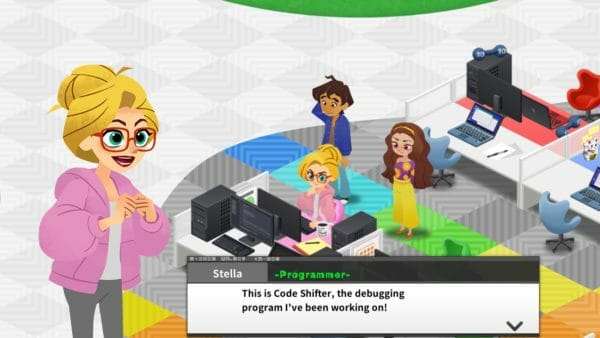 Code Shifter stars Stella a programmer who works at Awesome Rainbow Corp. ARC’s game Colorful Fighters is near completion and Stella suddenly finds an inordinate number of bugs in the game. So, she creates a code shiting program called Sera to fight the bugs on the inside. Unlike most platformers, this short setup would normally be all that’s required for you to go on your journey. This is not the case for Code Shifter.

Instead, the game is rather verbose. Featuring an overarching story that permeates throughout the game and other shorter stories that are tied to the folders for each of the co-workers. Where before and after each level, some dialogue occurs that either involves Colorful Fighters bug clearing progression or something much smaller like the artist Rudy working from home for the day because she’s not feeling well. Most of these stories are neat peeks behind the scenes of certain game development positions and issues such as crunch or overly long work hours. The thing is, much like the major story, none of it truly has a lot of substance.

Stella herself is someone you can easily get behind. She just wants to squash all these bugs and prove that Sera is an awesome program. The other characters are all sort of just there and feel like a mere plot device because each folder needed a character based around it. About halfway through the game, the antagonist changes from an annoying boss to a more traditional type villain and while this adds a bit more gravitas it doesn’t really offer a satisfying ending. Thus, making the story feel disappointing.

The Retro is in Full Effect 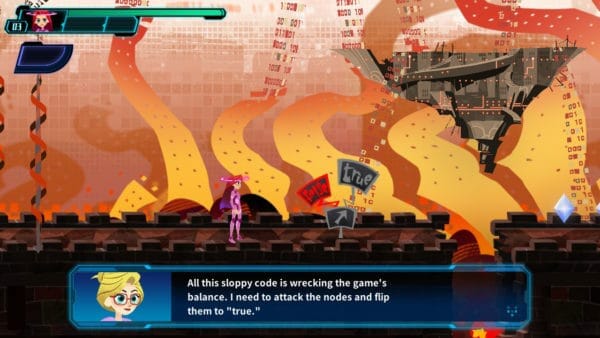 When in actual gameplay, Code Shifter is the usual 2D Platformer. Sera has different attacks depending on the movement of the left stick. For example, she can do an air attack by pressing up and a slide attack when the thumbstick is pressed downward. Sera also can double jump and has a special attack that reduces HP with each use.

While Sera is the central gameplay character, there’s an entire trove of Arc System Works characters available too. From Kunio and the Double Dragon brothers to Blazblue characters and the River City Girls. All present as interchangeable retro-designed helpers for Sera scattered throughout each level. Along with Sera, two of these characters can remain with you at all times unless you find another character and then replace them with the last ARC character you controlled. This is always the case unless you die at any point in a level. At that point, any stored characters are released. 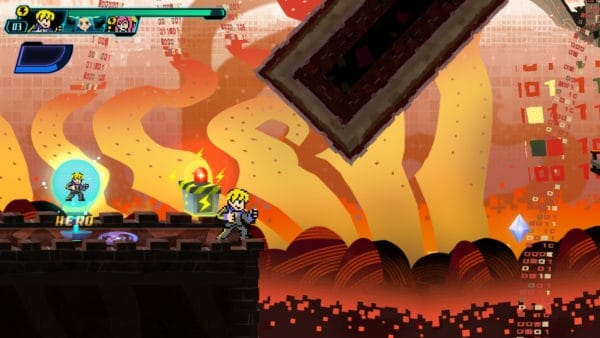 Each ARC character also comes equipped with their own set of basic attacks, specials, and chip-tune theme music. As a music lover, the tunes are a neat touch that made me want to keep switching characters. Speaking of that, each character also has a distinct extra purpose as well. Bruno, for instance, can break boxes and the River City Girls have elemental attributes. So, anyone that has fire attacks can melt ice or someone with electric attacks can make platforms move from one side to another. This certainly serves as a nice way to experience the vast catalog of characters. However, with such a diverse roster, many players will quickly find their favorites and the game drives you away from that in its design.

Hit Me Baby One More Time 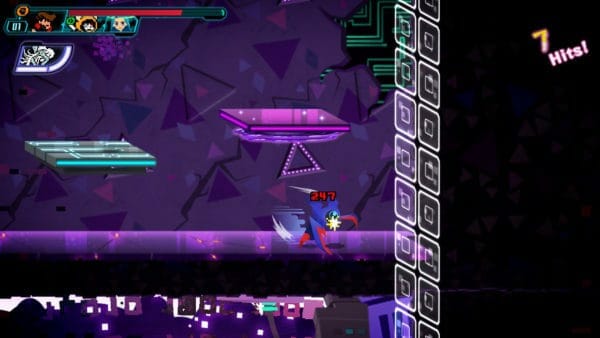 Each folder of levels has a theme built around it that also matches the type of bug the character is dealing with in the story. So the available ARC characters are also built around this as well. For example, Hudson deals with a freezing bug so most of the levels in his folder are ice themed and to counteract this, the ARC characters are mostly fire types. Certain characters may also appear depending on what challenges you’ll face as well. However, it just doesn’t gel well as an experience. It feels as if Code Shifter wants you to constantly be switching up characters, even if three or four you find in a particular level essentially do the same thing.

This is further negatively compounded by the awkward hit detection and jump timing that’s present. Several characters can double jump and there are times where it feels like not enough air gets put underneath the jumps and you won’t make it. There really aren’t too many spots where missing a jump means instant death, so that’s mostly forgivable.

However, the hit detection for enemies that otherwise wouldn’t even be a problem is not great. Unless you are some distance away from an enemy, a slash or sword attack is most likely going to wind up with you seeing red pain numbers. Elemental attacks don’t suffer nearly as much, but it is still an issue. Also, there are enemies later that have shields and trying to jump over them unscathed and also landing an attack is needlessly annoying. Not to mention, some enemies have attacks that are virtually unavoidable. 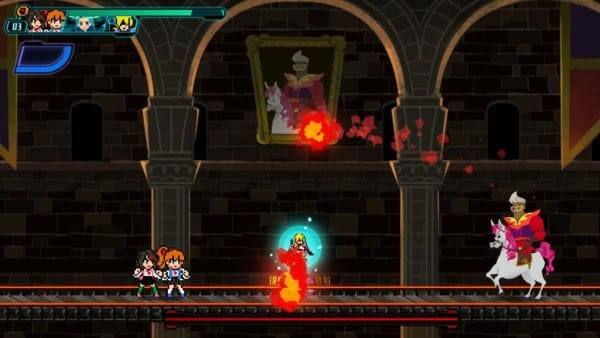 This is where all these issues sort of come to a head. The bad hit detection leads to you receiving damage and possibly losing a life where you shouldn’t. So any stored characters disappear and then you have to go on and find them again. So if you have a few favorite characters, chances are you’ll lose them. Personally, I’m not a score chaser, but for those that are, each level is scored at the end. Code Shifter actually rewards players with upgrades for getting S ranks. However, the chances of you accomplishing this are probably slim. In fact, I was intrigued by the upgrades for Sera and it motivated me to want to try and S rank levels, but constantly receiving damage or dying just made me stop caring. At least there is a two-player co-op available so you can play with a friend.

There are also some light puzzles that are elemental based or for instance, there’s a folder of levels based around teleporting. None of this is challenging because the game always provides the character solution right in front of you. In fact, you could argue that there wouldn’t be any challenge in Code Shifter‘s normal difficulty at all if it wasn’t for the hit detection issues. While the levels themselves have some nice variety, especially the last set that kind of takes everything from the first four folders and mash it together, these puzzles don’t. Perhaps giving players a bit more freedom in solving puzzles would make this feel special, but it sort of just feels arbitrary. 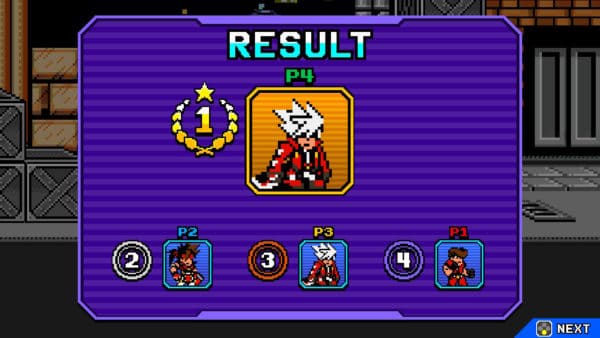 Code Shifter also lets you play Colorful Fighters as a separate game available in office mode. The game plays like a 4 vs. 4 retro Arena Fighter. You actually unlock fighters by playing the EX levels in each of the folders. Don’t expect the depth of Smash Bros. or anything, but it is a fun extra mode that lets you fully explore ARC character’s attacks in a different way.

Arc System Works has a tremendous batch of historic characters. They are brought to life well and with some glory in Code Shifter. However, what’s around those characters is rough. The story has some nice illusions to true game development happenings and Stella is a cool character. But the others didn’t move me at all. The issues in gameplay ruin any excitement you might have for trying to score highly in levels and the constant hand-holding with the puzzles and losing favorite characters to unnecessary deaths made me lethargic to want to continue. Overall, I am certainly sold on wanting to check out more Arc System characters in games, but I’d rather it be outside of Code Shifter