What would you do if suddenly something changed in the world and your job allowed you to have immortality? Would you question this change? Or continue to complete your task and keep on living at the expense of the deteriorating world around you. This is a central theme of Death’s Door, the latest title from the small team at Acid Nerve and published by Devolver Digital. From the major bosses to some of the smaller NPCs, the toll that causing, attempting to alter, or confronting death presents is massive. Thankfully all of the somberness is also jammed inside a game with enjoyable combat, a superb atmosphere, and some neat puzzles as well. 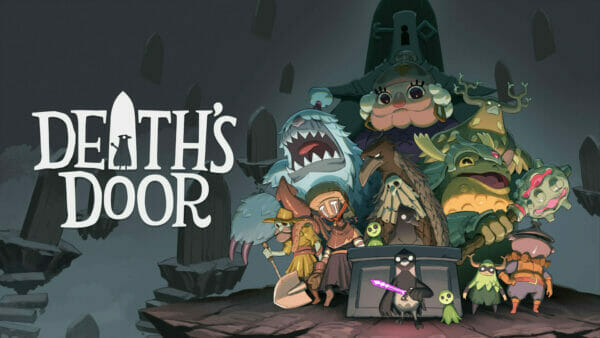 For some unknown reason, a heavy burden is placed on lowly crows who are tasked with reaping souls. Instead of receiving some type of physical reward for finishing said job, crows get to live in a state of immortality. However, if a crow doesn’t complete their sworn duty and loses a soul, they suffer the effects of aging. Sadly, this is the fate that befalls your particular crow. What perhaps was a fairly routine charge turns into a major headache, as a mission to dispatch a multi-legged creature goes wrong and it escapes through a mysterious door. This unfortunate occurrence sets your crow off into looking elsewhere for this precious soul. Essentially starting a chain reaction of events that leads to the discovery of the true reason behind the world of Death’s Door.

The aspect I came to love the most about Death’s Door is its wonderful sense of exploration. Instead of holding your hand with waypoints, it encourages you to be in the moment and experience what’s around you. Using only subtle wooden signs to vaguely point the way to certain major destinations is a brilliant touch. So too are the hints that you’ll need to make a ladder come down or unlock a gate in order to make further progress. And although Death’s Door has no map at all, I never found it overly difficult to find my way to the next major story beat.

This is helped a lot by the existence of the Hall of Doors which serves as a central hub that not only lets you upgrade your abilities, but makes it easy to go back and forth between important locations as well. Every main point has a door that is found rather early in each area, once opened, it unlocks that location in the Hall of Doors as a frame of reference. Not only that, but it serves as a spawning location if you happen to die.

Like any Zelda-like, what truly sets Death’s Door apart is combining that wonderful exploration element with treasure hunting and puzzle solving. Thankfully, you are given some help in the form of three key abilities a bomb, a bow and arrow, and a grappling hook. You’ll use these abilities to find hidden items such as ones that increase health or the vitality of those aforementioned abilities. Puzzle-solving is the major connective tissue for the game as a whole as it combines the use of the abilities together with actual progression in the game. For example, in the Witch’s wooded area you’ll be using the bow and arrow to make it catch fire, and then it will light up another firepit which unlocks a ladder. In this same area, you may use a bomb to open up another passageway that leads to soul currency. How all of this discoverability is intertwined is fantastic and truly creates a sense of reward for wandering around and searching every section before moving on to the next. There’s even quite a bit of post-game content to find including upgrades for each one of the aforementioned abilities and more. Unfortunately, my adoration for the exploration aspects isn’t quite matched at the same level as the combat component.

Combat focuses on two distinct styles, your feathered friend’s main weapon is a lighted sword, which easily slashes enemies into bloody messes. Eventually, though you do find other weapons such as a dagger or a big hammer doling out a bit more variety into the fights. The aforementioned bow and arrow can also be used in combat, along with a fire spell that as you would assume allows the hero to set those villains ablaze. I opted for a balanced approach by using both and it worked out well depending on the situation.

The aforementioned upgrade system does allow you to create a distinct build if you do happen to prefer one playstyle over the other. Although, by simply exploring, you’ll find enough soul currency hidden around, and in conjunction with the completion of the main story, you can pretty much just upgrade everything in a balanced way as well. So you don’t necessarily have to worry too much if you decide halfway through you’d rather battle against enemies in a different format.

The action itself is ultimately very satisfying. Figuring out an enemies’ attack patterns provides an advantage in knowing when to strike as well. I loved being able to have the flexibility to slash and smash one group of enemies and then in the next group I could just shoot them all down from afar like a badass bird archer. And while I could clearly see my improvement with the battle mechanics as I progressed through the game’s various encounters, I couldn’t help but feel like my upgrades weren’t doing much. Moving up a node on the damage upgrade I guess makes my crow’s strikes hurt more, but it feels exactly the same. This is also the case with the magic spell or the bow and arrow as well.

I should note that the team at Acid Nerve is a very small squad with each member taking on multiple roles to get the game to completion. So, perhaps it is a bit wrong to expect the combat system to change halfway through or adapt as your upgrades begin to mount. I never grew tired of the combat in Death’s Door personally, but it did start to feel samey after a while, although credit should be given for having each enemy match the aesthetic of each location.

Although I mentioned the moment-to-moment combat sometimes grows a bit stale, the boss battles make those moments worth it. Each boss not only has a memorable appearance such as the Witch or the Frog King, but each one also brings different combat elements into the fray. One boss may make you use the ranged part of your arsenal more, while another is almost an entire puzzle on its own, while yet another requires more melee combat mastery. When I think back on my time with Death’s Door the boss fights are absolutely a major factor in why I hold it in such high regard. Perhaps this comes from Acid Nerve’s work on their first hit game Titan Souls. Using what they learned from that game to bring that experience to another level with Death’s Door.

Yes, I’ll admit, I died a fair amount on each one, but once I figured out the patterns and found those exact strike times it was such an amazing feeling to best each one of the game’s big baddies. Sure, Death’s Door isn’t the first game to do this, and it may not be the absolute best game at accomplishing it either, but because the bosses are so well crafted as characters themselves it actually feels special to go through and defeat each one of them.

World Design, Writing, Characters and Music Are The Core of Death’s Door 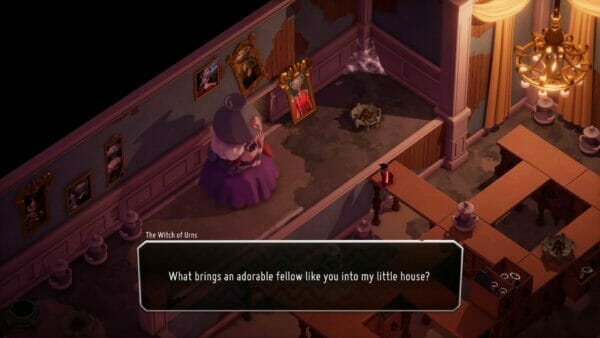 Something that aides Death’s Door is that its characters and world design are top-notch. I mentioned previously that from a combat perspective the bosses provide the spectacle and indelible moments. However, what makes this actually work is how the world design builds them up as you traverse its haunting open areas. Seeing the permanent damage of The Witch’s attempt to evade death on all of the manor’s inhabitants leaves you with this eerie feeling as you jaunt through each room and corridor. Likewise, the mysterious and desolate Swamp Lands do wonders to give you clues about its Amphibious ruler. Two NPC characters, in particular, play an immense role in accomplishing this as well. The solemn Gravekeeper and the lowly Pothead. The Gravekeeper is a guide of sorts imparting wisdom and also performing his job as an undertaker when required. Although resigned to live life as an embodiment of The Witch’s experiments, Pothead is a companion that unwittingly helps The Crow in keeping the grim realities of the world in perspective.

The writing for all of these characters is also very well done. Straddling the line between humorous and ominous rather well. The way the Witch glares at you and then strikes at The Crow with sharp witty dialogue is fantastic. At the same time, you may go back to the Hall of Doors and get wisecracks from several of your avian brethren. Death’s Door tells its story through both direct conversation and also through written text later in the adventure as you learn about the Lord of Doors and how each one had a different worldview from the next, until the current one who decides to go against fate.

I can’t end this review without mentioning the stellar musical score. Delivering plenty of catchy battle tunes, explorative melodies, and more somber tones for the dour consequences. Each area you go into from the Ceramic Manor which features melodies similar to the one in the main West World theme song, or my personal favorite which is a battle tune called Avarice that you’ll only hear at certain times in the game when you are in the process of unlocking one of the big abilities. Another favorite is later in the game called the The Old Watchtowers that carries with it a bit of jubilance but still remains mostly melodic in its essence. The piano is a major driver in almost all of these tracks and the work from David Fenn is tremendous. This soundtrack is one of the best of the year and I’ve spent plenty of time listening to it in and out of the game. It comes with the highest recommendation for you to seek it out.