I have a long and troubled relationship with the DiRT series. For me, DiRT 2 is one of the best racing games ever made, period.  It’s approachable, but also technical as well. It also had a good selection of events. Not to mention, it had a lot of personality to carry you through the game.  Since then, DiRT 3 came out which introduced some lackluster mechanics. DiRT Showdown released and not received well. Finally, there’s DiRT Rally, which appealed to the real serious fans of the series. So, now DiRT 4 has released and was supposed to be a new start for the franchise.  Unfortunately, it didn’t quite work out that way. 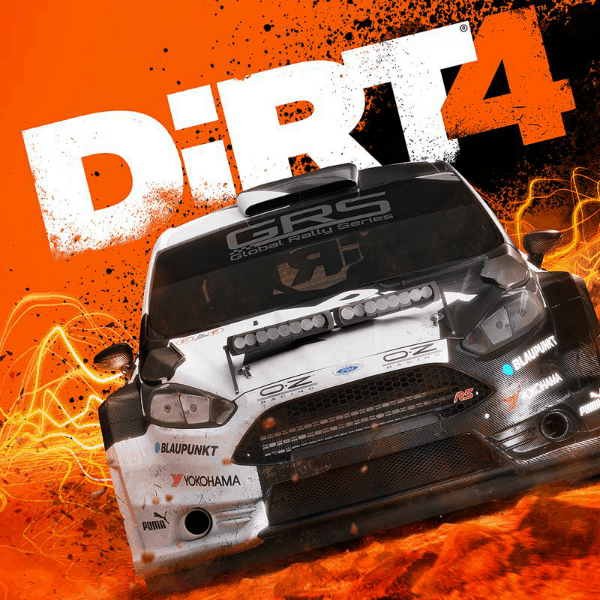 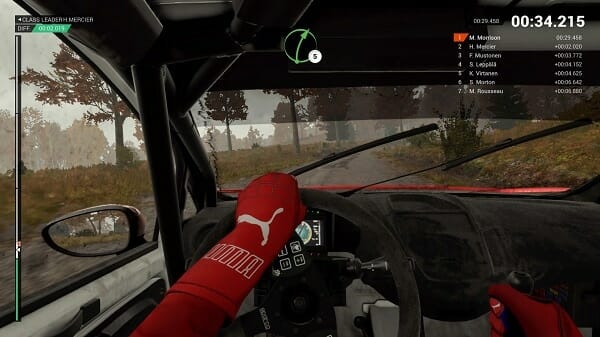 DiRT 4 puts you behind the wheel, as a new driver. The end goal is to win races, get prestige, build up yourself, and build for your new team as well.  Yes, not only do you create a new racer. But there’s also a team that you control, with the power to hire and fire people, as you see fit.

The start of DiRT 4 has you in the DiRT Academy, which lets you get used to the controls and playing the game. Teaching you when to accelerate, brake, turn, and even more advanced moves.  This all occurs via video tutorial, and then grants practice time to try it yourself. The system doesn’t use pass/fail, it’s more like a general guide than anything. However, it would be much better if the Academy actually showed you, as you played, what you did right or wrong as you did the tests.

There are two handling styles in DiRT 4, simulation and gamer.  Simulation is a lot more technical, and involves more thought about various things. The positioning of the car, weight distribution, knowing when to accelerate out of a turn, and so on.  Gamer is a tad more approachable. You don’t have to be as cognizant of the previously mentioned things, but it’s not an arcade mode either. 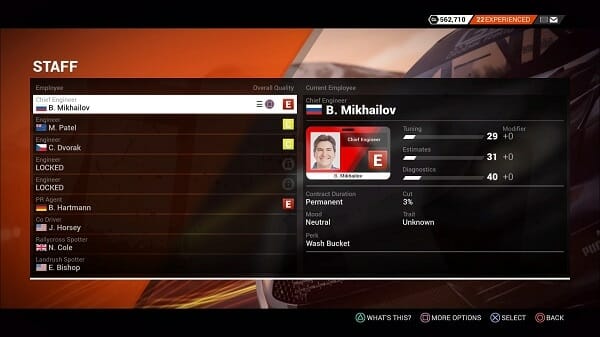 The team management system from DiRT Rally returns, in a slightly improved fashion.  You still hire chief engineers, PR agents, and spotters. Each one of them has stats and grades attached to them. Hiring more skilled employees, usually coincides with higher pay and a certain ranking for your racer as well.

Along with hiring or possibly firing these people, you can also buy them perks, which increases their performance.  For example, you can buy leadership training for the Chief Engineer. This increases morale for all engineers. Another example, is a wash bucket, which gets your car washed for free at pit areas. These perks serve as permanent upgrades for those specific employees. So, if you fire one of them, and hire someone else, you’ll need to buy perks for the replacements too. 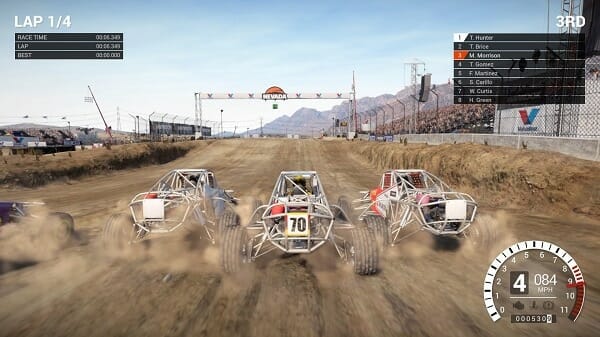 The nuts and bolts of racing in DiRT 4 are as solid as any previous Codemasters racing title. The cars are very responsive. And, if you know what you’re doing, the car can glide around turns. However, if you have some trouble grasping the controls, you’ll face some monumental crashes.  Races take place in areas such as: Australia, Michigan, and Wales, to name a few. Each track has different traction and other terrain focused things to consider.  For example, Sweden tends to have a lot of snow and ice (go figure), so picking a car with more traction is important. 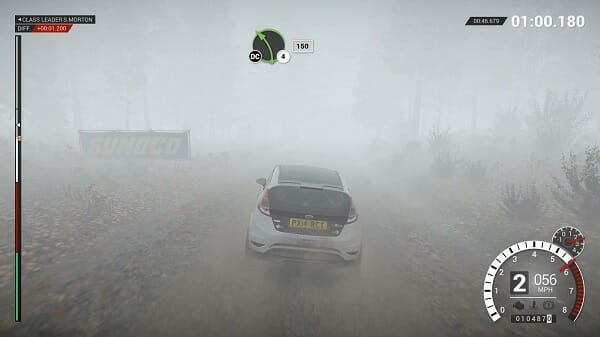 There are really only four race types in DiRT 4 which the previous games.  The race types include: Rally, Land Rush, Rally Cross and History Rally.

Rally: Rally races are all about you getting the best time on the track. So, essentially time trials by yourself. You do have a co-driver, who calls out turns before they happen.  She (or he) might say “right, turn 3 ahead”, and then, you know to make a medium turn right in a few seconds.  The co-driver uses the 1-6 turn system, 6 is a very slight turn, 1 is almost a 90 degree turn. Thus, keeping you apprised of what’s happening.  Rally events tend to have multiple stages, sometimes in completely different areas. This gives you a chance to repair the car between stages as well.

Landrush: Landrush events have you racing against other racers on a track.  Typically, these races are comprised of buggies or trucks and it’s just about you finishing first.  There are two races per area, with events usually having a few different areas.

Rallycross:  Rallycross is a lot like Landrush, only you have to use cars or karts, not trucks or buggies.  In this race, there’s also a joker lap.  A joker lap has a split in the track, on one side is a shorter turn, and the other side has a longer turn. This forces you to take the longer turn at least once during the race. If you don’t, you are hit with a time penalty. 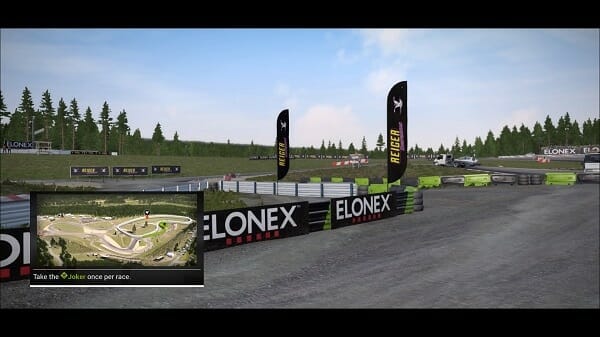 Historic Rally: Historic Rally is just the same as regular Rally, only you are using cars from the 70’s and 80’s instead. 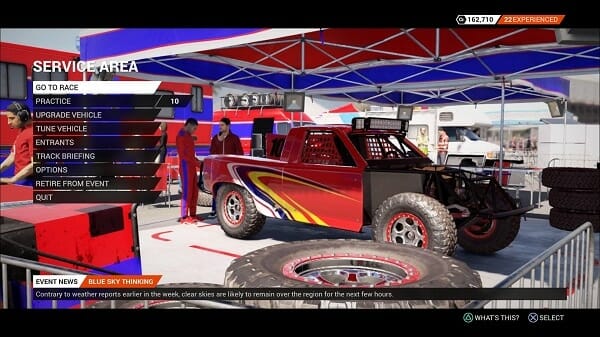 There are two problems with DiRT 4, one is small and the other is so large it almost ruins the experience.

My small issue with DiRT 4 is a real fundamental lack of any personality.  The menus are static and boring. There’s no flavor text at all between employees, and nothing to really convey any charm whatsoever.  I’m curious if they fired the UI designer from DiRT 2, a game that was brimming with personality, and replaced them with a robot.

The rather large issue, is damn-near game ruining. This is the removal of the Flashback/Rewind system.  In prior DiRT games, particularly 2 and 3, if you took a really bad turn, or a jump went awry, you could use a Flashback to rewind the game by about five seconds. This would allow you to hopefully correct your mistake.  They jettisoned the system for DiRT Rally, which is fine, since that was supposed to be a simulation game.

So, instead of making two game franchises, similar to how Microsoft has Forza Motorsport and Forza Horizon, they opted to just keep the Flashback system out of the numbered games too. This means you pretty much have to race well, and not make any mistakes.

So, what did Codemasters replace Flashbacks with?  Practice laps and restarts.  Yes, before a race, you can run practice laps on the track, up to ten different times. What?  It feels like a complete slap in the face to players to not only have this option, but to even have a limit on it. You also have the option of restarting the race entirely as well.

I can appreciate that Codemasters maybe wanted to make their own type of game. However, considering they were the ones who started the Flashback/Rewind system (at least to my knowledge), for them to ditch it for a supposedly more “approachable” game, is a massive step back. Honestly, it just makes the game a basic expansion to DiRT Rally, rather than a new product. Sadly, this decision winds up as one of the worst things about DiRT 4. 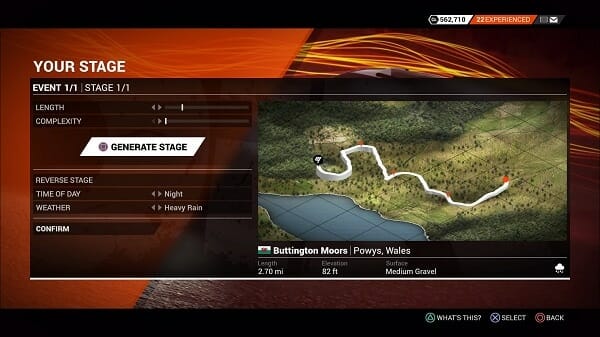 After being rather negative on something removed. There is one new thing Codemasters added, which is cool. And, that’s a track creator.  It’s not what you’d imagine when thinking of a traditional track creator either. So, it’s not where you lay out individual track pieces and build on them.  In DiRT, it’s a random track generator where you dictate length, complexity, time of day and weather. Then, the game randomly generates the track.  You can either save this design, or have it generate another track.  I would have liked a touch more control in this system. But if simulation Rally type racing is what you love, it really lets you play for a long time.

Overall Thoughts: 7 out of 10. I really wanted to like DiRT 4 a lot more. But sadly, I didn’t.  I think what I want out of the franchise, is different from what Codemasters wants. However, since they own and create it, they have the ultimate say.  DiRT 4 is still a great racing game for the simulation-minded racers out there. However, if you’re in the market for anything more stylistic, or approachable, you’ll have to look elsewhere.

For the sake of transparency, the publisher (Codemasters) provided a digital code for review purposes.