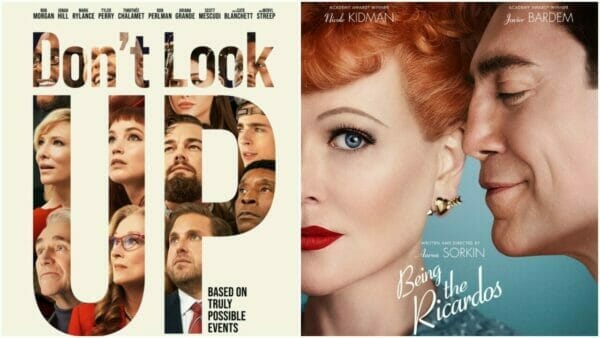 Don’t Look Up (2021) from Netflix is a satirical black comedy written, produced, and directed by Adam McKay and starring Leonardo DiCaprio and Jennifer Lawrence as two astronomers attempting to warn humanity about an approaching comet that will destroy human civilization. The comet is an allegory for climate change and the film is a satire of government and media indifference to the climate crisis. Supporting cast include Rob Morgan, Jonah Hill, Mark Rylance, Tyler Perry, Timothée Chalamet, Ron Perlman, Ariana Grande, Scott Mescudi, Himesh Patel, Melanie Lynskey, Cate Blanchett, and Meryl Streep. Grande and Mescudi also collaborated on the song “Just Look Up” as part of the film’s soundtrack. The film is dedicated to Hal Willner, who died in 2020.