Editor’s Note: We would like to thank Stewart Lange for allowing us to have a review partnership with FPG News. This particular review of Dynasty Warriors 9 comes courtesy of that partnership. If you’d like to read more from FPG News. Please visit the link above.

Stewart Lange: Dynasty Warriors has been around for years, with its over-the-top take on the rise of the Chinese Empire. The series is most famous for its big action battles. Dynasty Warriors 9 is the first game in the series to make the jump to an open world setting. Unfortunately, it’s a jump that just doesn’t work well in this entry. There’s a sliver of promise that could be tweaked and made better in the future. But DW9 feels sloppy, unfinished and most importantly, is an absolute chore to play.

Paul Leazar: Dynasty Warriors has an interesting history. The series itself, spun out of Koei’s long running Romance of the Three Kingdoms. Since the series inception in 1997, Dynasty Warriors has become the biggest, and most successful, franchise for the company. The success of the series has lead to a countless number of spin-offs into other franchisees across a wide array of media. As seems to have become tradition, Dynasty Warriors 9 completely changes everything about the franchise to set the ground work for the upcoming installments. It seems par for the course that, naturally, there would be some issues. For many, these would prove to be more then beyond counting. I, however, seem to be in a very small majority that 1) had zero issues playing the game, and 2) seemed to enjoy the experience. 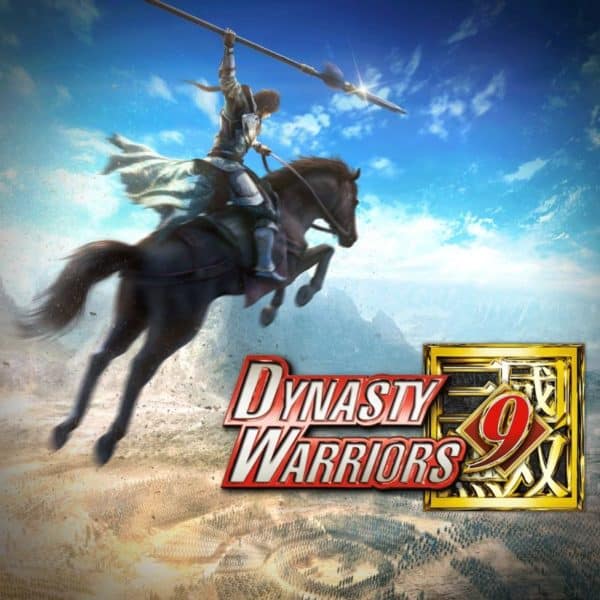 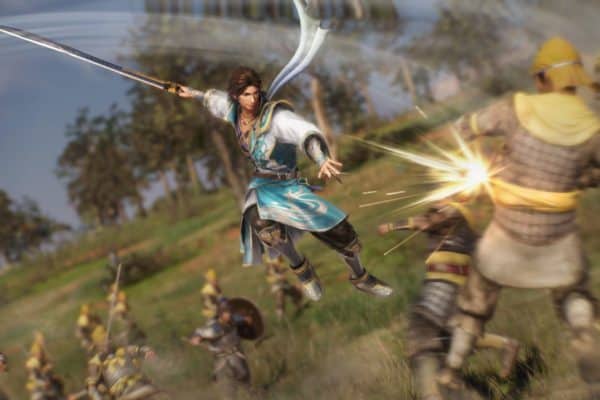 Stewart Lange: For those of you who may not be as familiar with the Dynasty Warriors series as others, you can choose to play as one of multiple Chinese warriors. Cutting through every enemy in their path on route to a showdown with an equally overpowered boss. It’s a simple but satisfying premise, with the sheer feeling of taking on literally thousands of foes at a time being the hook to keep you going through the battles and the chapters.

Paul Leazar: The gameplay within in the game remains simple for both old-timers and newcomers to the series. Hordes of enemies remain in the way of objectives on the map. It’s your job as the character you pick to mow them down, and complete the mission. Simple, fun, and yes, repetitive. However, on higher difficulties, this becomes a bit of challenge. 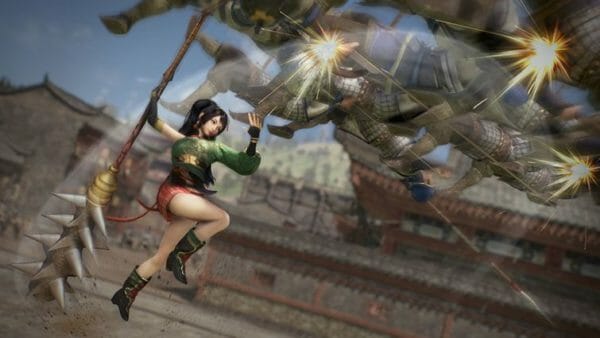 Stewart Lange: DW9 removes this dynamic, and instead uses an open world. This new system creates a number of smaller battles around the map. Mainly providing little more than a slight reason to distract you from the horse ride between waypoints. Very shortly into the game, I actually stopped seeing any reason to get off of my horse for anything other than a boss fight. Since there’s just no requirement to do so. In a game that allows you to take on waves upon waves of minions at a time, a pocket of 10 enemies is merely an annoyance.

Paul Leazar: There a whole host of new features to the series with this game. Primarily, the open world. China has been cracked open for you to explore, and it’s filled with several of the same tasks you’d find in your usual open world. There are resources for crafting (both items and different levels of all of the character’s weapons), bases to conquer, watch posts to climb to see the map, as well as reveal several important sites nearby (mostly material locations), and different sorts of wildlife and bandits to hunt. Also, fishing, but I’ve done so little of that it’s a pretty forgettable feature.

For me, part of the fun is playing as the overpowered character mowing down countless waves of enemies. Also, conquering bases lowers the difficulty for nearby missions. This becomes quite critical as the side missions usual drop the materials you need to unlock higher tier weapons for the characters. While I haven’t ventured outside of normal (or finished playing with the original character I selected), I wager this could be very important on the Chaos difficulty setting. 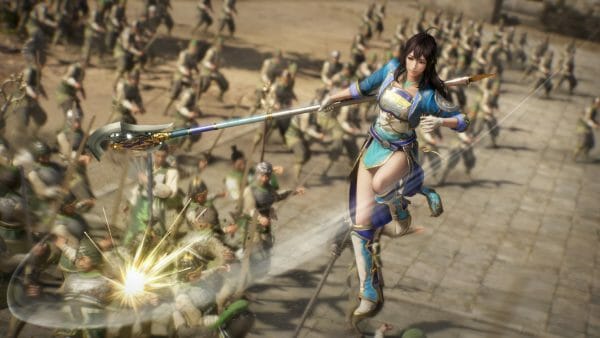 Stewart Lange: Using your horse to ride between small battles isn’t fun and doesn’t feel in any way like Dynasty Warriors. The large battles and boss fights are good fun, but getting between them is just so mind-numbingly boring. Small side missions and collecting herbs to craft potions feels like it’s been taken from other games and slotted in here for the sake of it. Furthermore, the horse riding doesn’t even work well, to begin with.

Paul Leazar: For me, horses have always been a side feature within the game. It’s never been important outside of how fast they can get you around the map. They added a leveling system in this game for horses now, and each horse has a different type. I can only assume the actual named horses throughout the series (such as Hex Mark for example) are unlocked much later in the game (although Red Hare remains noticeable absent according to my reading and research).

Riding is fairly basic, and proves to be very important as far as getting around. The open world is big (and a little too empty for my taste), but playing on my PC, the graphics are nice. They’re the usual fair for Dynasty Warriors (this game won’t win a beauty contest by any stretch of the imagination), but it’s really cool to see all the cities and big locations have very distinct flavors to them. 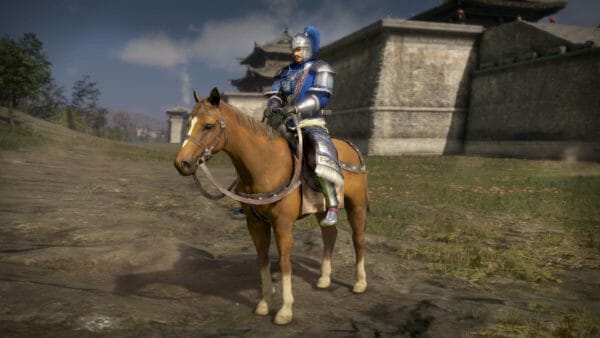 Stewart Lange: You can call your horse right to you, with it sometimes even dropping out of thin air. It moves sluggishly like a carousel horse, making it hard to avoid running into some of the obstacles that dot around the environment. If you’re feeling especially brave, you can even engage auto-run in certain places, and this just causes even more unnecessary crashes. 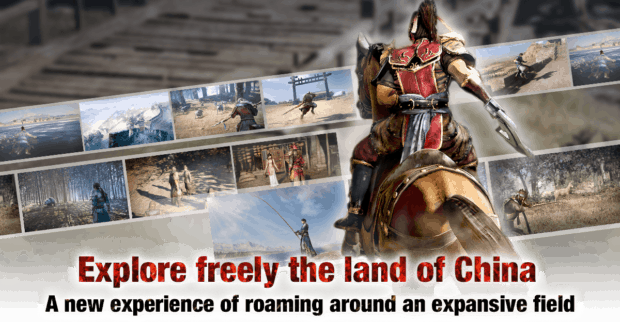 Stewart Lange: Dynasty Warriors is a simple enough premise for a game and what Dynasty Warriors 9 does is muddy that down by taking parts from Assassin’s Creed, The Witcher and other open world games. Doing none of them any kind of justice in the process. This may be one of the most boring open world experiences I’ve ever had.

It’s dull, ugly and even the crazily endearing parts of the series are made into annoyances. The guitar music doesn’t fit as well as it once did, the voice acting isn’t stupidly amusing anymore, and apart from one big battle that shows up about once every 40 minutes. The rest of the game has nothing fun about it.

Paul Leazar: Here, I might agree with Stewart. There are a lot of the same things you have to do over and over again. If you’re not a long time fan of the franchise, and you’re expecting more, or you have a higher standard for games these days, this will be disappointing. It’s pretty easy to see a lot of the influences that DW has borrowed from, as Stewart mentioned as well. The watch post pan around, for example, might as well have just taken a plane ride from Assassin’s Creed to ancient China. For me though, this doesn’t take away a whole lot for me. However, as I mentioned above (and on PC at least), the sights remain pleasant. The color palette is very earthy, but I think this makes the bright colored characters stand out much more.

The English voice acting just plain sucks now though. I had gotten used to a lot of the voices that had been in the games over the years, and was just utterly heartbroken at hearing the new voices (and how bad they were). The Japanese voices are great though, and if you do play this, just leave the subtitles on. Your ears will thank you.

Stewart Lange’s Overall Score: 3.0 Out of 10 Sadly, this is a short review for a game I should have been telling you was an over-the-top, non-stop action ride. On almost every level Dynasty Warriors 9 disappoints. The graphics are a slog that sometimes barely reach 20 frames per second on regular Xbox One. The open world setting is boringly empty. In fact, it takes away much more from the Dynasty Warriors experience. Honestly, it almost feels like the game was released unfinished to meet the release date. Dynasty Warriors 9 winds-up a shameful disappointment and is probably the worst game in the series to date.

Stewart reviewed the game using a retail copy purchased by Stewart himself.

Paul Leazar’s Overall Score: 6.5 Out of 10 I’m not a pro at game reviews or anything like that, but I know what I like. The experience Dynasty Warriors 9 has given here was enjoyable, and as advertised. On PC, I have had absolutely zero problems running the game, and have had no crashes. However, the new systems it introduces, really do need an overhaul. Crafting becomes sort of useless after a time, and adding some more flavor to the open world activities would be much appreciated. I’ve enjoyed my 30+ hours with the game so far though, and while far from perfect, still scratches that itch for me.