Editor’s Note: We would like to thank Stewart Lange for allowing us to have a review partnership with FPG News. This particular review of EA Sports UFC 3 comes courtesy of that partnership. If you’d like to read more from FPG News. Please visit the link above.

The newest installment in the EA UFC series is the delightfully named UFC 3. However, not much has changed with this release. The game does feature an updated roster, HDR and 4K support where applicable and a few gameplay tweaks. But more so than previous entries, this seems like a much hollower experience all-around. The fight presentation does have a nice shine to it, but this is the first MMA game since the PlayStation 2 that has just left me feeling rather unsatisfied. 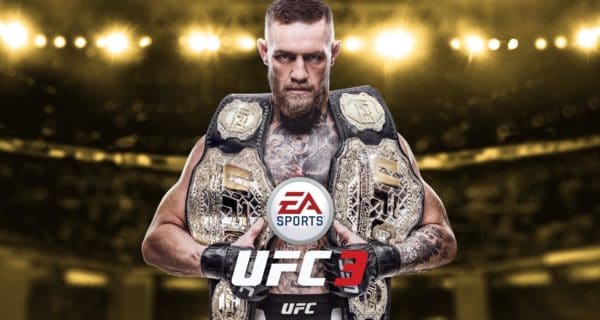 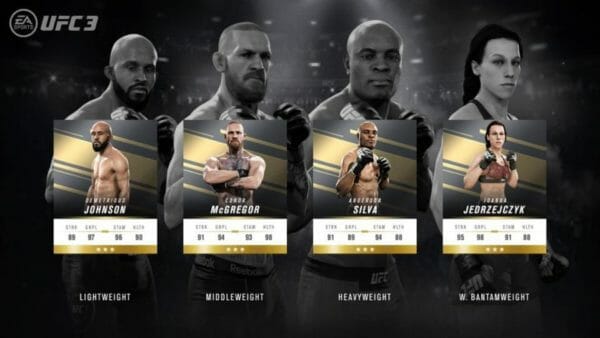 As with the previous game, UFC 3 features the inclusion of Ultimate Team. The EA money printing machine that allows you to either unlock or spend real money, playing as characters you can play as in other parts of the game. As well as, unlocking moves and perks. Given that MMA is a 1-on-1 sport, it’s odd for it to be so focused about building a team of fighters. Especially given that it’s not really laid out in the way of a training camp or gym.

During my time in the lower levels of Ultimate Team, I only had four out of around 15-20 fights that didn’t end up being “mirror fights.” Where I faced a fighter I had previously selected. I can appreciate this happening once or twice online. However, when it’s in the single-player portion of the mode, it comes off as slightly lazy. Although I personally disagree with the concept of Ultimate Team, mainly because I feel like it’s technically gambling, obviously this is something EA isn’t dropping anytime soon. 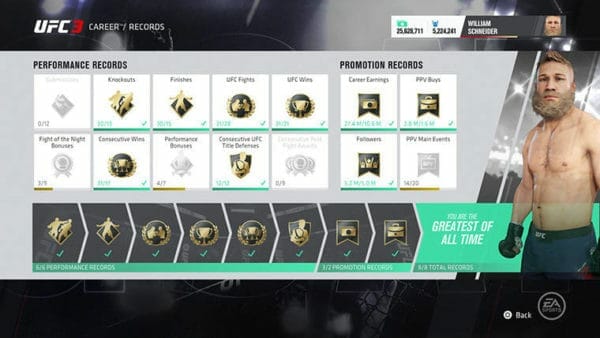 The career mode seems as though it’s more involved in-between fights this time around. But it feels more like a smoke screen, due to the actual training for attributes being stripped back. In UFC 3, this portion is entirely simulated. The only time you’ll get to train between fights is by playing increasingly unwinnable mini-games, which unlock new moves and perks. They do start nice and easy, but when you’re trying to land 20 knee strikes in 30 seconds against someone who doesn’t want to be stuck in the clinch and can take you down consistently, it quickly becomes an annoying button-pressing exercise. That is until you can get into the cage and fight for real. The addition of a more interactive social media portion is a nice touch. Although, it didn’t do much for me. At least it gives you something to read during loading screens. 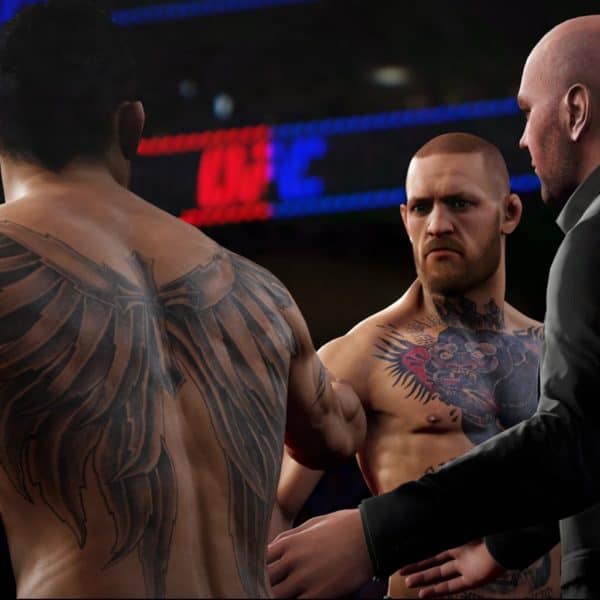 Given the fact it’s maybe the biggest part of the game, let’s discuss the fights themselves. If you’ve played a UFC game over the last couple of years, then this should be familiar enough. The only big change comes in the form of a mid-level block. The animations are crisp and the fighter damage looks great. Cuts and bruises appear on worked over body parts. The damage inflicted absolutely looks the best it ever has. In particular, the blood stains on the canvas and swollen faces appearing, even after only taking one bad punch.

In addition, I inadvertently found a nice extra detail that I’d be lying if I said 100% wasn’t in a UFC game before, but after a few, too many checked leg kicks, my character collapsed holding his leg and lost the fight by TKO. The stamina management is key to surviving the fight in UFC 3. Despite being a little frustrating to figure out at first, it does remind you that if you come out the gates swinging, it may not bode very well for you later in the fight. This adds in the same realism you’d see in a true UFC fight. That after 200 punches thrown in the first two rounds, by round 3 most fighters would struggle to be able to lift their arms very high. UFC 3 also adds a health indicator under the stamina bar, which shows damage taken by each body part. However, it did seem that the A.I. was a bit more durable than my character. on certain occasions, I found myself a victim of a flash knockdown or knockout, even though I’d thrown everything but the kitchen sink at my foe. 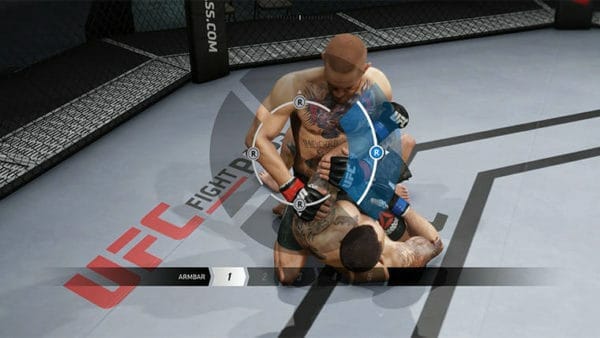 At its core, the submission and ground game is unchanged. But there is a Simple Submission mode, which changes the grappling struggle into a quick time event. This is much better for people who maybe aren’t very good at this part of the game. Although, it does feel a little cheap to use if you’re experienced, or are able to lose a fight by submission without feeling cheated. If anything, the cheap knockouts do more to raise the blood pressure. Whereas in a submission struggle you feel like you “earned” a defeat.

Overall Score: 7.0 Out of 10. This is another solid entry in the UFC series. However, the use of Ultimate Team does seem to be forcing micro-transactions down your throat a lot. This is almost forgivable, as a solid career mode and arguably the best fight presentation yet bring this back up to speed. If you can get around a few balancing issues within the fights themselves, you’ll have a good time with this game. Just don’t expect it to change your life. Ultimately, UFC 3 is absolutely bringing MMA to the tried and true EA rinse and repeat cycle of sports games.