Futuristic racing games used to be all the rage, for two decades from the 90s and through the 2000’s. Franchises such as F-Zero and Wipeout continuously had releases next to the more familial Mario Kart and realistic racers like Gran Turismo. However as the latter types of racing games have kept thriving, the former aforementioned franchises haven’t released actual new games since 2004 and 2012 respectively. Indie studio Repixel8 aims to bring some of that nostalgia and fun back with Gravity Chase. And although it generally accomplishes those two things, the feeling it gives you is absolutely fleeting. This is the Gravity Chase Review. 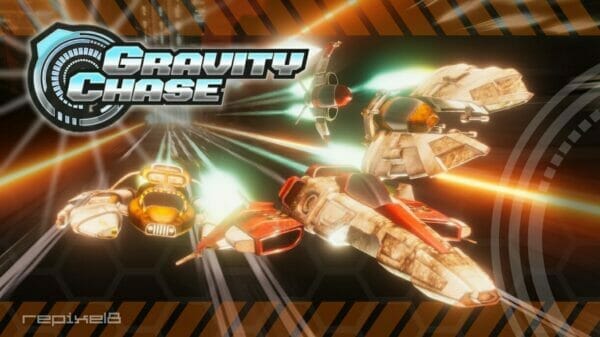 Gravity Chase emulates its inspirations well, providing an exhilarating racing experience across 16 different tracks. Each track features a set number of laps with eight racers competing against each other in three distinct formats. There’s the typical arcade mode which is simply trying to get past the other seven racers and claiming the top spot by the end. Combat mode throws blasters, ammo, and shields into the mix that you have to use wisely in gaining an advantage that perhaps may help you find a path to victory. Finally, there’s Eliminator Mode which forces you to steadily make the climb ahead of the nearest racer to avoid being internally combusted. Plus, all of these modes also have three difficulty options as well. So if a certain track is just impossible for you, lowering that difficulty may assuage the torture. Likewise, if things are too easy on Advanced mode, there’s always the Expert option too.

Regardless of which game mode you choose, mastering the essentials of racing in Gravity Chase are the same. The first lap exists for gathering of boost shards, or if playing in combat mode, the ammo or shield shards. Once the second lap hits, all of those shards become active and you can use them however you so desire. I found that it was hard to make much progress on the first lap and you needed that second or third lap to gain momentum either by constantly using the boost or by pathing through the various boost pads that exist on each track. Negative boosts also exist and they purposely slow down your racer. There’s a constant tussle in finding the best navigation route for each track, including making quick twitchy movements that may result in moving the camera in a 360 motion. Depending on how fast you’re going at the time, the space racer can even go in multiple dizzying circles. So be careful if you are someone that easily gets nauseated.

Even on the game’s normal difficulty, Gravity Chase features some challenging A.I. that always seems to know the best route, forcing you to either follow or go your own way. However, being steadfast on the path is advised, as too many negative boosts may put you firmly behind the pack rather swiftly.

And while Arcade and Eliminator mode are straightforward, the Combat mode has some issues. Particularly, in its shooting mechanics as it’s difficult to see when you are being shot at, making the shield shards almost useless because usually by the time you realize what’s going on, you are on the brink of exploding. Compounding that with the case that there’s only one repair shard available per lap, it can make things dicey on certain tracks. There are also tracks that feature rough corners seemingly out of nowhere, so if you go too fast and can’t keep control into the center, you may wind up exploding a few times there too. 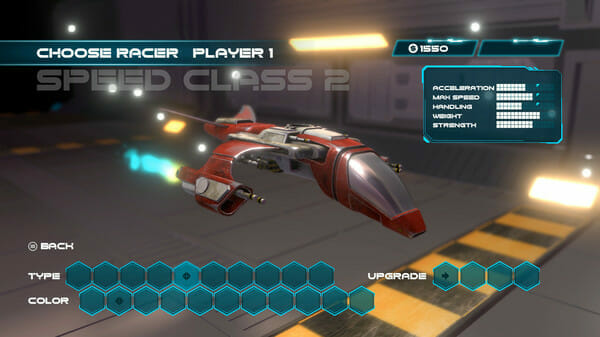 After each race, a certain amount of points and income are obtained depending on your ultimate placement. Obviously, a 1st place finish grants you the most amount of both, while an 8th place finish, nets the lowest amount. The points are put into a leaderboard, while the income gives you the ability to upgrade any of the ships. Each one of the space racers is available from the beginning. So, although you don’t have to unlock any of them, each speed category does have its advantages. I decided to upgrade one of the Speed 2 racers and although it does not max out completely, as a Speed 3 racer does, it actually becomes more useful rapidly. The Speed 2 Racer helped me get 1st to 3rd on most tracks before even hitting the allowable upgrade limit. Conversely, the Speed 3 racer wasn’t useful until I almost had it maxed out completely. Other than the Speed 3 racers being a bit harder to control at first, I’m not really sure what purpose the Speed levels actually serve quite honestly.

Forcing Myself to Play

Unfortunately, Gravity Chase suffers from a major issue that plagued my entire time with the game. Once the nostalgia ran its course, I quickly found myself at odds as to why I needed to keep playing it. Although it does have four-player local co-op, there’s no online play at all. So, if you don’t have any friends or family to play the game with at home, you are stuck only playing against the A.I. Yes, as I said earlier, the A.I. can be challenging, especially on certain tracks. And technically, you do have an incentive in continuing to keep racing until reaching level 15, where you can unlock all of the tracks.

However, by the time you get to around halfway through the levels, you start seeing a lot of repetition. The tracks do have some differences but there are two or three base layouts that add a different backdrop. The leaderboards serve no real purpose outside of just seeing your name against a bunch of generics like Alex or John. I also felt no need to keep racing to upgrade ships either, as once you have a few of them upgraded, there’s really no reason to keep grinding for points, unless you are an achievement hunter. Essentially, the game just felt like a grind to unlock one track that may wind up looking very similar to another track that’s already available. And as much as I do enjoy the racing, it ultimately rings hollow.

I will say I did quite enjoy the electronic music in the game. There are some truly bumper songs in the soundtrack, including the knock-off instrumental version of The Weekend‘s Blinding Lights that plays during the introduction.

This game was reviewed using an Xbox One digital code provided by the developer through the Press Engine App.

Gravity Chase certainly provides some fun moments in small doses, especially if you have friends or family to play with locally. The racing is fast and fluid, with no moments of slow down at all. Also, a nod again to the head bobbing soundtrack as well. Sadly, the game suffers from feeling grindy and empty, as much of what remains aside from the races themselves just sort of exists. To be fair, it is does have a rather low entry price, so anyone that’s feeling nostalgic for some Wipeout may want to give it a shot.