In 2013, Josef Fares moved from the world of movies to the world of video games. His first attempt, along with the rest of the Hazelight Studios team, was a game called Brothers: A Tale of Two Sons. Brothers did something I had never seen another video game do before, it made you feel the connection between two characters by making you control both at the same time.  Each brother was controlled by each of the thumbsticks, and once you got the feel of the controls, it was one of the most innovative games I have ever played.

The follow-up, A Way Out (2018), took the idea of controlling two characters through a story of breaking out of prison. Turning it into a wonderful couch co-op experience.  Bringing back a style of play that seemed lost to time with games moving more and more online, A Way Out made you work with your gaming partner to work through puzzles and get through obstacles to overcome the odds.

Three years on from A Way Out Fares combines major ideas from his previous games and melds them together in one giant experience with It Takes Two.

It Takes Two: The Ultimate Version of Co-op Gameplay 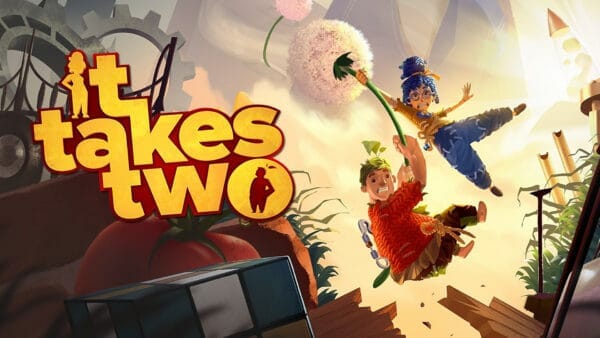 It Takes Two< takes the couch co-op gameplay from A Way Out while telling the story of two family members working together to resolve a problem that has fallen on them like in Brothers: A Tale of Two Sons. However, this time you and a partner control husband and wife, Cody and May, who have seen their relationship slowly fall away and are now in the midst of working on a divorce. The game begins with the two discussing how they are going to tell their only child, a little girl named Rose, who happens to be in the window and overhears their conversation.

Rose, heartbroken by the news, runs to her play area in the garage to try and figure out how she can save her parent’s relationship. She finds a book written by Dr. Hakim, which talks about relationship therapy and she clings to the book, as well as two dolls she created of her parents. Story magic occurs and Cody and May are transformed into clay and wooden dolls and the hijinx begins.

Honey, I Shrunk the Parents

Stunned at the sudden transformation, Cody and May go right into arguing about whose fault it is that they are in this strange situation. During the argument, a living book appears as Dr. Hakim himself, ready to save the relationship. Dr. Hakim is a very interesting character as he is very over-the-top and animated, about absolutely everything. There are points in the game where he can come off as very annoying, but I think that is sort of the point. He is there to help Cody and May proceed in the correct direction and to give them someone to be mad at instead of themselves.

Speaking of finding someone to be mad at, Cody and May are constantly throwing barbs at each other. There are many times while playing through the game that my girlfriend, who was kind enough to play through the 10+ hour story with me, and myself wondered if this was a relationship that really needed to be saved. Obviously, the story is about the damage divorce can do for the children in a relationship, but these two seemed like they had gotten to the point where they were just not even pretending to be nice to each other.

Variety and Balance is the Name of the Game

As Cody and May try to find out how to return themselves to their original forms, so they can get that much wanted divorce, the two travel through seven different unique areas of the house. Each area not only changes the visual design of the game but also completely changes the way the game feels. At the start of each new chapter, Dr. Hakim brings up a new thing to work on in their relationship and gives each of them the power to help represent his point.  Those powers are then the central aspect of that area which helps keep the gameplay fresh throughout the playthrough.

For example, in one stage, Cody is a strange plant that can grow out its neck and create platforms for May to jump on, and in another, he is running around with a symbol that he uses as a shield. Meanwhile, May is able to duplicate herself in one stage to help bounce from one area to another, and in a different section of the game, she is armed with a rocket launcher. None of these powers feel like they overstay their welcome too long and really kept us on our toes as we tried to figure out how to best use each power in the different situations each stage threw at us. At the end of each area, there is a boss fight that does an amazing job of testing your capability to work together and use your separate powers in the best possible way.

Overall, there is a great balance of difficulty to It Takes Two. Especially, if you use this game to help introduce a loved one to video games. My girlfriend actually has a good amount of gaming experience, but a life with kids has really taken away her gaming time over the past few years. Even then, there were several points where we struggled to advance. It Takes Two does not hold your hand at all. The game is designed to make sure that you earn those ending credits.

On the flip side of that, there are no lives to worry about. When one member dies they do not just sit back and watch the other play. Instead, if one character dies, they must mash a button to revive themselves, and as long as they do so before the other character dies they are allowed to return. Only if both characters are down at the same time must you restart from the last checkpoint. On top of that, the checkpoints are frequent and bosses allow you to progress through stages of the fight. This is another aspect of the fantastic balance I mentioned earlier, we felt our gaming skills were tested and we really had to work together to progress. However, we never felt like we were going to be stuck in one area for too long either.

Thankfully, the level of variety did not stop at just the level designs and the powers Cody and May are given. Throughout the game, there are 25 hidden mini-games to find and experience. Most are not actually very hidden at all if you just explore the area a little bit. The mini-games are fun little distractions and can bring out the competitive nature of you and your gaming partner. They go from games based on paintball, to races, to shooting hoops and even a fully playable game of chess.

The minigames, powers, story, and platforming combined, would normally be good enough, but Hazelight Studios went the extra mile and filled the game with easter eggs and fun references.  I will not spoil any of them in this review, but the girlfriend and I laughed multiple times as we would run into a new reference to different movies and video games. It just shows how much love and effort was put into this game and when playing a game like this, really helps it stand out.

This game was reviewed using a digital code provided by the publisher (Electronic Arts).

It Takes Two is the perfect game to try and get your significant other into video games. There is a bit of a challenge to the game, but the attempt at getting Cody and May to find their previous bond is a lot of fun for a couple to play through. Even if you do not play it with a significant other, this is a game that I recommend to anyone who enjoys working through puzzles with a partner, or someone that just wants to experience a fun story and likes platformers.  For the record, the girlfriend said she would rate it an 8.5.  When I told her that she could not do decimal points, she decided on a 9 and I agreed.