Judgement comes from many of the same people behind the Yakuza series games. So it is not too big a surprise that it elicits the same feeling of discovery Yakuza 0 had for me. It does have a few quirks, and one major issue (which I’ll get into below.) In short, Judgement is a superb game that will certainly be in my final list of best games of the year for sure. 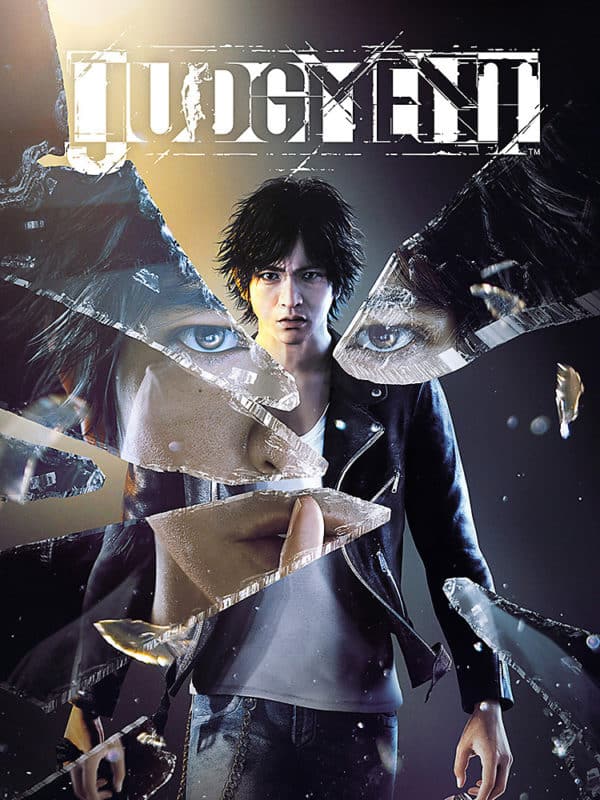 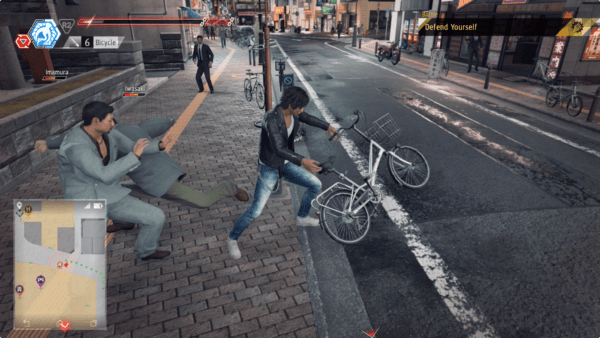 Judgement stars Takayuki Yagami, a former lawyer turned private detective. He, along with his ex-Yakuza friend/employee Kaito get embroiled in events surrounding a serial killer in Kamurocho. You (as Yagami) get on the case of hunting down the serial killer and bringing him or her to justice. Along the way, you’ll get enmeshed in the politics of the city, into some of the Yakuza clans running the city, and doing side cases for a multitude of people within the game.

On the bare surface, and if you ignore the main character, Judgement could easily pass as another Yakuza game. It’s in the same city, most of the fundamental gameplay mechanics are the same, heck even some of the arcade games are the same. But, the devil is in the details and there are a few additions and omissions that make Judgement a more unique and rewarding experience than some of the past Yakuza games. 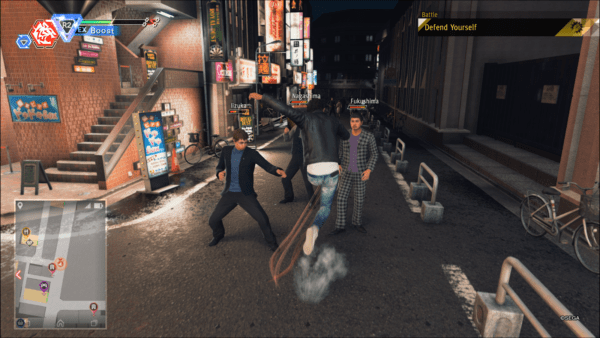 Yagami has two different fighting styles, Crane and Tiger. Crane style is meant for groups of enemies. While Tiger is generally for one-on-one fights. Honestly, I used Crane for like 90% of the game. Mainly because even against solitary bosses, it is still highly effective against them.

The rest of the battle system is very much the same from Yakuza 6: Song of Life or Yakuza: Kiwami 2. You have light and heavy attacks on square and triangle, with the grab button being circle. Instead of Heat Actions from Yakuza, you have EX Actions but they are the same thing. They even re-using animations from Yakuza 6 with certain objects or situations. The only real difference is the Wall-Run Attack. 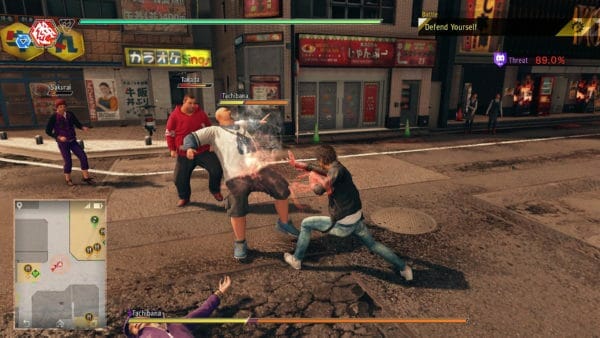 Wall-Runs involve you sprinting at the wall and running up it about four or five feet. You can then launch yourself off of it to deliver a Superman-like punch to an enemy. The attack looks cool but is pretty situational. For instance, it only really works if you run before using the attack. This is also the case for approaching a wall as well. Consequently, if you try to perform a Wall-Run too close to a wall, you’ll just bounce off it. For the most part, Wall-Running is effective against certain enemies (usually bigger guys or bosses) and sort of homes in on the nearest guy.

Another slight change is that Substories are now called Friend Events. The name doesn’t really matter because they are essentially the same thing from Yakuza. You’ll meet random people and need to do something for them. For example, you may need to bring them an item, save them from being beaten up, do some dialog options, and other things. Eventually, they can become your friend, which usually means they occasionally give you an item in the game world or they try to help you out in random street fights you may get into.

The Detective is on the Case

In addition to Friend Events, you can also complete Side Cases as part of your detective agency. Honestly, these are almost exactly the same as the Events, but they use detective elements instead. Although most of these still boil down to eventual fights, with some deduction work involved. At least you earn quite a bit of money for completing them though.

Examining the Good and Bad of a Detective 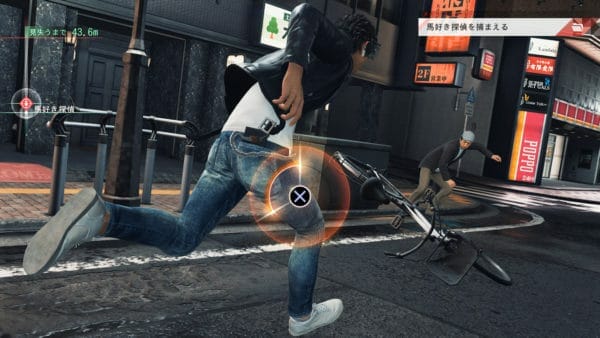 The detective elements are the stand out feature of Judgement and ultimately are a bit of a mixed bag. You can use a drone to survey some buildings and spot specific persons of interest. Also, in some rooms, the game goes into a first-person perspective and forces you to find specific things in advancing the case or to get through the building. Obtaining items like: key cards, maps, or important files is also another factor as well.

This stuff all works decently well but can also get aggravating at times if you can’t find the one thing you need to actually advance the case. Aside from that, there are also locks to pick, which use two different lock picking mini-games, but neither is hard or really annoying.

Other times, you’ll need to chase a fleeing suspect around Kamurocho, which is a Temple Run-like mini-game. With limited control over Yagami, you chase the person around from a somewhat pulled out behind the back perspective. Quick Time Elements appear here as you have to press the corresponding button or movement icon to get closer to the objective. These chases aren’t ever “bad”, per se, but the controls are a tad cumbersome. Not to mention, these chases are incredibly scripted, so it winds up in a QTE fest and not actually a dynamic experience. 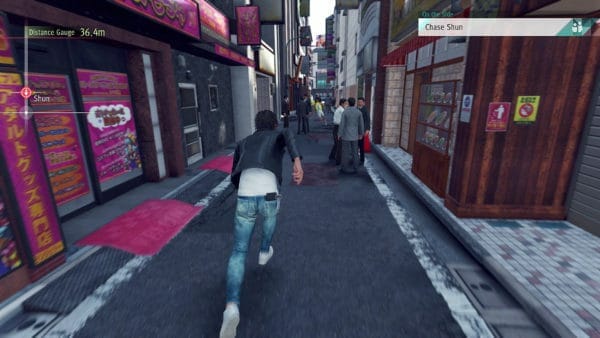 By far the worst detective element are the Follow Missions. You’ll end up tailing a lot of people in this game and it’s all so tedious. Some people won’t be so bad, only going a few blocks to get to their destination, but others lead you around half the city, so it becomes a five minute long quasi-stealth sequence.

The basic gist is that you have to follow someone around, keeping them within viewing distance but not close enough for them to become suspicious. The person sometimes turns around, and there are Blend Points that light up where you can just wait until they turn back around. If you lose track of the person, you’ll have a timer to find them again, otherwise you have to restart the mission.

This whole system feels like some weird Assassin’s Creed mechanic. I can understand the idea of tailing someone, but the system they came up with just seems very archaic, if even a bit random. Why would Yagami have to follow the person at all? He literally has a drone that he can fly across the city, why not use that to track the person? These tracking missions aren’t game-breaking or anything but they are one of the real annoying aspects that you’ll have to do over and over again.

As far as the other usual side content in a Yakuza game, most of that is still in Judgement as well. Darts, Sega arcade games, UFO catchers, Mahjong, gambling, dating women, are all in here. Unfortunately, there is the big omission of Karaoke. Judgement is a slightly more serious game than Yakuza, which is fine, but man, not watching/hearing Yagami belt out some songs is a real missed opportunity.

There are three big new side things you can do: Kamurocho of the Dead, the VR game and Drone Racing.

1. Kamurocho of the Dead: is a game at the SEGA Arcade. This basically a version of House of the Dead using the controller to aim and shoot zombies. There are limited shots before you have to reload, a few grenades to deal massive damage, all while trying to escape Kamurocho alive from zombies and other creatures trying to kill you. It’s not bad, but the first-person aiming cursor is a tad slow.

2. VR Paradise: This is an interesting thing, it’s basically a Mario Party style game where you can earn a ton of money. You roll a dice and move Yagami around a board game, either landing on prize spots (to get money or items), mini-game spots (lock picking), or fight spots, where you have to face enemies under different conditions.

There are also good and bad creatures on the board, the good ones dramatically increase your prizes and have lucrative mini-games. While the bad ones steal your stuff, and you have to chase it down. The goal of the game is to get to the end, but you have limited dice rolls, so you have to plan accordingly. To actually play this game, you’ll need a Play Pass that can randomly drop from enemies, or as rewards for certain side missions. 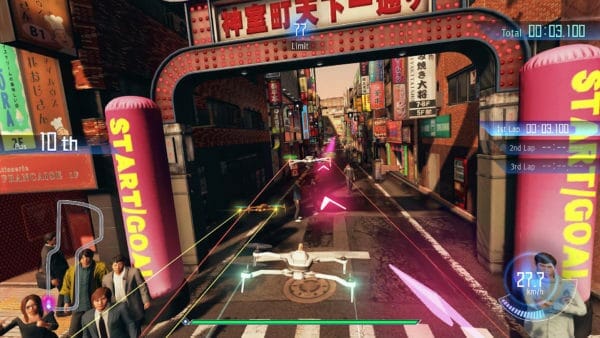 3. Drone Racing:, the worst part about the entire game. Honestly, the actual mini-game is fine, but other things about it are terrible. You race against other drones along a track, there’s a turbo meter that gradually fills up, boost circles to hit or repair your drone from hitting stuff as you race. As you do more racing, you’ll have to upgrade your drone accordingly, with new frames (body), engine, turbo, etc included.

The problem is that the Drone Racing is inherently unbalanced and all-but requires you to buy a $7 DLC pack to actually win the last championship. You want to win this championship because it gives you part of a pass to do the VR game an infinite number of times. Thus giving you an infinite amount of money. The DLC pack includes a frame for your drone that gives you six times the amount of durability as the one included in the actual game. For the last championship, you’ll be going through very narrow passageways at blistering speeds, so you’ll be taking a lot of damage. If your drone takes too much damage, it gets destroyed and you get no points for the race.

This may not actually bug a ton of people but it’s the biggest strike of the game to me. Why not just sell a money double DLC thing for $5? They are also selling those VR Paradise Play Passes, 10 for $1, which is still a tad gross, but not as disgusting as the Drone thing.

Judgement is a fantastic spiritual successor to the Yakuza franchise.  It has a more refined story, more complex characters and a slightly better battle system than the past Yakuza games.  I really enjoyed being a private detective in this game and I foresee that this franchise could go on for quite a while, especially with a few refinements here and there.  The only real downside is some of the DLC is incredibly gross, but that is a small issue in an otherwise great experience.