For over a decade, Kingdom Hearts has enraptured players with a story of a boy that sets out to save the world. Kingdom Hearts 2.8 Final Chapter Prologue is a collection that continues the entire series and cleans it up at the same time. Helping new and longtime fans as they prep for Kingdom Hearts III. The game features three stories: Kingdom Hearts 3D: Dream Drop Distance HD Remaster, Kingdom Hearts 0.2: Birth By Sleep: A Fragmentary Passage, and Kingdom Hearts: Unchained X: Back Cover. 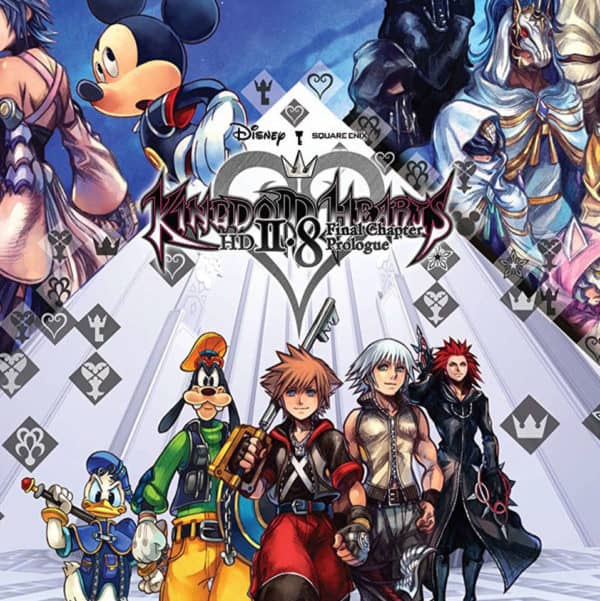 An Overall View of the Game

Simply put, the game as a whole is amazing and well done. It does what the title suggests. Using Dream Drop Distance to clean up any missing information with notes, reports, and chronicles systems. It is a lot to read, but the info helps the player avoid getting lost. Every cutscene viewed, or any flashbacks, allows players to see the story of past games as well as learn about past characters. Dream Drop Distance makes 2.8 worth playing through for anyone. Especially, if you want to be caught up before playing KH3.

The second game, A Fragmentary Passage is the prologue that leads into Kingdom Hearts III. Players find out what Aqua, a main protagonist of Kingdom Hearts: Birth by Sleep, did when she first arrived in the Realm of Darkness and it continues all the way through the final events of the original Kingdom Hearts game. After completing the three-hour adventure, players get a glimpse at the beginning of KH3. While also offering a glimpse into possible gameplay changes in store for KH3.

The third title is an easter egg for series lore. Back Cover focuses on the reason why the Keyblade War occurred. While also foreshadowing events in KH3 as well. What makes this collection distinct from the other two remix titles (I.5 and II.5) is that Back Cover and Fragmentary Passage are brand new additions to the series. 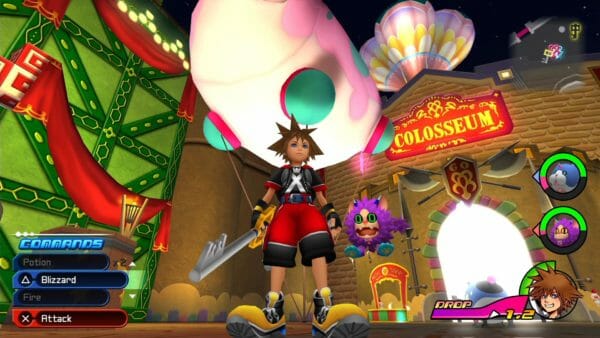 I played the original Dream Drop Distance on the Nintendo 3DS. I remember being impressed by the graphics and gameplay at the time. When playing it again on the PlayStation 4, I was floored with how good it looks and how well it plays. The controls feel very unrestricted as I used the Flowmotion mechanic. In the 3DS version, Flowmotion was somewhat limited, probably because it was truly too advanced for the 3DS to handle well. on PS4, there’s much more freedom in exploration. Jumping, running, sliding, everything in the Flowmotion mechanic is super smooth.

The Dream Eaters part of the game is still as cute as ever. Using the PS4 DualShock makes a bit more cumbersome when it comes to bonding, but for the most part, this still works well. Dream Eaters grow by earning bond points. Gain enough bond points and you can use them to unlock special abilities. The 3DS version used the stylus for navigating menus, which was much easier. 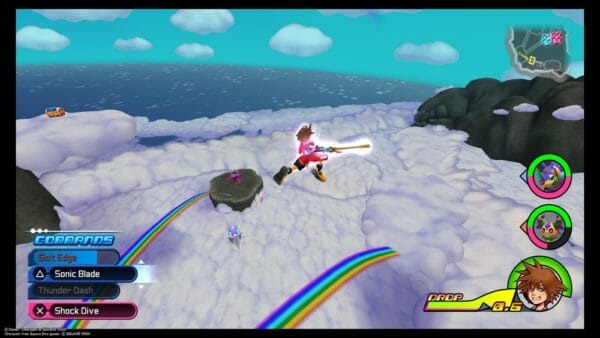 The use of the mini-games for the spirits such as Flick Rush is fun and light-hearted. It also gives you an incentive that the 3DS version never does. Making me want to go back and play Dream Drop Distance over and over again. Not just for the story but for the Dream Eaters themselves. In order to upgrade and create new spirits, you gather up materials found while traversing the worlds. Some materials can be purchased, or acquired by beating Nightmares. While some are only available if the player wins Flick Rush Cups and earn enough medals to redeem them in the shop.

The PlayStation 4 graphics improve Dream Drop Distance drastically. Featuring better lighting and color balance for Sora and friends. The 3DS couldn’t handle so much action on screen, so it felt very dark and dull by comparison. The PS4 version gives you a much better appreciation for the characters and worlds overall. 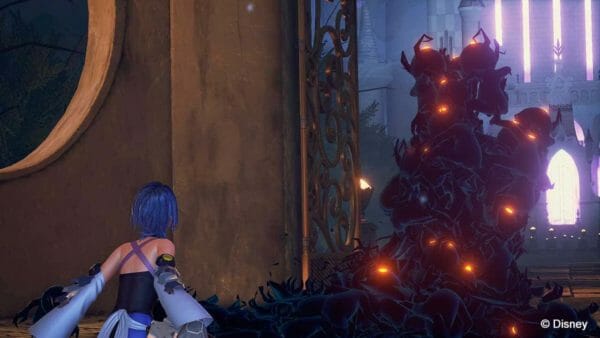 This is the one brand new aspect of the collection. Allowing for a distinct look at events fans have wanted to experience for a long time, while also teasing some gameplay elements from the upcoming Kingdom Hearts III. Players control Aqua and explore a short campaign of what Aqua went through after the events of Birth by Sleep. On a personal level, playing as Aqua is something that I’ve wanted for a very long time. I love her as a character, and here we see her at her worst. She has doubts on her fate in the Realm of Darkness and has doubts that everything is alright in the Realm of Light. Certainly a very emotional playthrough for me.

Fragmentary Passage uses a few different systems that perhaps those who only played the numbered games may not understand. First, you are actually rewarded for landing multiple keyblade hits or magic spells. After filling a meter that appears on the top part of the command menu, hitting triangle allows Aqua to transform the keyblade. Thus giving her more strength and special attacks. Also, doing multiple strikes of a specific magic spell unlocks a one-time use of the next level of that spell. For example, let’s say you use Firaga a bunch, eventually, you’ll see a command appear with triangle that says Firaja and it lets out a powerful explosion of magic that can decimate a heartless. 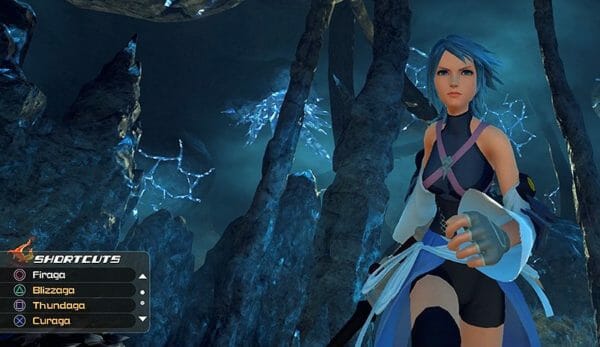 There’s also the Shotlock system, which is a yellow bar underneath the health bar. By holding down R1, Aqua can target multiple enemies at once depending on how much the ability is upgraded. This lets you let out a powerful blast striking multiple heartless. Although it seems best used on the Shadow Demon Wave’s which appear several times throughout the adventure.

Perhaps the cutest part about Fragmentary Passage is that you can dress up Aqua. With each objective met in the game, players receive clothing items. These include accessories for her hair, patterns for her outfit, wings, and shoulder plates. Aqua then actually shows off in-game whatever items you choose for her. 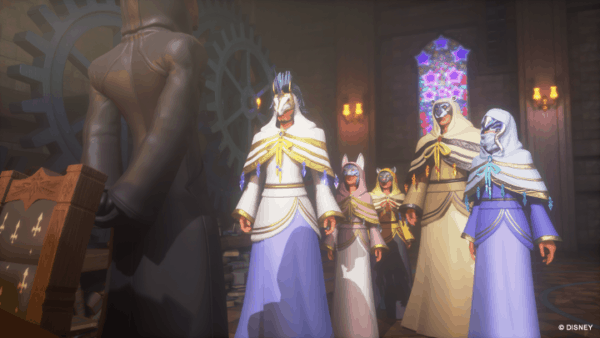 This movie was probably my least favorite part of the experience. I wanted to play as one of the foretellers instead. Giving players a chance to explore the world of the Unchained X mobile game would have been nice. Players of the mobile game played as their own character. That character would be part of the events that led to the KeyBlade War. The player would need to choose a union (which is underneath one of the aforementioned foretellers) and compete to get as much lux as possible each week.

Instead, Back Cover focuses on the five foretellers left in charge after the Master of Masters vanishes. Ira, Aced, Invi, Gula, and Ava are each given a specific role, aside from just being the leaders of a union. After discovering that there could be a traitor, tensions rise between them, and their actions result in an impending doom that resonates in the future of the series. 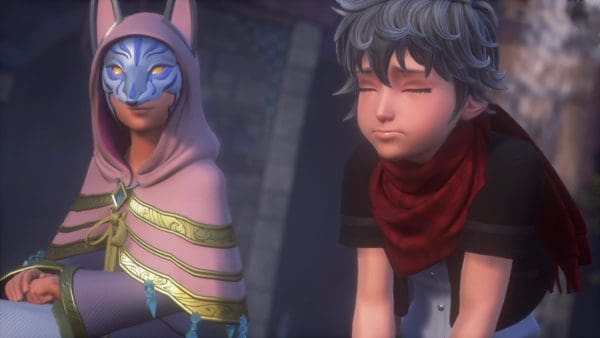 I don’t want to get into any more than that because it would be spoilers for those that actually want to watch it. The film lasts about an hour and at least continues the tradition of something in the collection being a movie.

Graphics live up to the beautiful series

New stories added, making the collection worth it for those that didn’t just want a Dream Drop Distance Remaster

Unchained X being made into the Back Cover film

Using buttons to bond with Dream Eaters, instead of the touch pad

Overall Score: 8.0 Out of 10 The collection is certainly worth owning for Kingdom Hearts fans. I loved the remastered version of Dream Drop Distance. It improves the graphics, gameplay, and fluidity from the original game. Fragmentary Passage is excellent. Not only does it let you play as a female character for the first time in the series, but you also get a sneak peek of future gameplay as well. Although I would have liked to play, instead of watching the story of Back Cover unfold, it is still a great help for fans trying to understand the story of how Kingdom Hearts all started.