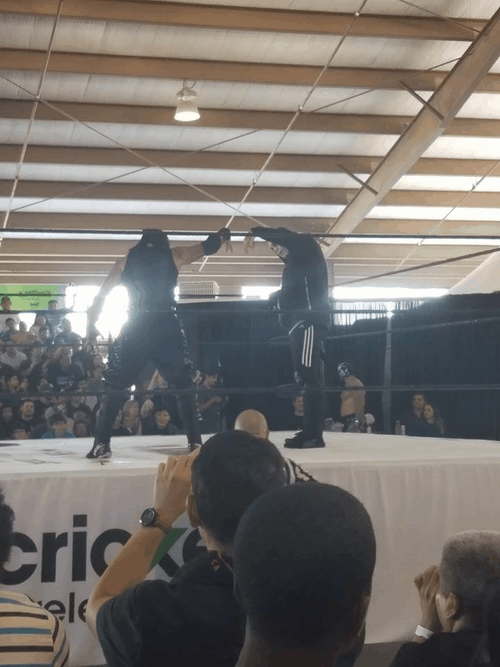 When I heard Houston was one of the cities Lucha Underground was traveling to for it’s three city free live tour, I knew there was no way I was going to miss it. By the time I arrived at 10:30 AM, there was a substantial line around area. They had a small exhibit displaying 2 championship belts, the Lucha Underground Trios Championship and the Gift of The Gods Championship. They also had displays for the costumes of Prince Puma, Mariposa, and Mil Muertes. The overall event was broken into two shows that lasted about 90 minutes with a total of 3 matches each. Each show was packed to the max, with fans watching from behind the gates. 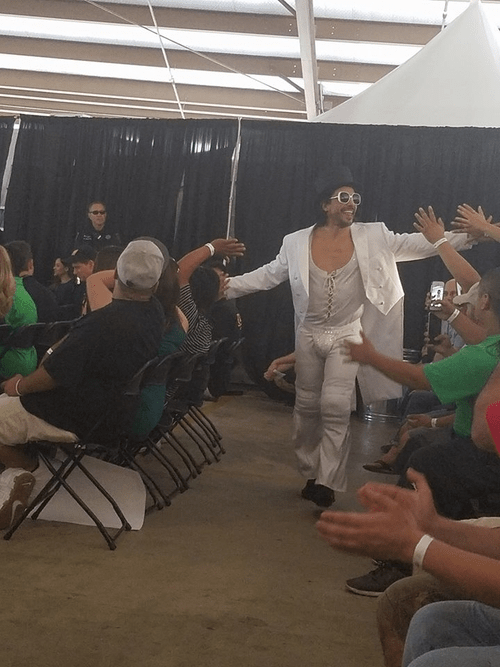 As soon as the crowd began chanting “creepy bastard” at Marty, I knew this was going to be an awesome event. This bout was a fun back and forth contest with Marty using his size advantage while Paul London countered with his agility. 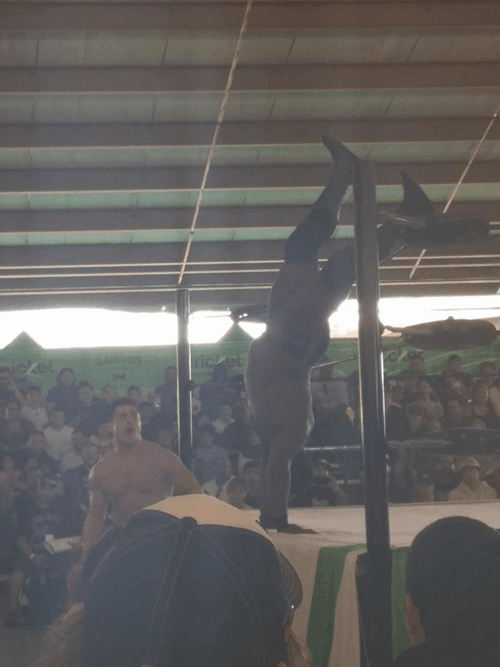 Match 2: Garza Jr. vs The Mack

No one seemed to know, including myself, who Garza Jr. was, so we didn’t initially react to him.  However, that quickly changed as soon as the bell rang. His ravishing Rick Rude persona quickly won not only the crowd over, but had all the females screaming like crazy. Garza Jr. had this cool spot where he threw his rip off pants in the air to distract the Mack, which allowed him to land a nasty super kick. It was a great heel move. I cannot wait to see more from him on TV. 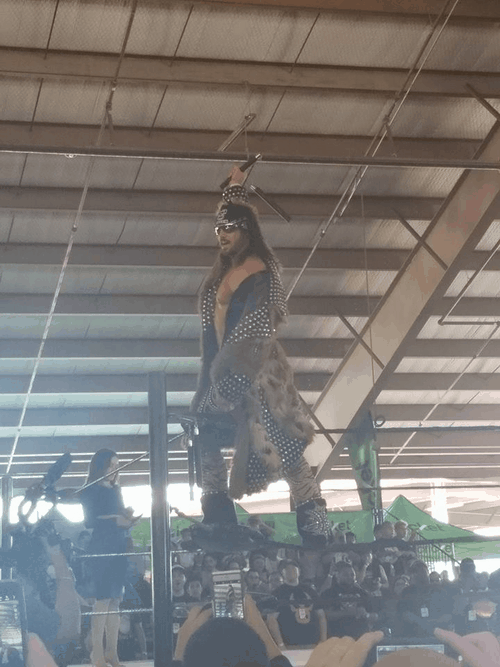 Match 3: Johnny Mundo vs Drago in a Nunchucks match

Winner: Johnny Mundo thanks to interference from Taya

Before the match began, Melissa Santos informed the crowd this match was going to be for the Gift of the Gods belt. This led to a hilarious 2 minute promo from Mundo basically stating he will not put the belt on the line, and that he will not only be the mayor of Slam Town, but be the king of nunchucks. I need to point out that TV does not do justice in capturing how fast Drago is in the ring. He was wrecking Mundo with those nunchucks. After Taya’s interference cost Drago the match, he mistakenly broke a pair of nunchucks on her back, leaving a nasty welt.

After the show, we were all escorted out to wait in line for about 90 minutes. 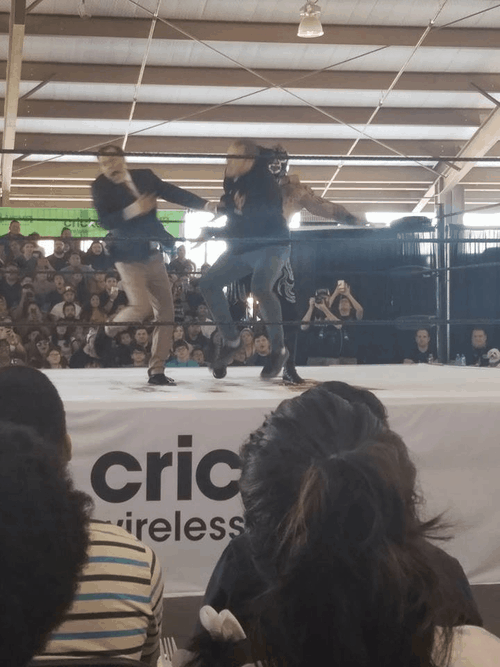 Before the show officially started, Vampiro came out to inform us that the main event was going to be Pentagon Dark vs Mil Muertes in a Devil’s Day Death Match. He was interrupted by his psychiatrist, who attempted to remove him from the ring. This led to Mil Muertes blind siding Vampiro from the back and taking him out. 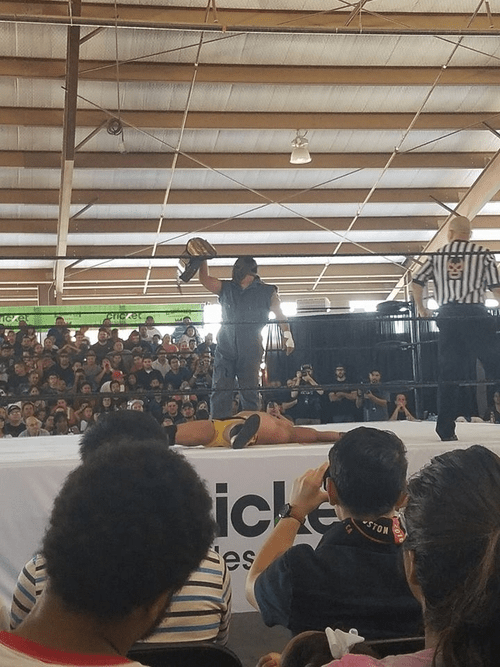 Match 1: Matanza vs Cage for the Lucha Underground Heavyweight Title

This was my favorite bout of the night. My mouth dropped due to Matanza’s power, and the insane agility of Cage. Brock needs to take lessons from Matanza, cause he brought the real Suplex City to Houston. He was tossing Cage around like a rag doll. Cage, on the other hand, was obviously watching WWE earlier in the day because he did the pedigree and the F5 on Matanza. Also, the crowd went nuts when he hit 619. 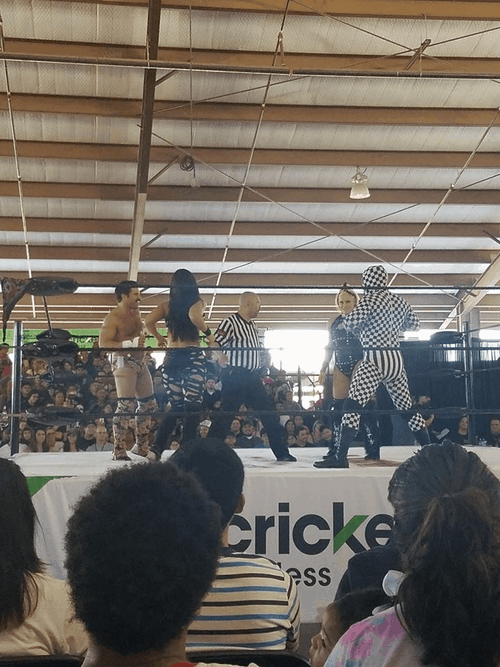 Match 2: Saltador vs Ivelisse vs Joey Ryan vs Taya

Although this was a spot fest with some botches here and there, it was still very enjoyable. Saltador, Paul London’s cohort, was the clear standout. If I didn’t know any better, I would think 1996 Goldust was underneath that black and white checkered outfit. The crowd was in awe of his his strange movements and mannerisms. 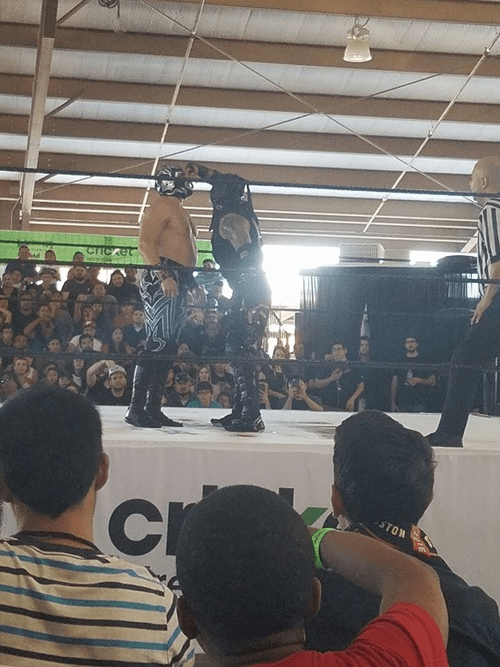 Winner: Pentagon Dark thanks to Vampiro

Pentagon Dark came out to the biggest ovation of the night. This was a hard hitting bout consisting of chairs, stop signs, and kendo sticks. Although no blood was shed, both were definitely swinging for the fences trying to knock each other’s heads off. Near the end, Vampiro got his revenge, and helped Pentagon get the pin. After the match, Vampiro and Pentagon did the Cero Miedo hand gesture, and played to the crowd.

Overall Thoughts: I would have paid to see this event. This was one of the best live wrestling events I have ever been to. I cannot wait for them to come back.