I’ll admit that I tend to favor the X games over the original Mega Man franchise. Honestly, part of that is age, I was just too young when the Mega Man games came out. Another part of that is they are tough games. Especially the first two games. I also never owned a Nintendo Entertainment System as a kid. I did own a Super Nintendo Entertainment System though. So I got into the Mega Man X franchise.

The basic premise of the Mega Man X franchise is that it’s at least 100 years after the Mega Man series. Dr. Light is dead. But before his demise, he made one last robot named X. X is found in hibernation by scientists who use him as the basis of a whole new generation of robots called Relploids. Some of these Reploids turn bad and become Maverick. X (alongside Zero) are a force of Maverick Hunters who take them out. Let’s see how this package treats each game. 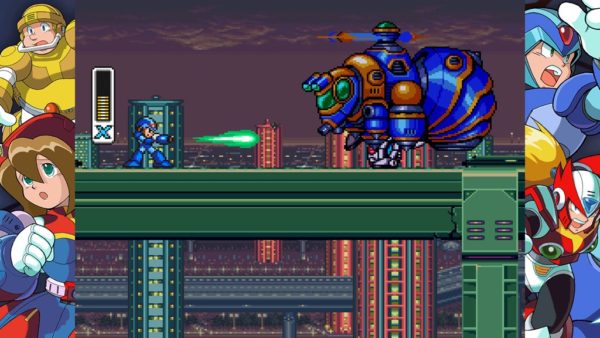 The original holds up shocking well. Despite it being almost 25 years after it came out. I forgot that you don’t start off with the dash move, you pick it up as an upgrade in the ice stage. MMX introduces most of the basic framework of the X series as well. This includes X, Zero, Vile, Sigma, upgrade capsules, refillable sub (energy) tanks, and so on. It also features a hidden Hadouken attack that can one-hit kill anything but has some requirements to actually get it. As a whole, MMX is still a great game. 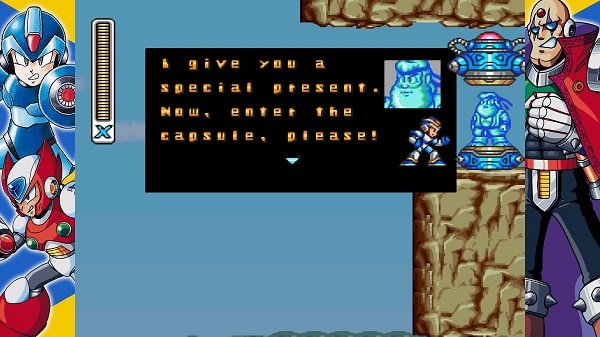 More of the same, just with slightly upgraded mechanics. There’s a new gang of evil robots called the X-Hunters who are trying to stop you and recover the body parts of Zero after he sacrificed himself for you in the prior game. This game introduces vehicle stages. As well as branching paths for boss fights. Along with different endings for the game too. Also, if you meet certain conditions, you can get the Shoryuken, which is pretty great. 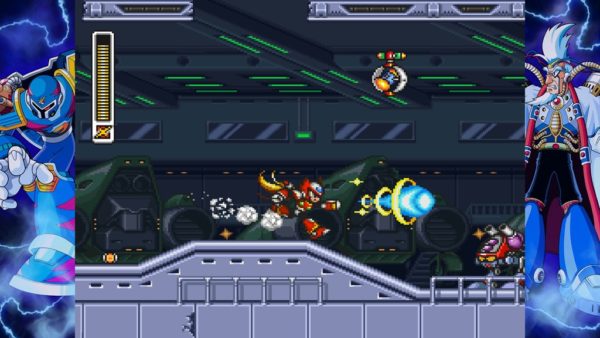 I’m noticing a theme here of making these games just slightly more expansive. In MMX 3 you gain the option of playing Zero during levels. He is initially a stronger character than X. If Zero dies in a stage though, he gets locked out for the rest of the game. Aside from that, there are different types of ride armors for use that are required to unlock upgrades and new enhancement chips. You can only have one chip active at a time, but each of them has very useful purposes. For example, refilling your health slowly or letting you do two air dashes. Sadly, there aren’t any Street Fighter moves in this game.

Honestly, Mega Man X4 is probably my favorite game in the entire Mega Man franchise. It has some great graphics, interesting secrets, and one of the best soundtracks ever. To start with, you can play as both X or Zero from the start. Each character has their own slightly different storyline too. Also, as compared to X3, Zero now has his own drastically different moveset, which focuses entirely on his Z-Saber and close-range attacks. Ride armors are de-emphasized and enhancement chips are gone. However, there are still upgrades for X that increase his abilities.

The bosses also have a touch more personality in this game. The art style is upgraded from the SNES-era. Plus, anime-FMV sequences flesh out the story too. The only downside is they reduced the number of sub-tanks from four (in the previous games) to two, which isn’t fun. To me though, Mega Man X4 is the definitive Mega Man X game.

Rinse and repeat only now with a slightly “Meh” quality to it. You can switch between X and Zero at any time as you play. The big addition here is that you can get infected with a new virus that damages X but gives Zero some temporary boosts. There are more armors for you to unlock, but you can’t mix and match them. So, you have to collect all the parts for them to become useful. There are also multiple endings in the game. For example, whether or not Zero turns Maverick or who actually finishes Sigma off. 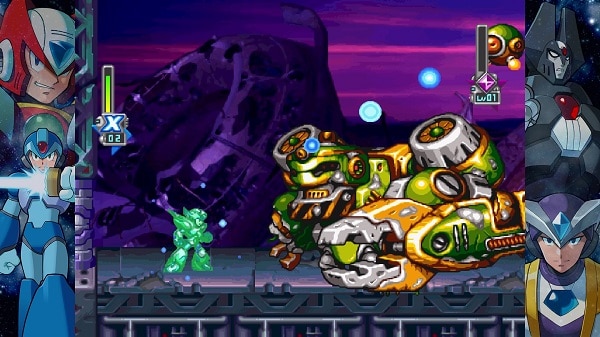 To its credit, X6 does have an interesting armor system. You can now mix and match different armor parts. So, if you like the boots upgrade from the Blade Armor, and the X-Buster upgrade from the Shadow Armor, you can use them. There is also an actual focus now on trying to rescue innocent Reploids and not letting them go Maverick. You don’t have Zero at the start but have to defeat an evil version of him first in order to unlock him. X6 isn’t necessarily a bad game, but it is the X series when it’s just spinning its wheels. 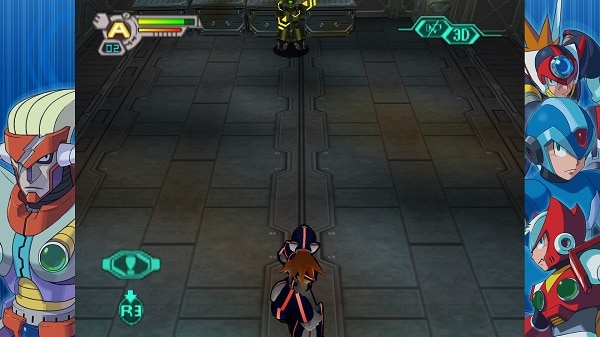 This is where the X series really went off the rails. In the transition from the PlayStation 1 to the PlayStation 2, Capcom decided to throw in a lot of new mechanics that well, suck. First is that you primarily control Zero and Axl, a new character, and not X. Axl is different from both characters in that he can shoot diagonally. He can also hover in mid-air (without the use of an upgrade part). He also has a “copy shot” ability too. This lets him transform into certain robots if killed with a different attack. Letting you use enemy robots abilities against other enemy robots. As well as accessing different areas and such. 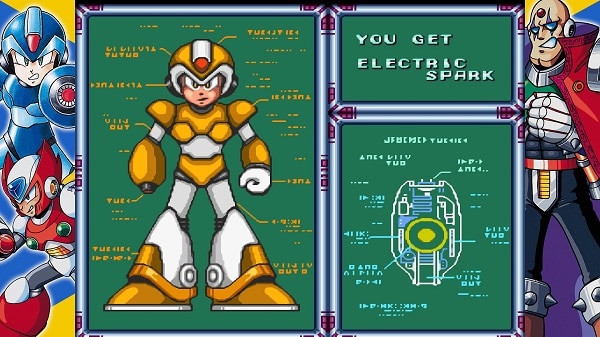 The Rescue Reploids mechanic comes back with a vengeance in this game. You have to rescue 64 Reploids (out of 128) to actually unlock X in play. That is insane. It doesn’t say “Mega Man Axl” on the box, it says Mega Man X. The fact you can’t play as the title character of the game, for a majority of it, is crazy. Also, Mega Man X7 is the first (and only) X game that had a foray into the 3D realm. There are both 2D (side-scrolling) and 3D sections, and neither feels good. Although, the 3D one feels markedly worse. It plays a lot like Contra III: The Alien Wars on the SNES. This is, without a doubt, the worst game in this entire package. 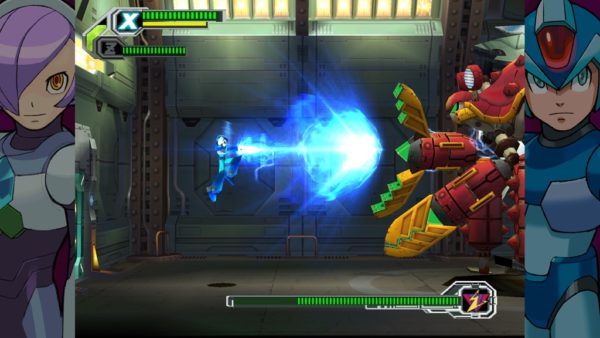 Mega Man X8 is a bit of a return to form for the X franchise. Instead of being strictly 2D or some ill-fated 3D, X8 is a 2.5D game. What this means is that most of a level is on a 2D plane, but it is rendered in 3D. So, there are times when one of the three playable characters (X, Zero or Axl) can go into the foreground or background to access hidden places, or just to continue on with the level. While there are three playable characters, you can only pick two to play a stage with. You can swap between them with a press of a button or unleash a super attack with both characters when a meter is full. 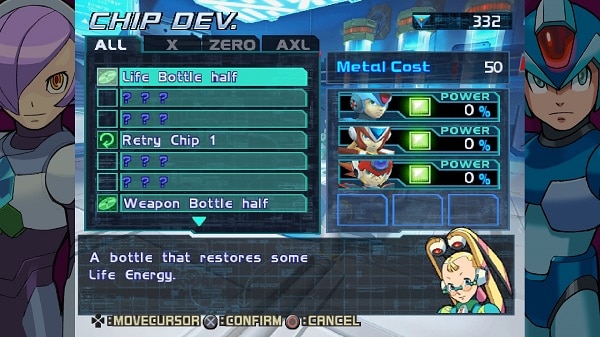 There are three navigators that tell you secrets about the levels or analyze boss weaknesses. In X8, there is a much greater emphasis on collecting bits for you to buy new items for your characters. While also collecting “Rare metals” for you to unlock new weapons and abilities for your characters. I actually have a fondness for X8. It’s not quite a traditional Mega Man X game, but it is unique and I like the overall feel of it.

Also Included, And Not Included 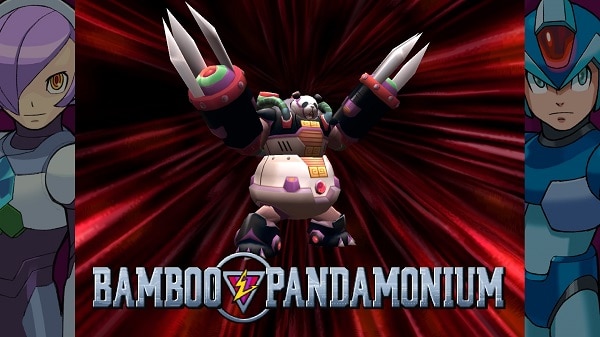 So, with this Legacy Collection package, you get the first eight Mega Man X games, as well as the Japanese versions of them too. You can easily toggle between them with a button press. Starting with X4, the games have some really dodgy English voice acting. So this gives you the ability to play as the Japanese Rockman X4 instead.

There is one big omission in this package and that is Mega Man X: Command Mission isn’t included. Command Mission came out around the same time as X8. It is a Japanese Role-Playing Game set in the world of Mega Man X. You have a party of X, Zero, and Axl, alongside some other more popular JRPG character tropes. your mission is trying to stop a rebellion within the city. I’m not going to claim it’s the greatest JRPG in the world. But it did have some nifty features like the turn indicator and how you create new items for your party. I imagine its exclusion here is based on size, after all, it is another PS2 game. But still, it’s a missing game that should have been here. 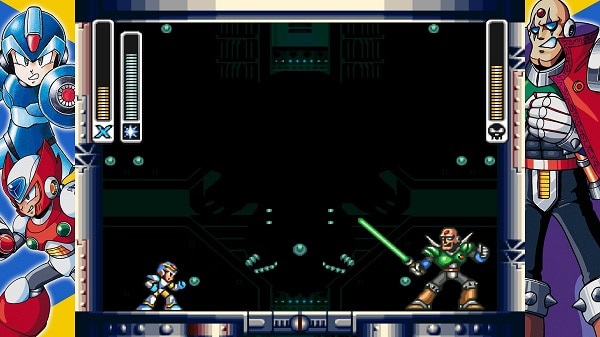 Aside from that though, you get the soundtracks for each game. Galleries of each game, along with galleries of the merchandise for each game. Plus, game trailers and each version of the collection includes “The Day of Σ” (The Day of Sigma), which was an animated prequel taking place just before Mega Man X. 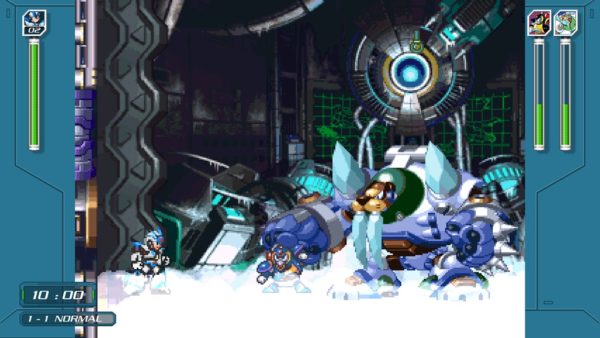 X Challenge is a wholly unique survival mode. It sets you as X going up a ladder system where you face two Mavericks at the same time. You are able to select three different sub-weapons at the start and the goal is to make it up the ladder and get a good leaderboard score. I’m not a huge fan of this survival mode. Some stages are easy to take on but others have robots that are diametrically opposed to one another’s weapons. Also, you can’t change your sub-weapons during rounds. Instead, you’re stuck with whatever you picked at the start, so you’ll likely run into a pair of bosses that aren’t weak to anything you have.

One Better Than Two

Overall Score: 8.0 Out of 10 This package has at least three of my favorite Mega Man games in it. Along with four others that are perfectly playable. Only one game in this collection is a travesty and it can be safely ignored. I do wish Command Mission and the save state system from the previous Mega Man collection had been included. Overall, Mega Man X Legacy Collection 1 + 2 is a good nostalgia trip for MMX fans and should be played by anyone who enjoys good platforming/shooting action.

This game was reviewed using a digital code provided by Capcom