Unless you are lucky enough to only have worked at your dream job all your life, chances are you’ve felt the grind and drudgery of working at a job you don’t necessarily enjoy. Going through each day with a similar routine and doing mundane tasks out of outright necessity without having much time for recreational activities or just outside human interaction. Krillbite‘s Mosaic is essentially conveying that same feeling in its art style and story. While also using light puzzle-solving gameplay elements to push some of its narrative as well. As is the case with these types of games, how much one identifies with its journey may directly determine your drive to keep playing it to completion. 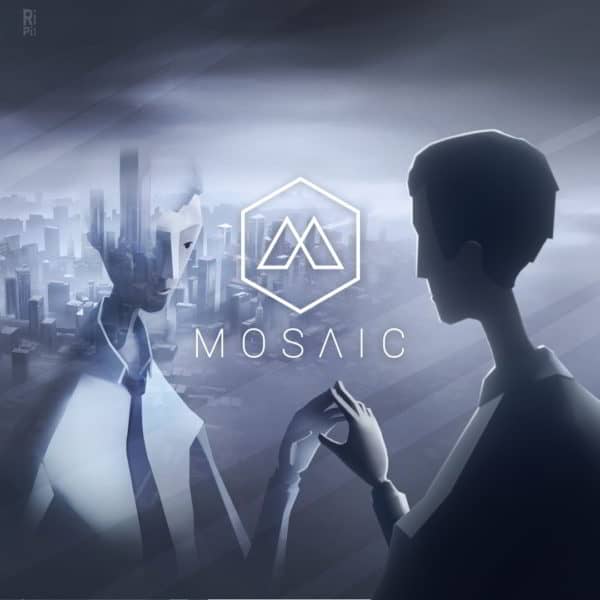 A Nobody In the Big Grey World 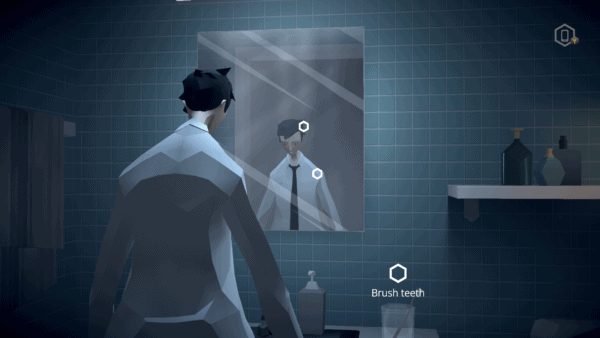 The narrative of Mosaic places you in the shoes of a regular guy who basically does the same things every day, as presumptively before players began controlling this human he was just getting up, going to work, and back home again. Taking place during a period of five days, you make small choices like deciding whether or not to tidy his hair or brush his teeth in the bathroom to turning on the television or peeking in the refrigerator. There are also some bigger choices that you make outside the apartment. But the morning routine is where you start seeing some of the small nuances of the story.

Performing these tasks over and over helps drive home that slogging feeling. Each day things such as clothes and mail continue to pile up, as the character doesn’t even bother to change before going to bed or look at the mountain of overdue bills accumulating on the table. Not to mention, the ones hiding in the mailbox too.

Clicking to Distract Your Mind 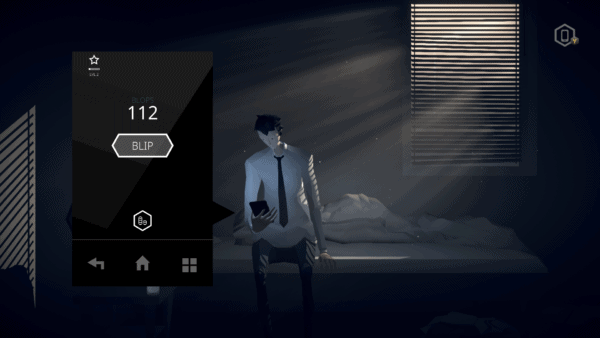 Before heading out into the opaque and solemn world he inhabits, players can grab his phone as the one solace. Although reading work messages telling you how being late a few more times will leave you unemployed. And looking at the increasingly overdue bank account further reinforces his sad state. At least there’s the clicking game Blip Blop to completely distract you on the journey.

Blip Blop is a simple clicker game that sees you pressing one button over and over to get points. Pressing the button faster helps increase the speed of said blips and blops until it goes crazy and sparks literally start flying. Blip Blop also serves as the only way to get achievements in the game, so playing it also has other advantages.

Getting Lost is Beautiful and Colorful 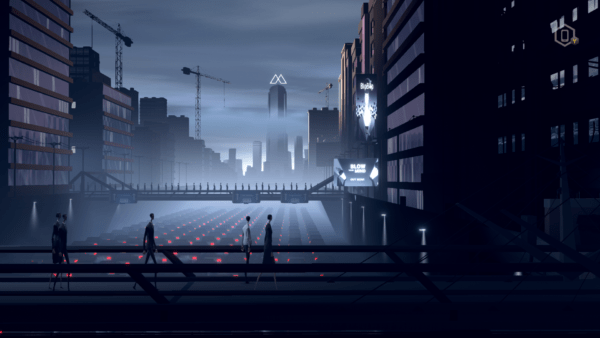 Outside the apartment, the world is even bleaker. Full of people just speedingly going to work without even a second thought to the world around them. These moments are perhaps the game at its finest. Much of the scenery is drawn in a dark and drab artistic style. However, the cinematic camera brings out some marvelous vistas that paint a beautiful picture of its gloomy world. Making me want to continually find its hidden corners and branching routes to take pictures of what I found.

Wandering around also leads to discovering colorful distractions. These take the form of butterflies, with one striking scene, in particular, having you control the butterfly only to watch it get crushed, musicians, or simple daydreams. Finding these slowly brings uplifting feelings to the character and are great visuals that serve as small glimpses into what his life could be if he just gets through the darkness. While he also passes advertisements that encourage taking anything that keeps you in the working mode. 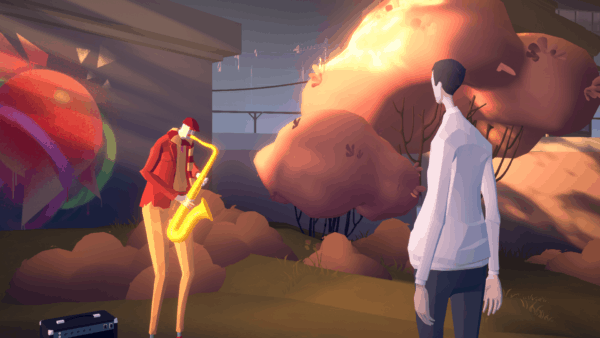 As the days pass, more snapshots occur of the actual commute, so the story narrows its focus as it draws closer to its conclusion. Thankfully, its sort of a good thing because the character lumbers around pretty heavily. Although it obviously symbolizes his lethargy and emotional weight, it does make walking around a bit cumbersome. Especially, in the final areas where you may start to feel anxious about finishing the game. I wouldn’t call this a hindrance perse, but more of an annoyance at the wrong time.

Working on Those Hexagons 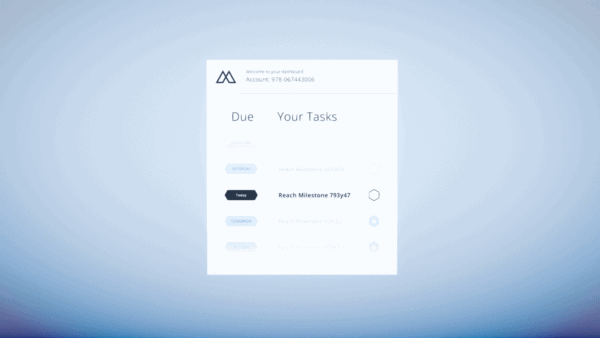 Once your character arrives at the office and sits at his desk, the game within the game begins. Set against a bland white background are black modules where you need to simply create enough loopholes and resources to reach the milestone. Initially, you aren’t given much direction on what to do which can make the first job a bit difficult, but once you finish the first puzzle, you’ll understand how to accomplish the subsequent puzzles. The milestone is shown at the beginning and then you figure out the rest. Essentially, you build resources, which are represented as hexagons and white diodes. The white diodes fill up hexagons and you continue building on top and across the screen. You’ll also need to continue to keep opening up more of the black modules so that you can make more resources.

Continuing on the theme, if you build too many resources than necessary, your bosses send out a memo saying that you are wasting resources and to “just focus on reaching the milestone.” Of course, there are also different colored viruses that attack the system. Forcing you to spend even more resources in trapping them so you can continue towards the goal. Although the puzzles aren’t difficult, the freedom it gives you in reaching the milestone is another opportunity you have to deviate from the norm.

I found myself purposely creating more modules and more resources in defiance on purpose. Simply because I wanted to see more messages pop up from the big corporation. In gaming terms, more modules mean more diodes, which means faster upgrades. Helping you finish puzzles much faster since the further you build, the further the diodes must travel. So although the bosses may feel it unnecessary, stick it to them by using as many resources as possible. 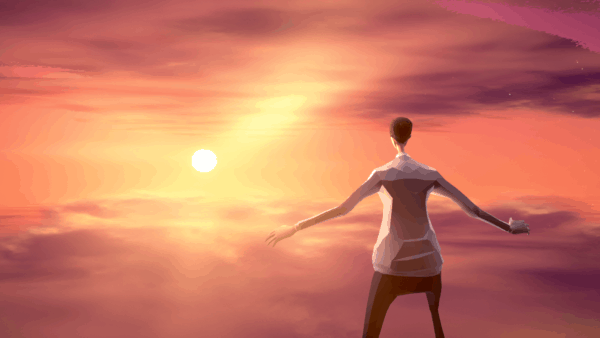 Mosaic struck a chord with me because I’ve been in this character’s spot several times. Where I didn’t really want to be working at this job, but out of necessity, fear, or just simply because I couldn’t make a change in that time period. Having to just go to work, go through the motions, and go to bed. Being depressed, but at the same time smiling because it was the only way to get through the day. However, once I did make a change, literally, my life lit up and those days gave me so much more joy. Those little moments in-between the grind can be what keeps the glimmer of hope alive. Mosaic certainly conveys that in coloring its small opportunities for exploration.

There are also some touches on how smartphones positively and negatively impact our lives. I described the positive impact earlier, but there’s certainly a message here about things like dating apps, social media, and constant streams of information that can make us comfortable with not having many physical human interactions. 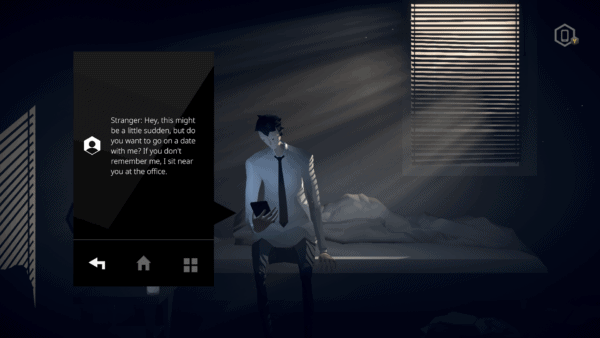 Not to mention, the numerous stabs at an increasingly corporate culture that cares less about its employees and more about meeting daily, weekly, and monthly goals. Even at the expense of your mental stability or physical well-being, which may force you to go for the advertisements plastered all over billboards in the town.

Mosaic certainly pushes narrative over everything else. But it does so with clear intentions in its thematic choices and in its art style. Overall, I enjoyed my three hours or so with Mosaic. Especially because its story hit home for me. While at the same time making me happy for its character’s conclusion. Its puzzle fueled job and clicking game Blip Blop also provided nice deviations that make this more than just a Walking Simulator. This may not wind-up as highly acclaimed as their previous title Among the Sleep, but it is still another good game from Krillbite Studios.