10tons Entertainment wanted to know what would happen if you combined Hotline Miami, Rogue Legacy and System Shock. The end result is Neon Chrome, an entertaining top down, twin stick shooter set in a cyberpunk world. Set inside an arcology. The player is tasked to stop the Overseer, who sends waves of minions to destroy you at every turn. 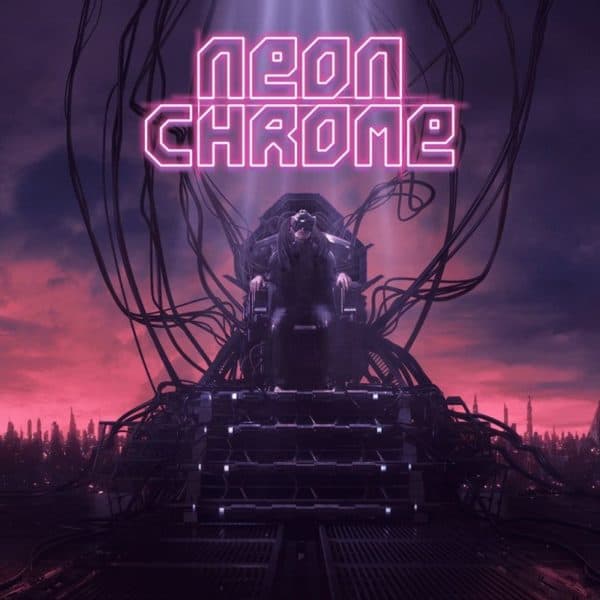 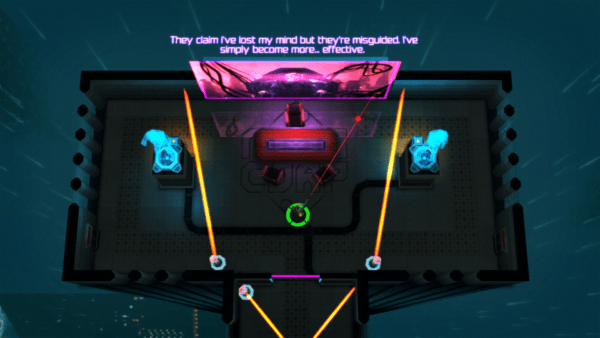 In most rogue-like games, the story is not the main focus.  Neon Chrome follows suit.  The Overseer relates the story by talking to you on the journey through several floors. However, most of the time you find yourself tuning him out.  The backstory they add to the simple formula of “stop the bad overlord” just doesn’t have much substance to it. 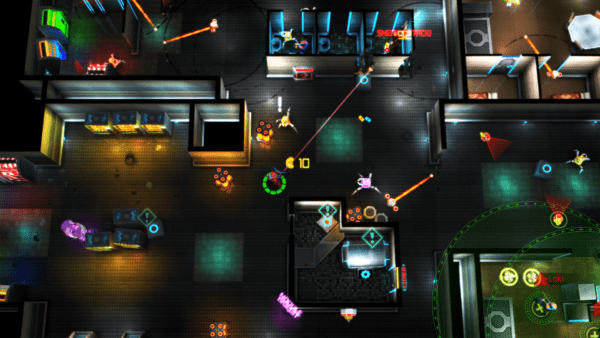 The focus is all on the gameplay, which challenges with its difficulty. Neon Chrome asks the player to learn on the fly.  It rewards them for failed attempts, by giving them the ability to improve the next character.  The entire game revolves around you working your way up the building, floor by floor.  Battling through waves of soldiers, machines and strange alien creatures on your way.  Your main objective, is to find the elevator hidden on each floor to proceed. Basically, this is what you do. Reach the elevator and move on to the next level, rinse and repeat.  There are a few exceptions, where floors ask you to destroy a number of objects before continuing.

However,  These floors don’t add anything different to the gameplay. Instead, they just force you to wander the entire floor. There are Some floors that have a special purple elevator, instead of the normal yellow.  These elevators take you to special rooms filled with secret items. Some even contain different trials to pass through as well.  In the grand scheme, these are completely skippable. Especially, if you are working on a run to make the next checkpoint. But are great on runs needed to build up cash.

The Power of Money 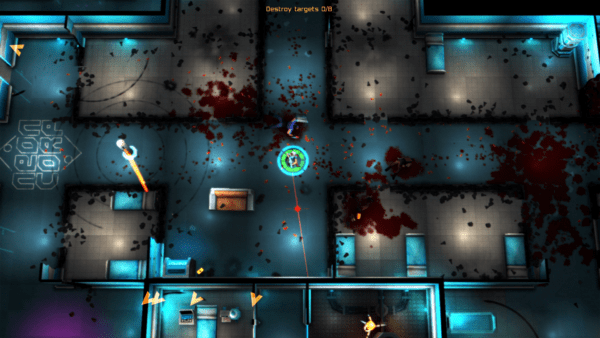 Cash is the main source of building your character.  When you fail your run, you are brought back to the main hub.  Here you can deposit the cash in different terminals that increase the stats of the next soldier.  You can spend your money to add health. Strengthen your attack, or give yourself more ability slots.  Those slots are filled through playing, by abilities you find in certain chests on the floors.  These ability nodes can do anything from giving you a quick increase in funds, or even boost melee attacks.  Along with money and abilities, you can also find stronger weapons, or you can choose to level up each weapon type instead. This not only gives you more than enough reasons to take your time sweeping each floor, but also provides some strategy to the game too.

Is There Enough Variety? 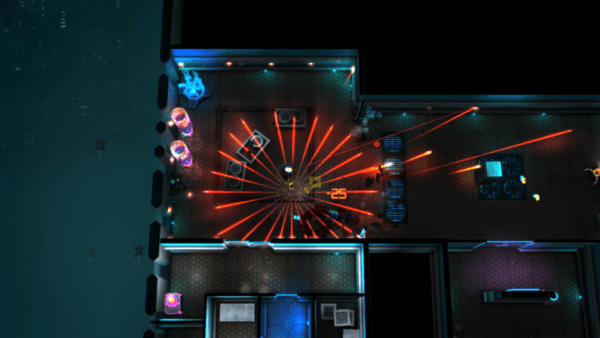 As expected with rogue-likes, each playthrough changes all of the floors, making each attempt a new experience.  To add to this, you get to pick between three character types, chosen at random. The starting weapon determines the character class, and each character also has a special weapon and special attributes as well. Focusing on said special attribute is the main focus, as you can pick up other weapons as you play.  Although the levels change on each run, you are stuck in one building, meaning the environment never really changes.  The layout might flip around, but you are still looking at the same style rooms and objects, on each floor, every single time.  This repetitiveness hurts the game. Especially since it is designed to be played multiple times. 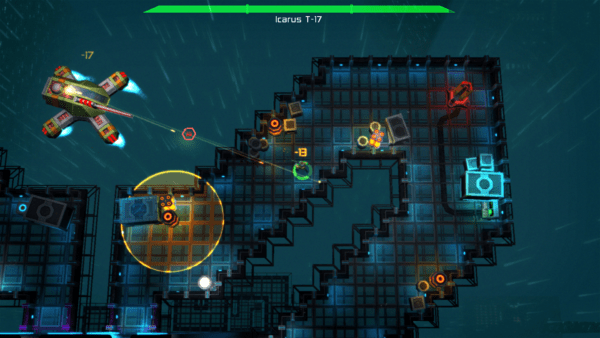 Neon Chrome is split into five sections, with each section separated by a boss battle.  There are two types of bosses, making up four boss battles in total.  A helicopter that flies on the outside of the building, and a centipede robot that runs around the screen dropping landmines. Neither are all that memorable, but do add enough to make them feel like special landmarks.  These landmarks also count as checkpoints for future playthroughs. Since, once you defeat a boss, you are allowed to start a run from the floor that follows the boss encounter.  Thankfully, the fifth and final section change things up and really tests your skills, as it forces you to really grind and level up your soldiers to get through it.

As seen above, this game came out previously on other, more well owned systems. However, the game is perhaps a better fit on the Playstation Vita. Reviews on those other systems, complain that the graphics look dated on a television or computer screen. I didn’t really notice those issues playing on the Vita.  The colors contrast each other nicely, and the explosions really pop.  It also controls very well on Vita too. Creating a floaty feeling for your character as they maneuver the floors.

I should advise players, if you don’t play many shooters on the Vita, the analog sticks can take some time to figure out, mainly due to the fact, that they don’t feel like the controllers on the bigger consoles do.  Once you get the controls down though, the game feels great and you never feel like a death was out of your control.

Fits perfectly on a handheld

Lack of a compelling story

Overall Thoughts: 7.5 out of 10 I recommend Neon Chrome to any Vita owner that enjoys a lot of action.  The system might be dying a slow painful death, but this is a nice addition to the catalog. The easy pick up and play feel works much better on the Vita as well. Although, the story is lacking, and the repetitive environment can feel stale, this was still a very fun game to play.

for the sake of transparency: a digital code was given by the publisher for review purposes.