Trinity/Naomi is in Vancouver, British Columbia to film The Marine 5. THE SOCIAL OUTCASTS ARE THERE AS WELL!  Heath Slater steals Trinity’s phone, and she’s worried about him seeing Jimmy Uso nude.

Brie Bella and Daniel Bryan go visit Nikki Bella. However, this time they are smart enough to get their own place. They play ping pong before taking a “How Smart Is Your Dog?” test. It’s Josie vs. Winston in a battle of wits. Josie wins round one, and then Nikki pulls Winston out of the competition. I bet Winston got a participation trophy.

Lana and Renee Young go line dancing. Rusev tries his hands, but he’s basically in the club doing the same ol two step. Then he tries his hand at a southern accent and it’s far better than Lana’s Russian accent. Now they want to do a Nashville style wedding. So, they are having three weddings I guess.

Natalya is excited about her career because it’s going well. I have no idea what month they are at. But I believe her.

The Miz and Maryse are also on the set of Marine 5. Maryse visits Trinity in her trailer. Trinity has 20 sticky notes to remind her of things to do. I hope one says, “It’s a WWE Film” with a hint of irony.

Nikki, Brie, and Bryan discuss the Bella twins taking an IQ test. Bryan questions their testicular fortitude and doesn’t believe either will take an IQ test. 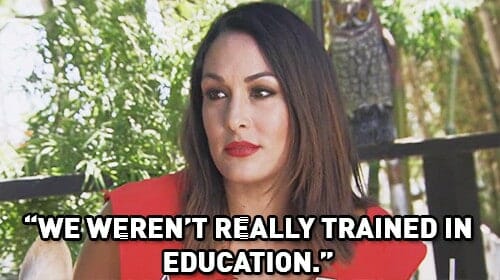 Nattie gets a phone call from her mom. Jenny, Nattie’s sister, saw a bunch of text messages and then ran away. The fuck? Cesaro comes to comfort Nattie. He comforts her by saying, “she can make her own decisions.” Why isn’t Big E clued in on this? That’s a call back.

One scene later, Jenny is in the car with Nattie and everything is fine. The fuck? Nattie wants to find Jenny a hobby so she can harness her crazy.

Lana talks to Renee about her Nashville wedding. Renee is confused by Lana wanting to do everything in a theme. Mark Carano says, “you’re Russian, he’s Bulgarian, and you want a Nashville wedding.” This is the world of pro wrestling in a nutshell.

Nattie and Jenny decide that Jenny needs to host a cooking class. So they go around and put flyers on stop signs to promote this cooking class. That’s not how the world works anymore.

Bryan gives Nikki and Brie a practice IQ test. They both do badly. Now they’re going to take a real IQ test. Brie is nervous because Nikki is a sore winner and if Nikki wins, she’ll never hear the end of it. 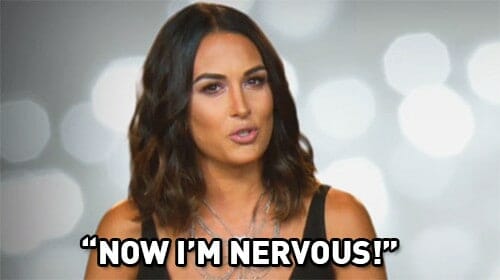 Nattie invites Titus O’Neil to Jenny’s cooking class. Titus wants $100 to show up. Gotta protect that brand. Nattie pays in 1’s and Titus wonders if she has a side job. Titus tries to get Dolph Ziggler paid, but Dolph isn’t interested in cooking.

Nikki and Brie finish their IQ test. They discuss their answers, which I’m pretty sure is an IQ test no-no.

Maryse and Trinity go hang out away from the movie set. They head to an arial gym, and Trinity is afraid of heights. She wastes no time getting on the trapeze bar and looks pretty comfortable doing it. Well, that was harmless.

COOKING WITH Jenny! BIG E DOES SHOW UP! As does Titus and Fandango. Maybe this will double as a dancing class. Jenny wets herself when she sees Big E, which is a natural reaction. Nattie divides them into two groups. The black group and the white group. Not intentionally. Titus calls her out on this. Cooking class starts and everything goes well. There has got to be a swerve at some point.

Rusev and Lana head to a farm for a photoshoot. RUSEV DOES THE SHAWN MICHAELS POSE IN OVERALLS AND THIS SHOW HAS PEAKED!

Then, at the cooking class, someone reveals that everyone was paid to be there. I bet they were paid double to say that out loud and start the drama. Jenny is embarrassed. Nattie says that she did it. For The Jenny. She did it. For her sister. 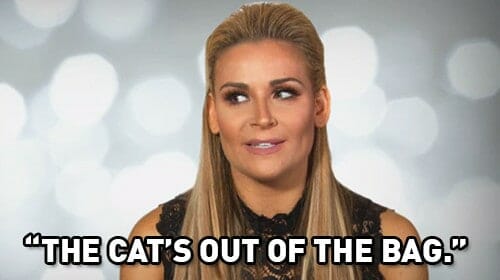 Rusev gives Lana a giant picture of their wedding invitation. This man is making us all look bad in so many ways.

After that, Bryan has the IQ test scores. Brie and Nikki have decided that they don’t want to know the scores because they don’t want to strain their relationship. Brie takes them and acts like she’s going to throw them away, but doesn’t. She then opens them, and Nikki catches her. Couldn’t you wait until she left? They open the scores and…..NIKKI IS SMARTER! 113-99. Poor Brie. The IQ test people are going to watch this show and question their own test after seeing that Nikki scored higher.

Next, Jenny yells at Nattie. “Without you, I am nothing!” and Nattie notes that the whole bottle of wine is gone. Oh, so she has alcohol issues?

Those issues aren’t important though because the show cuts back to Marine 5. Trinity overcoming her fear of WWE Films is much bigger than potential alcohol issues. This scene lasts two seconds.

Back to Jenny and Nattie. Jenny doesn’t want to let Nattie down. Nattie says, “you never let me down.” Jenny reveals that Big E was hitting her and that’s the end of the phone call. So, she doesn’t have alcohol issues? What was the wine comment about? Nattie realizes she needs to give up control. Wasn’t this already a storyline on a previous season?

On Marine 5, Trinity films her scene. SHE WALKS WITH A SCOWL! And…that’s it. That’s the end of the episode. BUY MARINE 5 ON DVD TO SEE TRINITY WALK WITH CONFIDENCE!