Portal Knights from Keen Games brings a little role-playing to a sandbox game. Using Minecraft building ideas, procedurally generated islands, cute visuals and Action RPG combat. Portal Knights gives players of all ages something to enjoy in one package. The game has been available for over a year in early access on PC. Now, it makes its way to home console, and later to Nintendo Switch as well. 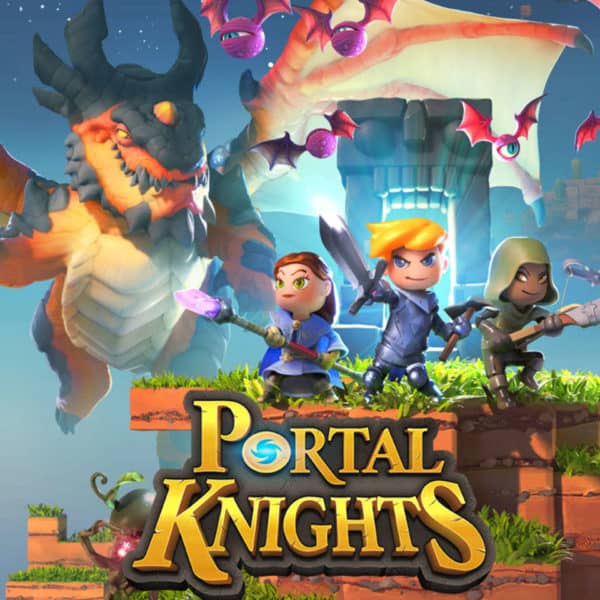 The Quest of a Squire 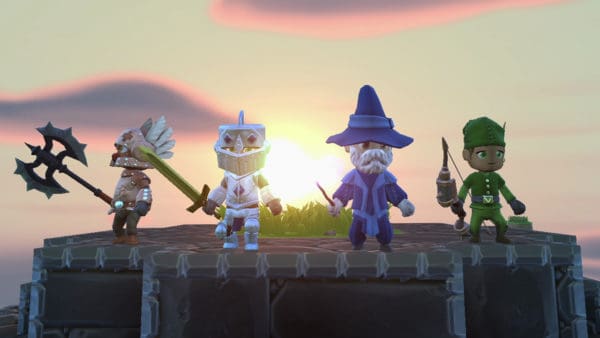 Portal Knights begins with having the player customize a character based on three RPG type classes. There’s the Ranger for attacking from farther away. The Mage, which uses magic. Finally, the warrior for up close melee combat. After players are finished customizing their characters, which surprisingly has a great number of options. Then, you are dropped in the first island of the game. Here, you are asked to create a base, learn to farm and craft some items. Basically, it’s a tutorial. Players can test out controls, have a feel for the landscape, as well understand how the game works. You also can venture out on simple quests as well. 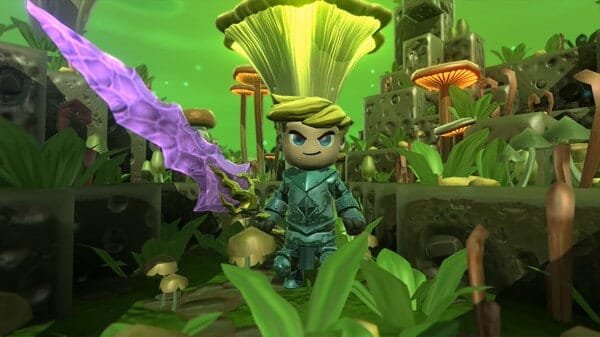 These quests create interactions with NPC characters. Unlike in other RPG’s, these quests serve their simple purpose, and nothing more. Build a certain item for a character. Find this thing they need, or defeat an enemy, who then drops a certain item. There’s no overarching story or set number of quests to move anything along. The quests do help in the leveling up of characters, but you can also just defeat enemies, without doing them. It’s this freedom that Portal Knights gains from Minecraft or Garry’s Mod. But the other RPG aspects, are what actually move the game forward.

The Experience of Island Hopping 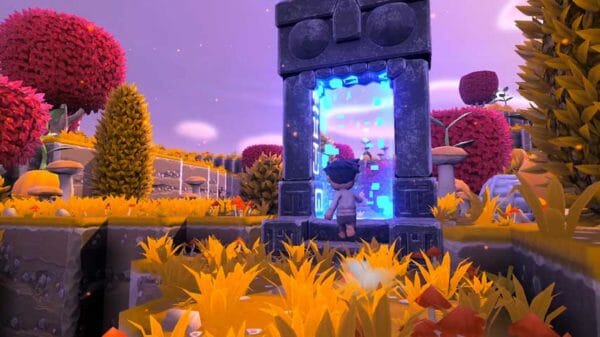 As mentioned previously, Portal Knights is built around islands. These islands are procedurally generated, so each time you go into one, even if it has the same biome, it’s going to look different. You get around to other islands by finding blue shards or by receiving them as enemy drops. You use these shards to create blue portal blocks, which allow players to venture into other islands. The more you progress in the game, the more block colors there are. These blocks match the color of the island. Each island is built around an elemental biome. So, you may see a desert area. A lush green forest. An island full of ice. These also carry with them their own set of enemies, who grow in strength with each new island you visit. 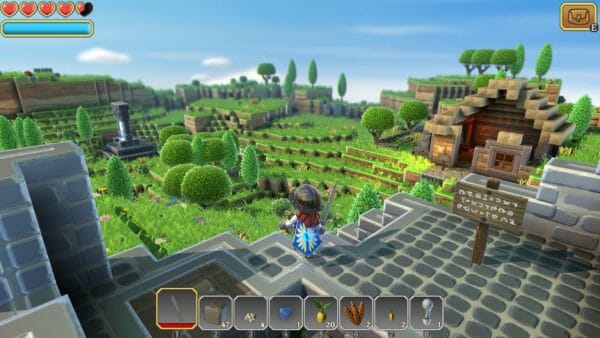 This is where having resources is important. Especially because some islands have materials that are only specific to their island. These resources can offer a better chance in fighting enemies, or the three major bosses. For the most part, if you continue to level up, creating new weapons isn’t really a must. However, updating armor and other items is necessary to keep pace with the strong enemies. Each character has six areas you can upgrade. Although out of the six, aside from health, there are only a few of these that matter to one class. This is where it caters a bit more to younger gamers. Making it easy to become stronger, without having to get into too many specifics. 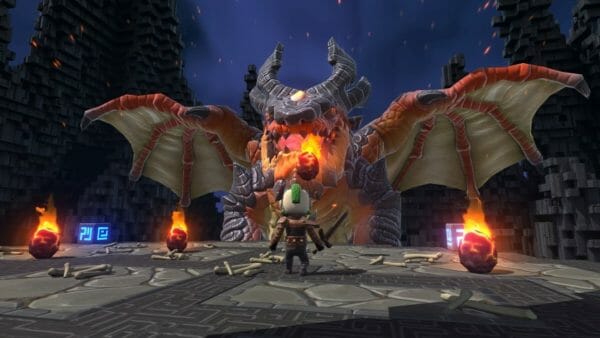 Battles themselves follow the action formula. Hack and Slash enemies until they die. Shoot arrows or magic from long range. While also making sure there’s plenty of items for healing around. Players also see their jump button turn into a roll, which makes it easier to dodge blows. Deciding when to attack or dodge is the crux of the system. Obviously, stronger enemies require you to be a little more nimble. While you can go on an all out blitz against weaker enemies. 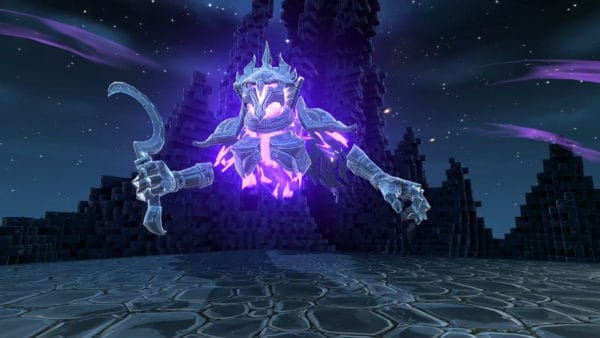 However, this isn’t to say that the game ever really gets super easy. Especially when battling the big bosses, who are difficult enough that you may need a friend to help you out. Either bringing someone over from the same system, or up to three others through open online play. They can enter your game and join you on the island hopping quest. These people can also help procure items, battle enemies and craft objects. Made even better that you lose nothing in death. By paying a small coin fee, players respawn at the gate of their current island, and all of their other things are intact. Sadly, I wish there were more bosses to level out play a bit more, once you have friends around. 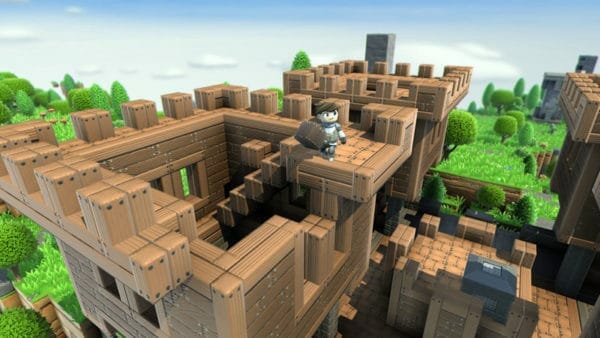 I should stress that Portal Knights crafting elements are deep, if you want to go down that road. However, most of your items can be found by defeating enemies. In fact, there are certain portal block colors you might need that only come from enemy drops. Although rare, you may fight enemies for a while trying to get a certain block color to create that portal. You can imagine how frustrating that is. But it is nice, players can build so many different things in Portal Knights.

Although not necessary, I’d recommend building a small base after running through a certain amount of islands, as the game does not provide any shelters in each level. Also, be aware that you can only take things with you, that are in your backpack. For example, if players want to take a crafting table, the table must be in their backpack, in order for it to appear on the next island.

Luckily, seeds are easily transported and harvested. Some do require their natural habitat to grow, but for the most part, players can grow trees, fruits, cotton, and other things to get the resources they need. This is especially handy, if the next island is very different from the previous one. This is certainly true for a desert or tundra island. These environments are scarce, and have very limited resources. So, get anything you can from these areas.

A fun sandbox game for all ages.

Friends can join the game, as long as you have it open online.

Sometimes, items, resources, and portal blocks can take a long time to obtain.

Had a few issues with bugs, causing me to restart the game.

Needs more bosses, and less of the usual enemies

Overall Thoughts: 8.0 Out of 10 Portal Knights cutesy graphics appeal to the younger crowd, but it’s focus on detail makes it a good game for adults too. Those graphics also are another reason Portal Knights stands out among the games it takes from. Although it lacks an overarching story and is light in battle depth, Portal Knights makes up for that with it’s variety of enemies and impressive crafting system. It’s a game that players can also take their time with and enjoy as well. In addition, you can complete the whole game with friends too. Ultimately, Portal Knights takes ideas from other games, honors them, and also does enough to carve out it’s own place in the sandbox genre.

For the sake of transparency, the publisher (505 Games) provided a digital code for review purposes.