Project CARS 3 is a bit of an odd beast.  While I didn’t play the second one in the series, I remember the first game was an extremely serious simulation racing game that let you start off in go-karts to get used to the driving model and how the career mode shakes out. Project CARS 3 doesn’t have this.  In fact, it’s almost a game that is trying to split the difference between other racing games and winds up bland in all disciplines as a result. 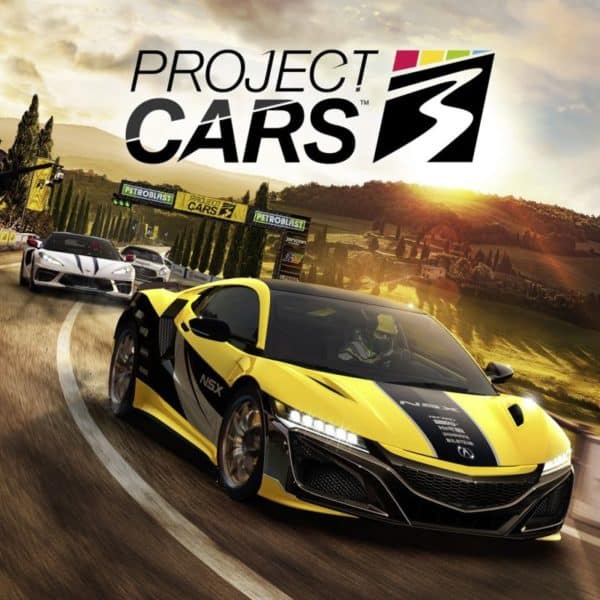 I want to start off by saying that fundamentally Project CARS 3 is a fine game.  The driving is serviceable, the game looks good, the soundtrack is really good, and it has a mostly understandable career mode.  However, the game is just missing any spark or hint of creativity or identity.  Say what you want about the first game, but it knew it wanted to be a simulation-heavy racer, and it achieved that goal. In this game, I’m not sure what the goals are.  Honestly, they could have renamed this game to GRID 3 and no one would’ve been the wiser.

Honestly, driving is what you’d expect. There is a much more arcadey bent to it compared to Project CARS 1 at least. Thankfully, you don’t have to worry that much about oversteering or braking too late on certain corners. Quite Frankly, it really just feels like GRID, only with maybe half a step up on a simulation bent, since GRID is much more of an arcade racer.

Firstly, there’s no damage modeling.  Even if you ram your car head-on with another car, you just kind of bounce off one another. Although the body of the car receives some damage, that’s it. Plus, fuel and tire wear are nonexistent too. So you don’t have to worry about blowing your engine because you received some damage.

Moving on to The Assists, they are certainly odd. There’s no driving line at all, just driving signs.  Corners will typically have three signs associated with them. Red signifies when you should slow down. Yellow shows the apex of the turn and blue denotes where you should exit the corner.  Basically, start breaking on red, drive through yellow and exit through blue.  Most times this lets you Master the Corner, which shows that you took it correctly and you get a bit of experience from it. This is actually kind of a neat idea in practice. But I still miss having a driving line.  Especially because certain tracks in certain night-time conditions are practically undrivable so having a green line would be nice.

There’s also no Rewind or Flashback system in Project CARS 3 either. So, when you make a mistake you cannot skip back 5 or 10 seconds and try again.  So, instead, you have to deal with it. Forcing you to entirely restart the races over and over, which is super frustrating.

Project CARS 3 features a variety of different race types. Although it’s nothing you haven’t seen before.  The obvious one is Race, which is just the default race.  Annoyingly, there isn’t a way to qualify or move ahead in the pack. So, you’ll always start around the middle of the group, like position 14 out of 24 cars and you’ll have to make your way up to the first position.

Hot Lap: this is basically a time trial where you get one lap to set a time on a track and get under a certain time. The faster you are, the better your rank.

Pace Setter: is a variation of this where you are given three laps to race around a track. Then, you are given a time to hit and the goal is to be as close as possible to it during the three laps.

Finally, there are Breakout races, which I am very positive were either in a past Dirt or Forza game. There are gates for you to drive through which have different points associated with them (10, 20, or 50). The goal is to get a high score while doing a single lap of a track.

I would not exactly call that a wide breadth of content there. Now granted, I haven’t completed every class of car racing, but I got about halfway through the career mode and this is all I’ve seen.

By doing races you get both money and experience. Money is used to upgrade your car and buy new ones. But it’s also used to buy into higher categories of class racing.  So, to unlock Road C of races, you’ll need to spend 25,000 credits. And considering some of the paltry winnings you get, it can be a grind to unlock certain things. The first Project CARS had really no element of a career path, or money, so this is something new but not something good either.

Experience points are, in theory, interesting but in practice, they don’t work. You have both a driver experience system and a car one. When you level up your driver, you just get a credit reward. Leveling up your car gives you a parts discount for that car but it goes from two percent to five percent to 10 percent. Whoopie! At a certain point though, it is much easier to just stick with one or two cars and take them from Road E (earliest) to like Road A via the upgrade path. Not to mention, it is much cheaper than just buying a new Road A car from the store.

I wouldn’t say you have to steal the Roulette Wheel system from Forza Horizon 4 when you level up but something more exciting would be nice. Maybe letting you pick a reward from a big Bingo wheel cage would work. Perhaps, do what Persona 4 did and have rewards on cards and you shuffle them around. Here, it just feels entirely mechanical and boring.

This is a mixed bag. Frankly, the game looks fine, but it also didn’t blow me away.  I still look back at the first game with how amazing the rain looked during a storm when you were in a cockpit view. It just doesn’t have the same flair here. The first time I saw a storm I got all excited to see the rain on my windshield and just got bummed out by the end of it.

On the flip side, the audio is good, particularly the music. It has a bit of a smooth jazz vibe to it, and the songs just kind of fade into the background but do sync up well to the racing. I don’t think you should rush out and buy the soundtrack, but it did put me in a good driving mood.

The last two things I’ll talk about are the Multiplayer and Rivals systems.  Multiplayer is functional enough but fairly empty. In the half a dozen different races I tried to get into, the highest player count I found was about 6. The game supports up to 32 players total but good luck getting that to happen. In online play, you can either do quick play, custom lobby, or scheduled events.

Scheduled Events are kind of interesting because you have to actually sign up for them before they start. Races run every 20 minutes or so. Once you sign up, you can qualify on the track. This actually might be the only mode where you can qualify for a position before you race. Once the event starts, you are dropped into the race with other players.

Rivals is basically an asynchronous multiplayer mode with daily, weekly, and monthly challenges for you to hit. Earning you Rivals Points for how well you do and at the end of each month, these points are converted to experience for your character.

This game was reviewed using a digital code provided by the publisher (Bandai Namco).

Ultimately, Project CARS 3 winds up as just a mediocre game. Everything about the game just screams it. Especially compared to the previous two entries in the series. Those games at least had a niche to fill and they did it rather well, even if it wasn’t exactly what everyone wanted. I have no idea who this game is for because of its Jack-of-all-Trades approach. Especially since it doesn’t excel in really, anything. There are several better options out there for racing titles and I’d go with any of those over this game.