It is by no means an exaggeration that when SEGA announced Puyo Puyo Tetris for a stateside release, I immediately knew I would pick it up.  Puyo Puyo Tetris is the reason I bought a Playstation 4 two years ago.  After watching videos of it being played, I pretty much bought a PS4 right then and there. Then, I imported a Japanese copy, and it became my first PS4 game I owned. Obviously, aside from The Last of Us Remastered pack-in title. Now the game is finally in English and available in America. It certainly meets expectations in so many ways. 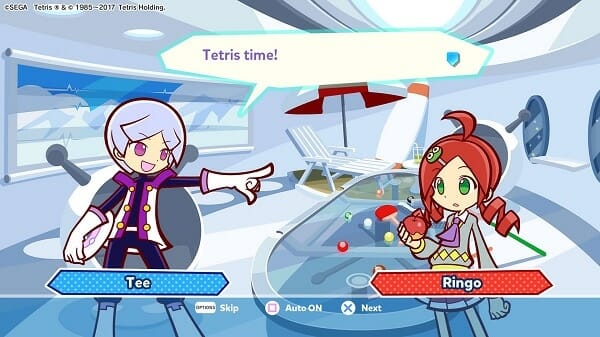 Puyo Puyo Tetris’ story is almost complete nonsense and that kind of makes it great. The story is based on some other games in the franchise because it drops you right into it. While expecting you to know who these characters are. You start off with Ringo who is a Puyo player and he is transported to Tee’s (Tetris player) space ship. Then, they realize that the dimensions are somehow merging and both Ringo’s friends and Tee’s friends try to uncover who is doing it, so they can stop it. A lot of it is over the top. However, considering the source material, it is perfectly fine.

Puyo Puyo Tetris is a fusion of both Puyo Puyo and Tetris.  I’ll briefly explain both games, though I doubt Tetris needs much of an explanation. 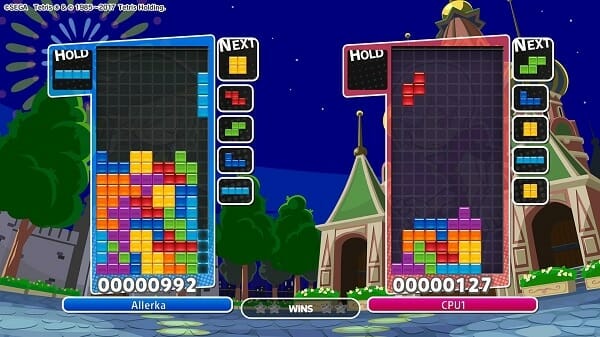 Tetris is founded on the idea of putting together Tetriminos (four-blocked shapes) together into lines, which get eliminated once an entire row is cleared out.  There are seven Tetris pieces. The idea is to form up groups of the pieces and eliminate them with the long piece, which scores you more points.  Honestly, Tetris is the definitive game out there, and I would wager practically everyone has played it sometime in their life. 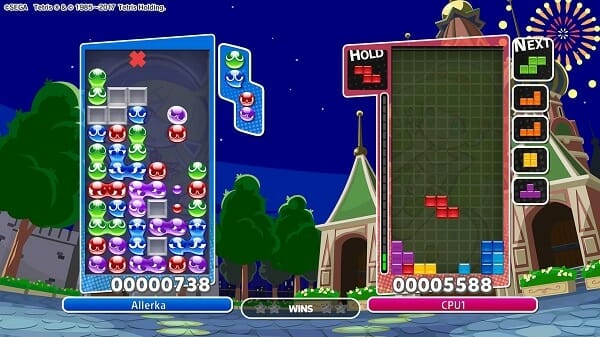 However, Puyo Puyo deserves an explanation. Especially, since the game has a fairly shaky foundation when it comes to America.  It is somewhat related to Tetris, but not really.  Instead of clearing lines like in Tetris, the goal in Puyo Puyo is to group four (or more) of the same color Puyos together into a cluster.  These clusters actually form the Tetriminos shapes, which is how it is related to Tetris, but this is its only real relationship.  The only way to lose in Puyo Puyo is to fill your board so much, that the red X at the top is filled, which causes a game over.

Color plays a big role in Puyo Puyo because you have to group colors together.  Once a grouping of Puyos clear, whatever is on top of them drops down.  The idea here is building combos together from Puyos dropping. Thus creating cascading combos, which drop garbage on the other player’s area.  In general, unlike with Tetris, Puyo Puyo requires a lot more strategic thinking. You have to figure out the best ways to create huge combos. Although, it’s not always clear how to do so.  It’s not a knock against Puyo Puyo perse’, but I’ve spent over 25 years playing Tetris, so it’s a lot harder for me to wrap my head around. 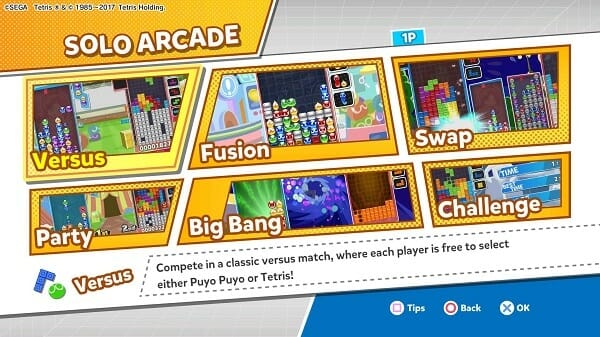 Versus — This is fairly simple, you play against the A.I. in either Tetris or Puyo Puyo matches.  One can play Puyo Puyo or Tetris. However, not at the same time.  You can also set what game the A.I. plays as well.

Fusion —  In Fusion, both Puyo Puyo pieces and Tetris pieces take turns falling.  It usually goes in blocks of six or five. Six Puyos or five Tetris pieces.  Tetriminos are heavier than Puyos, so when they drop, they push up whatever Puyos are beneath them by one level.  However, when you drop a Tetris piece on a colorless (garbage) Puyo, it pops that Puyo, giving you more space on the board.

Swap – Swap starts off randomly. Either playing Puyo Puyo or Tetris.  You play the game for 25 seconds and then it alternates to the other game mode. There are two game boards, one for each game. You must pay attention to both as well. When the game switches, the last piece is still falling.  If it makes a combo, the bonus is transferred over to the new board, but if it doesn’t, it simply disappears. 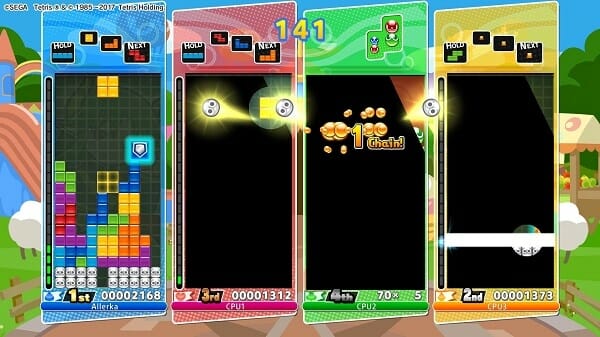 Party – Party mode is a lot like Versus mode, with a few twists.  The biggest one is that there are items on the board.  When you clear a line (or surrounding Puyos) around an item block, it disappears and the item is used.  Item effects range from causing pieces to fast drop on the other player’s board, to causing blackness on their board. There’s even freezing their Puyo board, or causing very odd shaped Tetris pieces to appear.  Not all items are offensive, as there is a shield, or “clear garbage” items as well.  This is a score-based, three-minute affair, and you have infinite lives.  Should your board fill up, it resets. But the reset also takes a lot away from your score.  The winner is the one with the highest score at the end.

Big Bang —  Big Bang is probably the hardest mode to actually describe.  You pick either Puyo Puyo or Tetris. Then, you are thrust into a fast-paced mode where you have to clear puzzles. Basically, it means finding the right spots for your pieces to clear the board.  The Tetris side of this mode is pretty easy, but the Puyo Puyo side is a real challenge.  You are playing against other players and you have 60 seconds to clear as many boards as possible.  Once the round is over, the game calculates who did the best, and damage is dealt on other players, based on how many boards are cleared.  It is a very weird mode. One that is frantic, but also pretty fun. 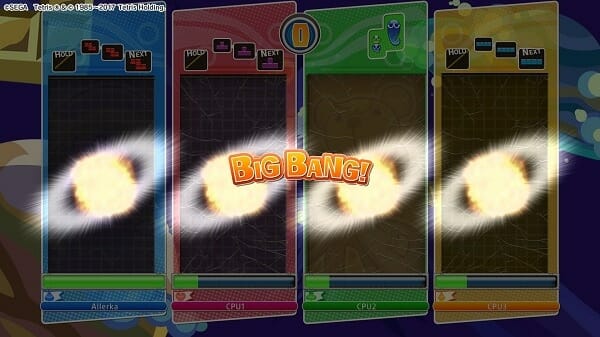 Challenge – Finally, there is Challenge mode, which is a whole other subgroup of modes. However, they don’t require a huge breakdown.  These are basically endless modes. Clearing a set number of lines, or reaching a high level in the quickest amount of time. There’s “Tiny Puyo” mode, where the Puyos are extra small. Essentially this is the mode where you can play single-player Tetris or Puyo Puyo, for as long as you want. 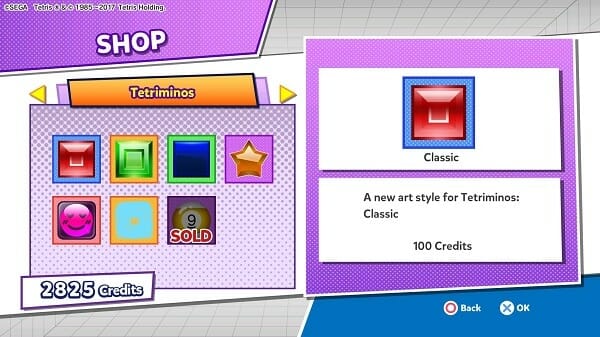 Puyo Puyo Tetris also has online and local competitive modes.  Almost all the modes are playable against other people. Although, if you plan to play against others online, prepare to get wrecked by people playing the Japanese copy. Since they know more about Puyo Puyo than you ever will.

There’s also an in-game shop where you can buy different visual styles for Tetris and Puyo Puyo. As well as different voices for the characters.  It’s not groundbreaking, but it does give you something to unlock, at least.  Lastly, there is a tutorial mode to help new players understand the game better.

The only real problem I experienced with the game, is some slight A.I. inconsistency.  If you’re playing a Versus match against multiple A.I. opponents, you can have an easy time in the first round. But, then you may get absolutely obliterated in the second round. This happened multiple times, and I’m not sure what really causes it.  Also, the deeper you get into story mode, the more challenging, almost bordering on unfair, it becomes.  Thankfully, you can bypass a particular story level, if you fail at it three times.

Overall Thoughts: 9 out of 10 Puyo Puyo Tetris remains as much a classic in English, as it is in Japanese.  It combines two of the best puzzle games together into one package. You could literally play them forever, if you are so inclined. There are normal game modes and there are at least two other game modes that combine the games together into interesting new variants.  If you have any affinity for Tetris, this is a must buy. This is easily the best Tetris game in years.

For the sake of transparency, the publisher (SEGA) provided a digital copy for review purposes.