Capcom‘s proliferation for collections remasters, and now remakes certainly has its ups and downs. Then everything changed with Resident Evil 2 remake, which now is the standard for how a remake should be judged. So, when it was announced that a Resident Evil 3 remake was actually being developed at the same time as the RE2 one, many wondered if RE3 would be similar. However, Capcom opted for a more linear and straightforward approach with RE3 that strips out the puzzles and choices from the original. While some aspects are definitely improved, such as character depth and explorable areas, the true feel of the source material was not retained. 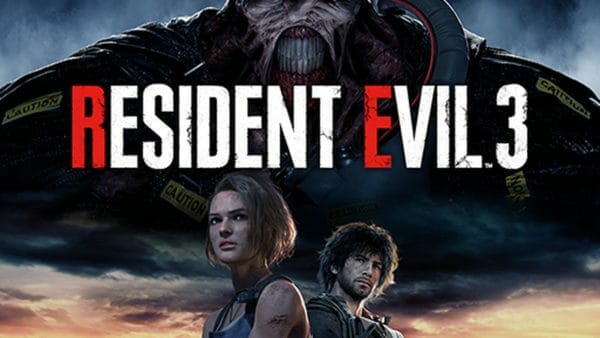 Resident Evil 3 takes place both just before, and just after, the events of Resident Evil 2. The story follows Jill Valentine, who is investigating the Umbrella Corporation after the incident in the Arklay Mountains.  She receives a phone call from a former teammate of the Special Tactics and Rescue Service (S.T.A.R.S) Brad Vickers. He tells Jill that she needs to leave the city immediately. The call comes too late, as a giant bioweapon breaks through her room wall and the chase is on.

Jill is able to escape the monster, later uncovered to be the Nemesis-T Type, but not for long.  Jill gets help from an Umbrella Biohazard Countermeasure Service (U.B.C.S.) mercenary, Carlos Oliveira. The two form a dysfunctional union as they try to help any remaining survivors in the city, uncover more secrets hidden inside Raccoon City and evade the relentless Nemesis.

Unlike the previous edition in the series, RE3 allows you to explore some of the city streets of Raccoon City.  The impressive part is that there are several stores and buildings that you are able to enter, some with the help of tools along the way.  Unfortunately, that section of the game is very short-lived, and the game turns into a linear path quickly. There are several locations that Jill and Carlos can explore, and that does help keep the game feeling fresh throughout the 6-hour campaign.

However, Longtime RE3 fans will notice a few big sections of the original missing from this version.  Also, absent from the remake are several of the puzzles.  The original RE3 had several interesting, albeit, over the top puzzles that helped balance out the pace that Nemesis brought. This time around, the puzzles have been nearly dropped completely, giving the game a more straightforward and fast-paced approach. Although it does help keep the heart rate up, it certainly doesn’t knock the feeling of a shorter experience.

Jill is a veteran when it comes to the undead, after dealing with many of them in Spencer Mansion, and the game reflects that. RE3 is a far more action-based game, so ammo is more generously available. And while you are not able to just blast away at every single enemy in the game, you do have more leeway to shoot your way out of a situation.  The feeling of being down to your last clip only really occurred during a few of the boss fights during my playthrough.

Further enhancing the action, is the dodge mechanic that’s brought back from the original. Allowing Jill to get a jump on an enemy if timed right. However, the timing can be a little tight, which gives a sense of risk and reward in using it. Honestly, it is truly more of an offensive maneuver, than a last-second evasive one. It serves its purpose well, while also not allowing someone just to spam the dodge button and avoid all danger.

Enemy types have expanded from Resident Evil 2, and every single addition brings with it something completely unique. For example, the Drain Deimos only have a short section in the game, but they make the biggest impact. These bug-like creatures skitter around the small corridors, always just out of focus, making you feel completely uneasy. If they grab a hold of Jill, they dump their eggs down her throat and wait for them to hatch from inside of her. Quite frankly, its pretty gross. Although Nemesis might give you jump scares when breaking through a wall, the Drain Deimos will make your skin crawl and keep you on your toes the entire time.

There are also two different forms of Hunters in the game.  The first nicknamed, Frogger, who are just giant blobs. They lurk through the sewer and have enormous mouths that swallow you up instantly.  They are so large that they barely fit in the passageways, and the drool coming off their mouths adds to the disgustingness of their design. The Hunter Betas more resemble the Hunters from the original game.  Large amphibious creatures with giant claws who are surprisingly fast. There is even a nice little call back to the original game when you encounter one of them as well.

Along with the new enemies, and Nemesis, the classic baddies also return. Zombies are thoughtfully placed this time. Lurking just around corners, behind garbage cans, or just in a big enough group to cause an issue.  The problem is, they are so well thought out that they break rules established in older games.  In many locations, zombies are laying on the floor, making you wonder if they are going to start moving or not. In previous games, you could use the knife, or take a shot, to check and see if that wakes it up or not.

While there are a few zombies in RE3 that use this mechanic, others are placed there for a return trip.  Even after checking the zombie the first time around, it may suddenly stand up as an added threat on the next go around.  While it does give off the sense that you are never safe, it does take you out of the experience too. Lickers and Hellhounds also make an appearance, but they are kept to a few small instances. However, spiders continue to be left out of these remakes.

Of course, it wouldn’t be RE3 without Nemesis. Who might get a bad rap because of how much Capcom improved Mr. X in RE2. in the RPD, Mr. X literally stalked you, giving you a true sense of dread. Hearing his footsteps on the floor above you while trying to solve a puzzle gave an utter sense of fear not felt in other survival horror games. It feels like everyone wanted that with Nemesis too, and that is just not the case.  Other than a small section early on, Nemesis is used much more like a set-piece.

Jumping out at you during inopportune times causing as much havoc as possible. Although many may be disappointed by this, I feel that most of it is faithful to the original. While it would be great to get a Nemesis version of Mr. X, with him always following you, it just wouldn’t work in this game. Most of Resident Evil 3 is too linear.  In RE2, there were plenty of ways to escape most rooms, and the RPD felt open. RE3 just doesn’t have that feel, and it would just be Nemesis pushing from behind you the entire time, it just wouldn’t feel right.

Raccoon City is a Knock Out

The RE Engine continues to be one of the best in the industry, creating amazing graphics and cutscenes. It is tough not to get lost in how gorgeous the destruction of Raccoon City is. There is so much detail littered around the city streets that You could search for hours and get lost. Enemies and character models really pop off the screen and the gore and blood look amazingly disgusting. Each location that the main heroes visit feels unique and has their own feel to it. The music is intense as well, which just engrosses you more into the world of Raccoon City. The disgusting sounds from the monsters are fantastic and really capture the horror aspect. Atmosphere has never been an issue with the RE Engine, and Resident Evil 3 is another great example of it.

Unfortunately, RE3 only has one campaign to play through, unlike the four in RE2.  There are no extra modes, like the last survivor or playing as a block of tofu.  It does offer replayability in the form of added difficulty levels, and unlockable items though. There are also different objectives in the game, and each time one is completed you are given coins to spend in the item shop.  This shop gives you damage or armor boosts, new weapons, unlimited ammo or even access to key items that are found later in the game too.  While it does feel like a different way to attack the story, it ultimately feels empty.

There is a place to check out character models, but not a place to listen to the fantastic soundtrack. The costume variations are also lacking. Resident Evil 2 had plenty of replayability, and extras to consume as well. While also being loaded with fan service for long time fans.  Resident Evil 3 is just a straightforward playthrough of the last of the PlayStation trilogy.

Overall, Resident Evil 3 is a great game hindered by the underlying feeling that something is missing. The campaign, while a bit on the short side, is still an immersive experience that will keep you on your toes the entire time.  Each battle with Nemesis feels unique and different. Enemy types are varied nicely and there are some amazingly creepy sections in the game as well.

RE 3 is also gorgeous and one of the best looking games of this generation. However, the missing sections, lack of real replayability, and minimal extra fan service really hinders this from reaching the heights of the fantastic Resident Evil 2 remake.