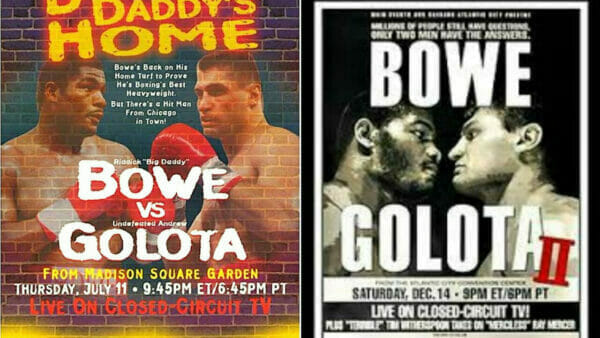 Pat Mullin and Mark Radulich look at all the great fights in boxing history. This time they are presenting their Riddick Bowe vs Andrew Golota 1 and 2 Review.

Riddick Bowe vs. Andrew Golota, billed as “Big Daddy’s Home”, was a professional boxing match contested on July 11, 1996. The fight was held at Madison Square Garden in New York City and was televised as part of an HBO World Championship Boxing card.

Bowe won the fight by disqualification in the seventh round after Golota did not adhere to several warnings and point deductions for punching Bowe in testes. A melee erupted in the ring following the decision, which led to several arrests.

Riddick Bowe vs. Andrew Golota II was a professional boxing match contested on December 14, 1996. The bout was a rematch of a controversial fight held earlier in the year at Madison Square Garden as part of a nationally televised HBO event.

As was the case in the first fight, Golota was performing well enough to win, yet once again could not stop fouling Bowe and was disqualified for repeatedly punching Bowe in the testes.

Check out our previous Boxing Podcasts.