Once again, video highlights of the awesome main event from Death Before Dishonor XIV kick us off.

At first, The Bullet Club (Adam Cole, Hangman Page, Guerillas of Destiny, and Yujiro Takahashi) come on down to the ring. It’s story time with Adam Cole BAYBAY~!!! Cole talks about keeping promises, specifically when it relates to the RoH World Title. He then says that The Bullet Club all have targets on their backs because they are very best in professional wrestling. Out comes Jay Lethal, who says this thing between them ain’t over yet. Cole mocks him, and says he’ll always be better than Lethal. Cole says he has the night off, and talks all about how he’s also packing the Bullet Club. Lethal says Cole can have his precious night off, but he wants Cole to remember that he’s got friends too. Out come Los Ingovernables’s Tetsuya Naito & EVIL. Sounds like a match might be brewing up here.

We get the announcement that next week, Adam Cole, Hangman Page, and Yujiro Takahashi will take on Lethal, Naito, and EVIL in six man tag team action.

Highlights of the RoH World Tag Team Title situation from last week are shown, which show The Addiction in a rather embarrassing light. The Addiction are ringside, and they are irately talking to Nigel about how they are sick and tired of Ring of Honor trying to embarrass them with this “doctored” footage.

Next, we get some highlights of the Legacy of Hatred storyline. We get some talk about Punisher Martinez joining up with BJ Whitmer. It’s still weird folks. 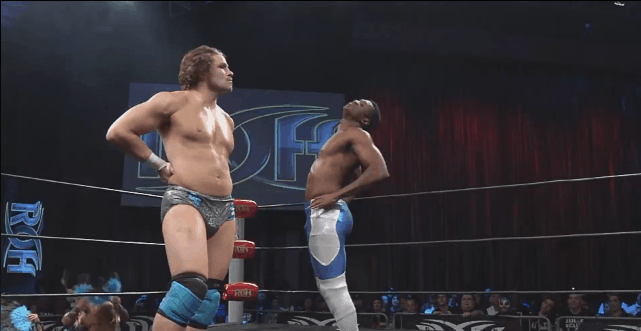 The two tease a thumb war at the start before Dalton gets the single leg takedown. The two trade some poses and headlocks before we finally get down to business. ANX start messing with The Boys on the outside, but the referee tosses them out! It seems the distraction has paid off, as we return from commercial with Caprice in control. Dalton comes firing back with a big lariat though, and he’s like a rolling stone! ANX come back out for another distraction, but The Boys take them out with stereo tope con helios! The crowd just loves Dalton and The Boys so much, and these two teams are bound to be in the RoH World Six Man Tag Team Title tournament. Perfectly fine match here. **

Some highlights of Jay Briscoe and Jay White’s time limit draw air to hype up the main event later this evening. 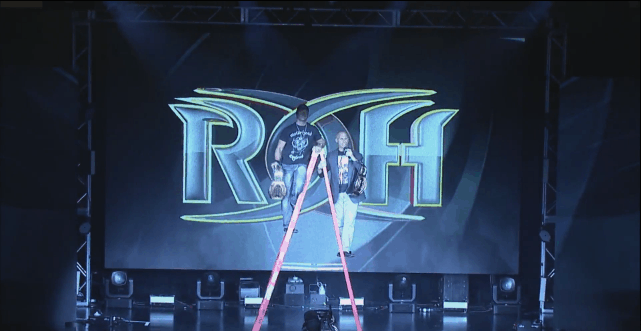 The Addiction are back out on top of a ladder, and they are running Nigel down. They run down the list of teams they’ve beaten, and compare themselves to the top rung of the ladder. Conversely, this makes all those other teams they’ve defeated the rungs below them. The ladder imagery just screams what’s coming at you.

Bobby Fish gets some promo time to talk about his RoH World TV Title match next week against Katsuyori Shibata. Sweet lord, that’s gonna be awesome! 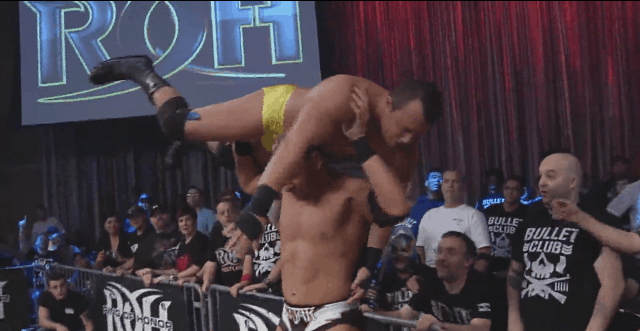 Manny Lemons? Really? Welp, we already know how this one will pan out. Lemons slaps Dijak in the face for the Code of Honor. This poor guy just goofed. Bad. Dijak literally tosses him out of the ring, and shortly tosses him right back in again. Manny doesn’t last much longer past that. Nice knowing you Manny. SQUASH

Post-match, Prince Nana talks about how it doesn’t matter who the Television Champion is. Whether its Bobby Fish or Katsuyori Shibata, the result will be the same. Dijak is gonna beat ’em, and will become your next RoH World Television Champion.

After that, we get a hype video for the Women of Honor Video on Demand special. It’s ten bucks folks, and absolutely worth your time. 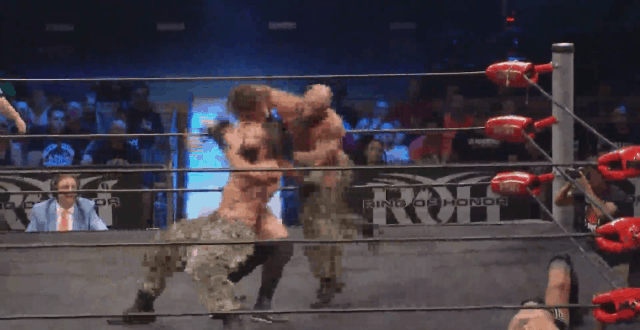 Winners: The Briscoes via Doomsday Device

This should be really good. Jay Briscoe & Jay White had an awesome match a few weeks back, Lio Rush is can’t miss television, and Mark Briscoe might be the most consistent guy in Ring of Honor. Lio and Mark start us off with some quick offense, but both Jay’s end up back in the ring together. White gets floored with a boot wash/running dropkick combination in the corner. After we return from commercial, the offense starts flying around fast and furious like from all four men. The Briscoes take control of the match by isolating Lio Rush, but Lio finally makes the hot tag, and in comes Jay White! Briscoe & White start trading some big blows, but Jay White shortly gets the advantage with a big dropkick. Big missile dropkick from White onto Jay Briscoe sends us into another commercial break.

Suplex/Low Down frog splash welcomes us back, which nets White & Rush a near fall. White and Rush continue the double team maneuvers to some more near falls, and were cooking with gas here going into the final stretch. I’d be okay seeing these guys as a tag team moving forward. Death Valley Driver/Froggy Bow combination almost nets the Briscoes the win, but White pushes Jay back into the pinfall to break it up! DUEL ROARING ELBOWS ON JAY WHITE! After that horrific display, White and Rush’s hopes for victory were dashed. They did, however, prove they could hang with one of the top tag teams in the world. ***

It’s announced that Lio Rush, Jay White, and ACH will face The Briscoes & Toru Yano in the first round of the tournament to crown RoH World Six Man Tag Team Champions at All Star Extravaganza.

Nigel talks to the television camera, and we see The Addiction watching backstage. Nigel says they looked awfully comfortable on top of that ladder. So, at All Star Extravaganza on September 30th, they’ll defend the RoH World Tag Team Titles against The Motor City Machine Guns & The Young Backs in… LADDER WAR! The Addiction are livid, and we’re outta time!

Overall Rating: 6 out of 10 Another solid outing for Ring of Honor Television. The smaller feuds in Ring of Honor got some time to shine this week, and the big match announcements for All Star Extravaganza make the show very intriguing. The wrestling may not have been as top notch as last week’s show, but the build was still there, and that’s really all you can ask for.