SnowRunner is an odd beast. I wanted the game because it looked really visually impressive, the settings looked great and it was all about challenging yourself to thread the needle in getting your truck down a road or up a mountain. While that feeling certainly does exist, there are some design and technical hurdles that can get in the way of the most enjoyment of the game. 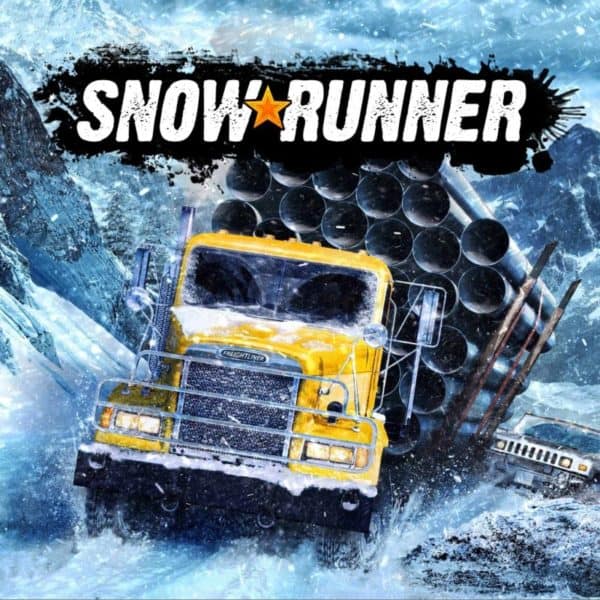 SnowRunner is the second in a series, the first game being called MudRunner.  MudRunner is actually a spiritual sequel to an earlier game called Spintires, which was an interesting proof of concept, but barely a game.  With the history lesson out of the way, now we have SnowRunner.

The main goal of SnowRunner is to deliver cargo from one place to another.  It’s a bit like Death Stranding that way, only with a better story.  Come on, I have to make the obvious joke.

Typically, you’ll have to deliver a trailer full of cargo from one point on the map to another point, or even possibly to a different map entirely. While also keeping the cargo contained on said trailer and hopefully keeping your truck in upright working order. There are some other missions that might involve you rescuing broken trucks in the world, or climbing high mountains to reach goals. However, at least 95% of the missions involve you hauling cargo to someplace.

There are three different regions in the game: Michigan, Alaska, and Russia. Considering that I live in Michigan, SnowRunner’s depiction of it as a swampy, empty, hellscape with roads that are barely paved, is actually fully accurate.  Alaska is obviously much snowier/icier, and you need to plan for that. While Russia is much the same as Michigan, but with even less infrastructure (if that’s even possible) and more restrictions on vehicles. Basically, in Russia, you’ll have to buy replacement vehicles for ones that you used in the States.

Each region has a few different sub-regions in them.  Typically, the first thing you’ll want to do once you get to a new area is to find your garage. This is where you go to change your vehicle, do repairs or refuel for free, and where you can teleport to if you really get stuck in the environment. Trust me, this is super important to do before you start tackling an area.

Most missions, as said above, just involve you transporting stuff from one place to another.  This accounts for like 95% of the game. There are some missions that might involve you on a bit of a scavenger hunt, like finding oil deposits with specialized machinery. However, those are a very small amount of the other missions.

Although transporting missions are what you would expect, there are a few differences between them. Main missions involve you completing slightly bigger or more involved jobs. Then, there are side missions, which are a tad easier but don’t pay as much.  Finally, there are infrastructure missions.  These involve fixing issues on side roads such as repairing bridges or cleaning up rock slides. After completing these missions you are rewarded by gaining the ability to travel on these roads and thus making travel in the area much easier.

You may be wondering what the point is?  Or that the game seems fairly easy, it’s just delivering stuff.  Well, the real trick here is that the game is actually punishingly hard. You’ll frequently get stuck, rollover, or have some catastrophe happen to either your truck or your trailer that will have you needing to start over or to grab another truck to pull you out of some situation.

The terrain is the true archenemy in SnowRunner. Muddy roads, icy hills, rushing creeks and more will cause your vehicle to spin-out, sink, or become damaged. The entirety of the game is a constant battle against the terrain. There aren’t enemy trucks to damage you, or an enemy soldier wanting to blow up your rig. There are perilous trails to conquer, or muddy bogs to contend with though. However, these are much more dangerous, and you’ll need the right tools to get the job done.

By far your most important tool is your winch. At any point, you can deploy it and connect it to a Valid Point in the level to help either right your vehicle, tow it to safety, or in giving yourself an anchor point when trying to go across a muddy path. I say valid point because you can’t just connect to any object that you see. There is also a semblance of a strength chart available. For example, it is much safer to attach to an electric pole or a huge tree, rather than just some branch laying in the road.

Your winch is also governed by your engine, at least initially. This means that if your engine stalls out and dies, your winch becomes useless. You can eventually buy winches later on that have their own engine, but it’ll take you some time before you can get them.

Other tools to consider is if your truck has All Wheel Drive or Differential Locks.  Both let you fight the terrain with more power or grip, but they come at the expense of using more gas. Although you can buy more gas for vehicles and repair trailers to fix your truck.

One credit I’ll give to SnowRunner is that playing with someone else, or a few other people, can make the game infinitely easier. Say you are in a truck hauling some cargo, but you get stuck in a swamp. If you’re playing alone, you can try to winch yourself to a spot to get you out or rock your vehicle to get out. However, you may realize that your only two options are to either drive another truck to come help you out or teleport back to the garage and try again.

With someone else playing, a third option becomes available. Your friend can help you out. In this case, they can either winch you out themselves or let you use their truck as a winch point to get out. Now, let’s say you have a mission that requires four items, two pallets of bricks, and two pallets of replacement parts. There are trailers big enough to accommodate that all, but the trailer is longer and more difficult to drive. Instead, you and your friends can split the load, making it far easier to actually accomplish the mission.

The Problems: Technical Woes And the Static Environment

While it is much better currently than it was at launch, there are still some kinks to be ironed out.  Within the first hour of me playing the game for the first time, it crashed twice. I haven’t had any crashes since, but it stuck with me.

The larger issue is that some missions seem arbitrarily broken. For example, I would go to a mission drop-off point with the correct cargo and it wouldn’t register. Even if it said I had the right cargo, it wouldn’t let me drop it off.  There was one bridge that needed four things, two planks of wood and two metal girders.  I tried to deliver the girders first but it would NOT let me do it, despite the game not caring about the order of materials before or after. I had to drop off the planks first. Then, the girders, which became a huge hassle. It’s not to say that the game is fundamentally busted or anything, but sometimes it seems like missions are just going to break apart or not complete, even if you’ve done the work.

The more philosophical issue is how the game world is designed. To say that it is a static environment is an understatement.  While there is weather and terrain deformation, the rest of the world seems largely dead. There are no animals, or other people, or vehicles on the road. It doesn’t need to be packed with stuff, but entering a small town and having it be completely vacant, is a very eerie feeling. The only real thing that changes is when you do the infrastructure missions.

An actual story or narrative would also have been welcome. There are main story quests, but there is no real context to them. This game really could have used Nick Offerman doing his best Ron Swanson voice, giving you missions or some small talk over the radio. Something like this could have really helped with the immersion factor and give you an actual reason to do missions, aside from some paltry sums of money or experience.

Even creating bosses for each main region that give you missions, or occasionally talking to you would have helped. To be fair, there is a lot of enjoyment in just chugging along in your truck, enjoying the visual splendor of the game, but it can almost be too solitary at times.

Even with a few bumps in the road, I really enjoyed my time with SnowRunner. So much so that I’ve been continuing to play it even after finishing the review. It’s the perfect veg out game where you can just boot it up and have a somewhat relaxing time exploring a mountain, looking for new parts, or going out on a delivery run to an isolated farm. Although it is relaxing, it is still fairly challenging to handle.