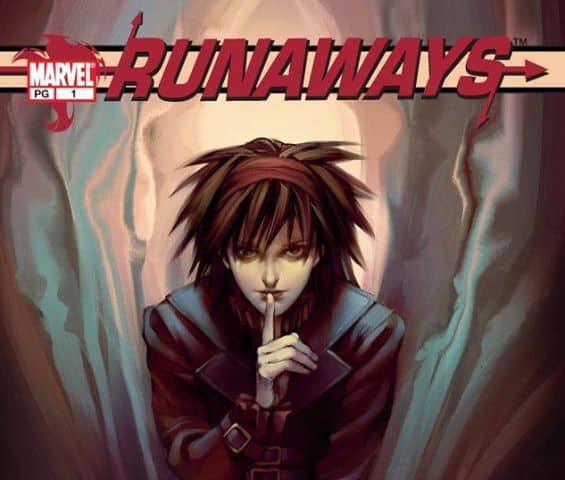 An intro for the story as provided by http://marvel.wikia.com “Every year, the Wilders hold an annual gathering of the same five families and their children: Gerturde, the whiny yet intelligent daughter of Mr. and Mrs. Yorkes; Karolina, the light-hearted vegan daughter of actors Frank and Mrs. Dean; Chase, the rebellious jock son of Victor and Mrs. Stein; Molly, timid daughter of Dr. and Dr. Hayes; and Nico, the goth daughter of Mr. and Mrs. Minoru. After all of the families arrive at the Wilders’ mansion and mingle in the foyer, the parents head to the library while they send the children into the game room. Boredom ensues for the kids and so Alex suggests that they spy on their parents by way of a secret passage he found when looking for Christmas presents. Upon finding a two-way mirror into the library, the kids discover their parents dressed up and believe them to be superheroes, The Pride, as Alex’s father calls them; however, as they watch, Mrs. Wilder escorts in a young woman and the children begin to question their parents actions.”

Don’t forget to also give that Radulich in Broadcasting Network page a like. You can find us at your convenience on blogtalkradio.com (link below), Stitcher, TuneIn Radio, Spreaker, or iTunes! Just search “radulich” to subscribe to the network that Source Material is a part of! if you would like to follow me on twitter, you can do so by finding me @stiznarkey also the show’s twitter is @sourcematcast. The guys get together to discuss this first volume of Bryan K. Vaughn’s “Runaways.”

Source Material is a comic book podcast that discusses some of the great and sometimes not-so-great comic book story arcs that have been published. Usually hosted by Jesse Starcher and his good friend Ronnie Adams. They bring on a multitude of guests to talk comic book storylines. Sort of like a book of the month club, but with comics. They also throw a dash of current events in every once in a while. Or just shoot the breeze with some of their “BS” episodes. Just trying to keep it casual and fun.

The reason Ronnie started the Screaming Boy Podcast is that he’s always loved discussing things that he’s passionate about (as most anyone does). This gives Ronnie an opportunity to gather friends and likeminded (and sometimes not so likeminded) people together and talk, laugh and just have a good time talking about what they love. The biggest influence in this was Kevin Smith. While watching one of his “Evening With” specials, he gave his reasoning behind making Clerks. Hit or not, he made that. He left his mark. That inspired Ronnie. Thus, Screaming Boy was born. This opened up opportunities to become friends with other podcasts and be invited into the Radulich in Broadcasting Network who also plays the show and has given Ronnie the opportunity to co-host with Jesse Starcher on Source Material.