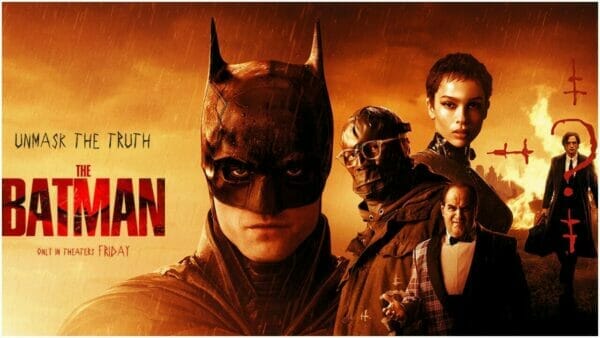 The Batman (2022) is an American superhero film based on the DC Comics character Batman. Produced by DC Films, 6th & Idaho, and Dylan Clark Productions, and distributed by Warner Bros. Pictures, it is a reboot of the Batman film franchise. The film was directed by Matt Reeves, who wrote the screenplay with Peter Craig. It stars Robert Pattinson as Bruce Wayne / Batman alongside Zoë Kravitz, Paul Dano, Jeffrey Wright, John Turturro, Peter Sarsgaard, Andy Serkis, and Colin Farrell. The film sees Batman, who has been fighting crime in Gotham City for two years, uncover corruption while pursuing the Riddler (Dano), a serial killer who targets Gotham’s elite.

Check out our other Batman reviews as well as reviews for films from the DC Universe.

Unmask the Truth. The Batman 2022 Review