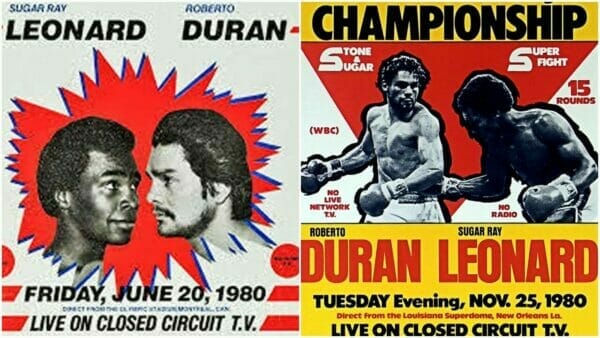 The Four Kings of Boxing: Leonard vs Duran 1&2

Pat Mullin and Mark Radulich continue with their newest history of boxing podcast series on the Four Kings of Boxing this time focusing on Leonard vs Duran 1&2.

Roberto Durán vs. Sugar Ray Leonard II, billed as “The Super Fight” and later popularly known as the No Más Fight, was a boxing match which took place on November 25, 1980, at the Louisiana Superdome in New Orleans, United States. It was the second of three bouts between the pair. It gained its name from the moment at the end of the eighth round when Durán turned away from Leonard towards the referee and quit by apparently saying, “No más” (Spanish for “No more”).

If you want more boxing content, be sure to check out Mark and Pat’s first boxing series History of Heavyweight Championship Boxing where they go through the entire history of the heavyweight title from its beginnings at Jack Johnson to the present day with Tyson Fury.

The Four Kings of Boxing: Leonard vs Duran 1&2