The Last Guardian is a game that no one believed would ever get published. The now defunct Team Ico began developing the game in 2007. Sony announced the game at the 2009 Electronic Entertainment Expo. Since that announcement, The Last Guardian went through multiple massive delays. Needless to say it is a miracle that the game finally released, albeit nine years later.

I am a huge fan of Team Ico games’. I played and beat Shadow of the Colossus at least five times. So, it is not an understatement when I say the Last Guardian has been one of my most anticipated games of all time. To no one’s surprise, the game has a lot of issues, some more frustrating than others. Despite that, The Last Guardian is a game that should be experienced. 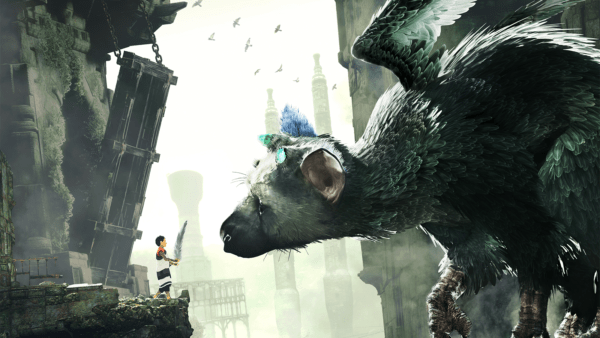 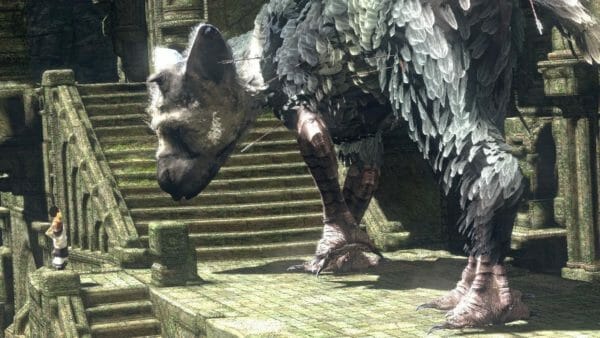 The game starts with a young boy waking up next to a massive griffin-like beast named Trico in the middle of a cavern. The beast is chained up, hostile and injured. This is how the beautiful relationship between the two begins, which also happens to be the first of three major storylines.

The second plot line asks one to discover, what is Trico and what is the purpose of his existence. Lastly, the third storyline is to find where they are and how to escape. These three plot points are told in minimal fashion. This is the same method used in Team Ico’s previous two games. For many, this style of storytelling can be considered boring. For this game, it actually works because it insinuates the calm beautiful world it set out to develop.

The relationship between Trico and the young boy is the strongest story beat. There’s a real connection between the two. A connection I became emotionally invested in, so much so, it urged me to see how their story played out. Unfortunately, the other storylines didn’t quite live up to their potential. I was driven to finish the game, searching for a solution to those two mysteries but alas, the answers felt very underwhelming. 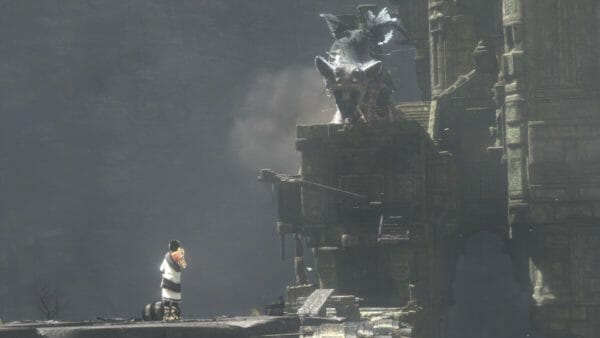 Seeing as Last Guardian was originally planned for the PlayStation 3, I was expecting the graphics to look dated. However, I was surprised at how gorgeous the game actually looks. Other than small instances where the foliage and Trico’s feathers look flat, everything else looks great in 1080p. I do wish there was a little more variety in the environments, but that’s a small quibble. 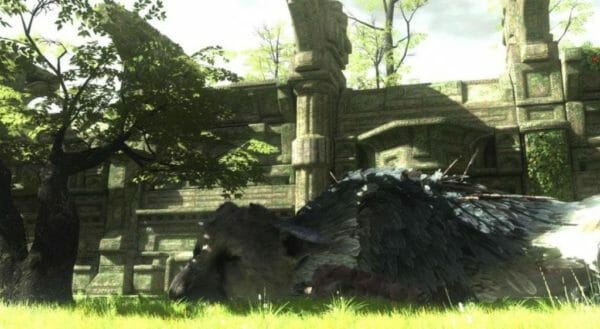 I loved watching all the dramatic scenes of Trico floating or flying in the air. It’s utterly impressive how Trico’s injuries are depicted. For example, the blood that releases from cuts or scrapes doesn’t disappear until he jumps in the water. Trico’s expressions are extremely lifelike and his actions are similar to that of a pet dog.

Visually, it’s weird and cute seeing this massive beast roll around or whine like a puppy. At times, I would stop my progress and just watch Trico in amazement. Especially since you can see his mood through his eyes. Trico is one of the main reasons to play the Last Guardian. There’s simply nothing like him in a video game. For this reason, he is one of my favorite characters of 2016. Not to mention, the most unique A.I. companion you’ll ever encounter. Mainly, because he can be very polarizing as well. 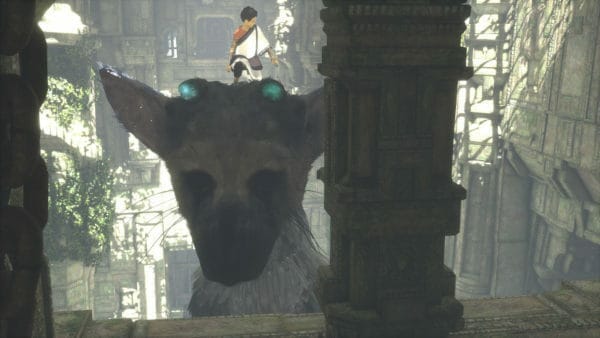 While being one of the high marks of Last Guardian, Trico also brings with him an annoying frustration. Like any domesticated animal, Trico doesn’t always listen to your commands. For the first half of the game, this was ok because Trico was acting like a pet.

But once the novelty ended, it started becoming ridiculous. At one point, I tried for 20 minutes to get Trico to dive in the water. Once he did make the dive, it became a struggle to get him to go through the tunnel as well. So, I had to reset and spend even more time with him, because he wasn’t responding to my commands. At another section, I spent another long period trying to get him to jump on ledges. This was certainly not the last of my frustrations with Trico. 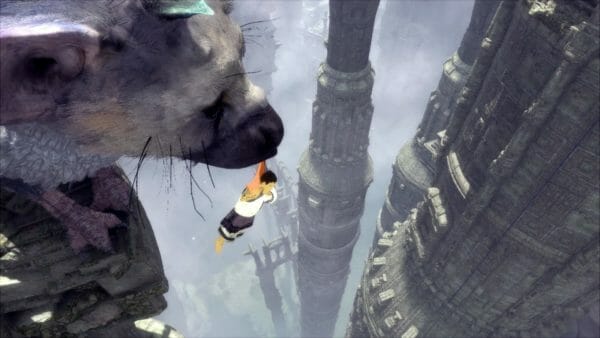 For the most part, the game is fun. I normally enjoy these kind of platforming puzzle games reminiscent of the Prince of Persia franchise. The gameplay is pretty simple. You are either finding barrels of light to feed Trico. Opening gates, jumping on ledges, or running away from creepy monoliths. You’ll even use Trico to blow things up on occasion too. Although, there were times where I hated the puzzles as well. Specifically, the “moving barrels to Trico puzzles” because the controls made these easy puzzles, into a massive undertaking.

Another example, is one water cave puzzle where you have to move a crate in the water and somehow climb back to the surface. Sadly, there was zero indication on how to solve said puzzle. After a very frustrating long period of time, I found out I had to move the crate to a random spot in the corner and then call Trico. Considering there is a voice over that eventually gives you hints, I would have really appreciated a concrete hint in that moment. 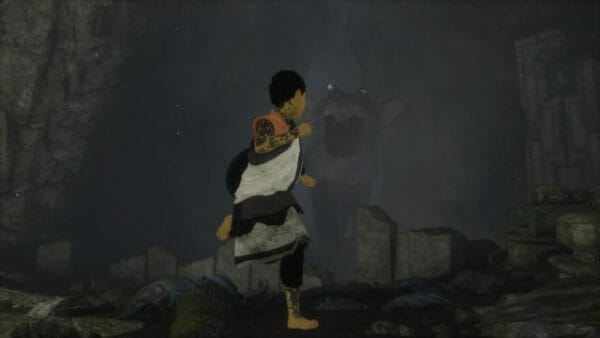 The worst part of The Last Guardian is its controls and camera movement. Team Ico games are known for their bad controls, but they’ve never been this bad. I probably could have beat this game in half of the time I did, if it wasn’t for the controls.

At every point of the game, I was fighting the controls and the camera. I can forgive the game for having frustrating controls with Trico, but not for the young boy. Half of the time, I was dying because the young boy was not jumping to where I wanted him to go. On one of the sections, I had to jump from ledge to ledge. After dying five times, I turned the PS4 off due to pure frustration. The camera angles don’t help either, as I never felt the camera was in the right position for what was needed.

Trico is one of the best AI companions ever

Trico can be unresponsive throughout the game

Overall Thoughts: 6.5 out of 10 The Last Guardian tests your patience in every possible way. In the end, I enjoyed the overall experience. However, I cannot in good conscience recommend this game at its current $60 price point, due to the camera and control issues. However, if you take away those issues, Last Guardian is a wonderfully engrossing game. If you are a fan of Team Ico games, then the stated issues won’t be much of a problem. Especially, when it goes to $30. If you do not enjoy Ico or Shadow of the Colossus, than I’d say don’t even bother with Last Guardian.