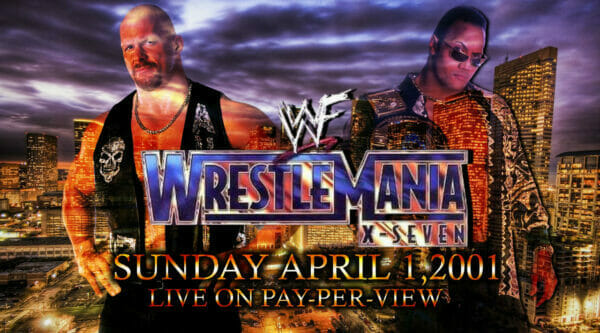 Pat Mullin and Mark Radulich present their continued look at the history of WrestleMania; The Mania of Wrestlemania 17!

On this episode we’re looking at the end of “The Monday Night Wars.” After WrestleMania 2000 ended, Austin and the Undertaker came back from injury and joined The Rock in an extended feud with the McMahon-Helmsley faction. This era also saw the rise of Kurt Angle into a main event attraction. The Dudley’s, The Hardy’s, Edge and Christian would battle each other in year long feud that would culminate in what would eventually be known as Tables, Ladders and Chairs. The Radicalz would rise to prominence with Chris Benoit in the title picture.

While the WWE was riding to untold heights, WCW was in a tailspin from which it could never recover. We’ll talk about the AOL Time Warner merger and what it meant for WCW. Plus Vince Russo’s influence on WCW’s creative, how the NWO was WCW’s greatest success and curse, Eric Bischoff and what exactly led to WCW being bought by WWE, thus ending The Monday Night War right before WrestleMania 17.

The Monday Night War Ends – The Mania of Wrestlemania 17