At this point, you could say that Bloober Team specializes in psychological horror games. Their last five games, the three Layers of Fear titles (also counting Layers of Fear: Inheritance), The Observer, and their take on Blair Witch are all fully immersed in this genre. However, each one of those games focused more on a single-person perspective and attempted to play mind games with players. With their newest release, The Medium, Bloober Team shifts towards more of a 90s style atmospheric and set-piece heavy approach. Putting the focus on its environments and its main character’s special abilities to do the heavy lifting for what amounts to an elongated Walking Simulator.

Unfortunately, neither the narrative, the simplistic puzzles, or the setting provide enough substance. The actuality of The Medium lies somewhere in the middle. Providing a lot of potential with all of its components, but ultimately at least for this game, they don’t quite hit the level of intrigue to make it a truly memorable experience.

The Medium: The Lukewarm Trip Back to a Bygone Era 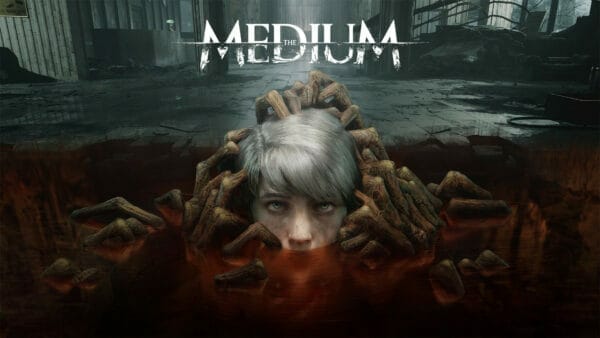 It Starts with a Dead Girl

The Medium follows Marianne, a spirit medium, who can help lost souls move on to the afterlife. After dealing with the loss of her father, in a situation that acts as the tutorial for the game, Marianne gets a mysterious phone call. On the other end is a man named Thomas. Thomas knows of her powers and would like for Marianne to go to the Niwa Resort, which was shut down after a horrible massacre many years ago. Thomas tells Marianne that he can give her the answers she has been seeking and says that she is the only person who can stop it.  Not knowing what the “it” is, Marianne, pushed by the need for answers travels to the abandoned resort.

Once at the resort, Marianne meets a little girl stuck on the other side, going by the name Sadness. Sadness tells Marianne that she is happy she has come because she wants to play, and all her friends are gone. Sadness works well as that bridge between the past and present, giving little hints of what happened before the massacre.  As the story plays out, so too does the story about Sadness and her friends.  The hardships they have all had to endure, and the reason they were all stuck in between worlds.

While exploring the Resort, Marianne comes across several notes and diary entries that help further the narrative of the people who lived there. I’m sure many will skip reading these entries, but I really enjoyed the depth that they brought to the location and are a nice topping to a well-thought-out world. Like many things in this game, the notes call back to games such as Silent Hill and Resident Evil. Where taking a little extra time and exploring each room gives out some more back story that pulls the narrative together.

Along with these notes, Marianne can find moments frozen in time.  With these, she can listen to conversations from the residents of the resort. Some of these moments bring up crucial instances in the story, while others once again add another layer to the backstory. There are also several objects that let off a light mumbling of soft voices trying to escape. Providing even more story rewards for exploration. The Medium truly excels at creating a world and backstory that slowly trickles out information for those that take the time to search it out.

All Substance, No Thrill

The big marketing draw for The Medium is Marianne’s ability to be in both worlds at the same time. Seeing her surroundings from two different perspectives and allowing for a nice change of pace as it mixes up the multitude of puzzles available in the game. This is another way where The Medium harkens back to the 90s survival horror games, mini puzzles are littered throughout every facet of the world. Most of these puzzles are extremely simple and act as a break in the storytelling, but I do feel developers missed an opportunity to add several over-the-top puzzles that really use both dimensions. There is one section late in the game that tries to change the formula a bit and adds several layers to the puzzles. However, there just are not enough of them to fulfill that need. Instead, like many parts of The Medium, the puzzles become an interesting idea that do not evolve enough to keep the gameplay interesting enough.

While going around the Niwa Resort, there is one constant baddie that Marianne runs into from time to time called The Maw, who is voiced by Troy Baker. Unfortunately, all the character does is spout off about some of the weirdest things possible and walks around in a set path. The Maw can actually kill Marianne in one hit but once you understand the set walking pattern, these meetings become monotonous. Although, things do get a little more interesting when The Maw enters the real world because his location becomes more difficult to find. Ultimately though, patience wins out in those situations as well.

Missing A Little Something

Exploring the Niwa Resort and finding out more about what happened before the big massacre is nice, but it would have been better if there was something else available to interrupt the searching. When you think back to Silent Hill, the combat may have been clunky and frustrating, but at least the combat existed. Sadly, The Medium features zero combat at all.  Marianne can get a power-up in the spirit world that allows her to charge old fuse boxes or bust away debris. It even works as a forcefield against the hordes of bugs who attack Marianne if she tries to walk through them. Thus, teasing you into believing that Marianne would gain the ability to attack The Maw near the end and finish the fight. Instead, all the action is taken care of in cutscenes and the entire game remains focused on story and exploration.

I’ve enjoyed my fair share of walking simulators, they can provide a great way to connect intimate moments using a unique perspective. However, the dual world concept that Bloober Team created in The Medium really could have used combat to showcase it in a different way. Even just a couple of battle sequences would help bring a bit more substance to having two worlds.

As I previously mentioned, Bloober Team moved away from the first-person perspective used in their earlier horror games. For The Medium, they went with an original PlayStation staple, the fixed camera angles. This lets you plainly see where to go with the camera moving towards focused areas.

The camera angles have a nice nostalgic feel for an older gamer like me, but it also brought back some of the same controlling issues from those games as well. Marianne does a little dance as the camera changes and you attempt to reorientate yourself in a certain direction. Doing this camera style allows Bloober Team to really highlight the details in the resort, both in the real world and the alternative. However, the same cannot be said for the character models, as many times Marriane appears out of focus and low grade, especially in the alternative dimension. It also serves as a stark contrast against the
beautiful set designs of the resort.

Another nostalgic move comes from Bloober Team’s decision to bring in Silent Hill music composer, Akira Yamaoka. Although the game’s sound design does a nice job of providing ambiance without music. There are times when the music plays a vital role in punctuating what’s happening. There was one moment in particular where the music just hit so well that I felt like I was right back in an old Silent Hill game.

Overall, I enjoyed the world that Bloober Team created but the rest just did not quite stick the landing as much as I had hoped. The Medium shows a lot of potential and I hope that they continue down this path and make the next experience that much better. And while the lack of combat is not really a hindrance to the game, Marianne’s abilities and the dual world gameplay could have made combat interesting.

The backstory to the Niwa Resort is fleshed out very well. However, the story told throughout The Medium felt like it was missing something. There are twists and turns like any horror game, but I felt like many of those twists were laid out to bear long before the reveal. In essence, The Medium, is the perfect Xbox Game Pass game, something subscribers can easily try out and finish in a few sittings.

Despite being wrongly hyped as the first Xbox Series showcase title, I enjoyed my time with The Medium and would recommend it to anyone who likes a bit of a creepy vibe while exploring.