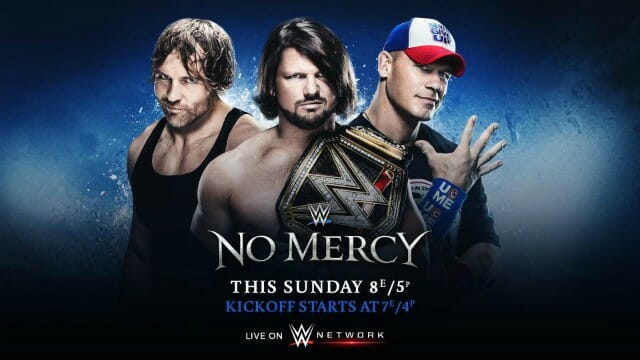 On this Wrestling 2 the MAX EXTRA: WWE No Mercy 2016 Review.

Sean and Paul are joined by Wrestling Unwrapped’s Patrick Ketza and Harry Broadhurst to discuss all things WWE No Mercy 2016. The guys talk about the weird decision to have the “main event” start the show. Of course, they cover all the matches. They cover the results. Plus, the other weird match position decisions on the show as well. They may even get into a little of the post-show Talking Smack too. So, be sure to join them for a WWE No Mercy 2016 Review.

Growing up in Chicago, Patrick has never been away from wrestling. From WWE, ROH, AAW, SHIMMER, and everything in between. He’s had at least a taste of everything. More into the Chicago indie circuit, following SHIMMER and AAW, Patrick still never shies away from making his opinions heard to all who will listen. Patrick also enjoys collecting DVD’s, which gave him the idea to start the Wrestling Unwrapped podcast where he and his co-host Harry Broadhurst audibly review DVD’s.

Harry Broadhurst is a product of Youngstown, Ohio. He started watching wrestling at the age of six and attended his first live event at the age of nine. He’s been obsessed with this psuedo-sport every since. He also enjoys long walks on the beach and busting Patrick Ketza’s stones on Wrestling Unwrapped.