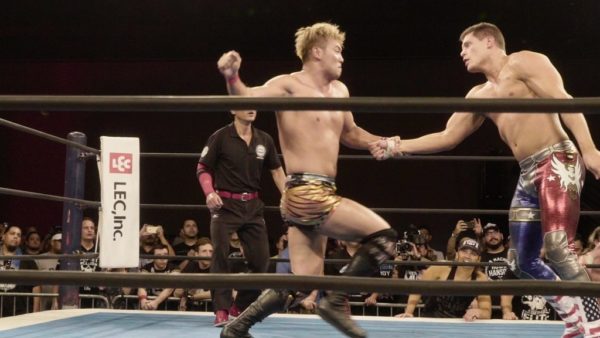 On this Wrestling 2 the MAX episode, Sean Garmer (@W2MSean) Gary Vaughan (@W2mgary) and Paul Leazar (@hailtothechimp7) come together once again to talk about the recent happenings in the world of wrestling.

First up, the guys tackle wrestling news with Quick Hits. First and foremost, they’ll talk about Impact Wrestling’s transformation into Global Force Wrestling. Smith Hart’s passing, and so much more!

Then, Sean and Paul will talk about both nights of New Japan’s historic first solo outing on US soil with their G1 Special in USA shows. Who was crowned the first ever IWGP United States Champion? Was Cody successful in his bid for Okada’s IWGP Heavyweight Title?

Then, Sean watched Slammiversary, and he’ll give us his thoughts on all of the title mergers, and big matches that took place on the last show with “Impact Wrestling” at the top of the poster.

Finally, Paul and Gary will review the latest episode of Ring of Honor Television. It’s the first episode to feature content post Best in the World. What’s in store for us now that Cody is the man with RoH Title?

We’ll talk about all of this, and so much more on this episode of Wrestling 2 The MAX.