When the first Watch Dogs came out, I was a moderate fan of it. I appreciated the game world, most of the hacking elements, and diversity in how you could approach a situation. However, the graphics. The story. And dear god, the characters, were in shambles. My hope for Watch Dogs 2 is that Ubisoft can do the same magic they had from Assassin’s Creed 1 to Assassin’s Creed II. Turning a skeleton of an idea into a fully fleshed out game. I don’t think they succeeded on that level with Watch Dogs 2. Especially since there are some odd decisions in the game. But on the whole, Watch Dogs 2 is a definite step forward in the right direction for the franchise. 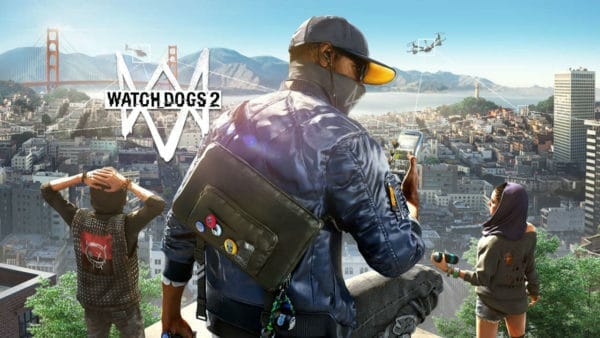 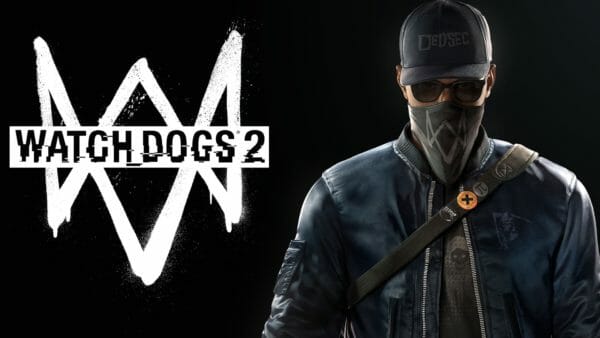 As opposed to the dour, self-centered prick you played in the first game (Aiden). In Watch Dogs 2, you play Marcus Holloway, a generally friendly African American hacker who falls in with DedSec. He joins up with them after running afoul of the ctOS 2.0 system, that runs security and predictive algorithms of the people in San Francisco. Among your crew, is Sitara who is sociable and sarcastic. Josh who is highly intelligent but has a form of Asperger’s. Finally, there’s Wrench who is a bit of an anarchist and wears a LED mask.

This is all countered by the bad guy, Dusan Nemec, who is an agro and smarmy Silicon Valley guy. Right off the bat, this narrative helps because it leads you into getting actually interested in the characters. The first game introduced characters without any thought and had them undergo almost no narrative change. This game at least has a hook for you to jump into and a group of characters you’ll want to enjoy interacting with. 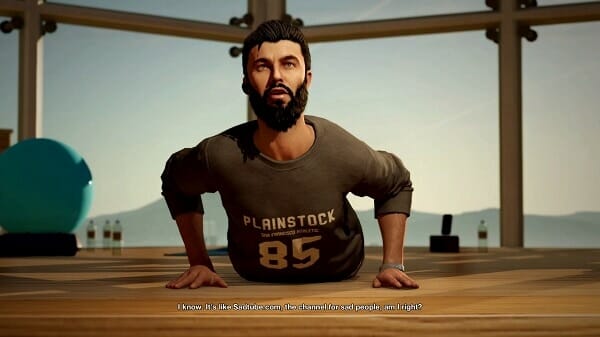 It is extremely weird to write this, but the gameplay of Watch Dogs 2 is both better and worse than the previous game. The gameplay systems in WD2 are certainly cleaner than the first game, but it’s not anymore “fun” than the last one. If anything, I think certain parts of the game regressed in some odd ways.

Hacking in the game starts off incredibly slow, with most of your fun skills buried in the skill tree.  Once you get them unlocked though, the hacking feels more important than in the first game.  You’ll be cracking open doors. Busting steam pipes. Disabling robotic guards, and more, in no time with the power of your phone. 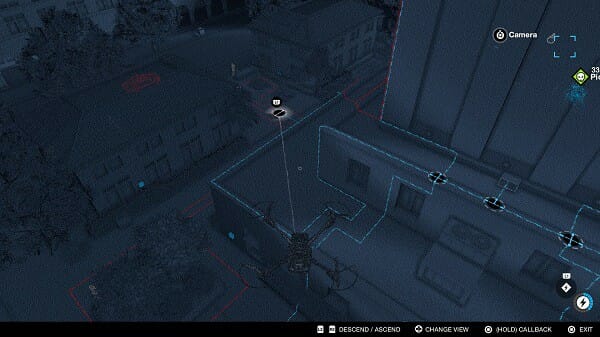 Hacking is aided by the two biggest additions to the game, your RC car and an AR drone.  Both have their specific uses, but this can be expanded on the more you unlock with the skill tree.

The AR drone flys around a certain radius with your character.  It can tag enemies. The drone does wireless hacking on people and equipment. Once you unlock the ability, it also drops bombs on targets. However, it can’t do any physical hacking. If a switch requires Marcus to actually be there, it isn’t equipped to do it.  When you come into a situation like that, you have to bring in the RC car. 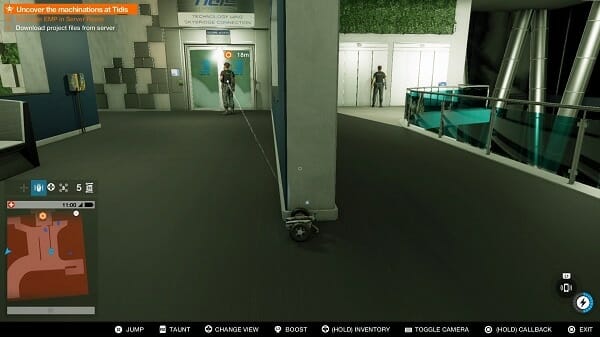 It’s hard to imagine, but the RC car is actually more versatile than the AR drone.  The car can do wireless hacks. It can also do most of the physical hacks you’ll run into as you play the game.  The idea is that to gain network access to a building, the car (or your character) has to plug in a little device into a red box to open up the network.  Considering how fragile you are (I’ll get into that later), it’s much easier and safer to just send the car to switch on the box.

The car can also leave bombs for enemies. Not to mention, jump into the air to pick up items, which the drone cannot do.  This “picking up items” thing is rather useful since you’ll run into a lot of scenarios where you can’t reach an upgrade point.  The car is given to you at the start of the game, but you have to buy the drone from your HQ. 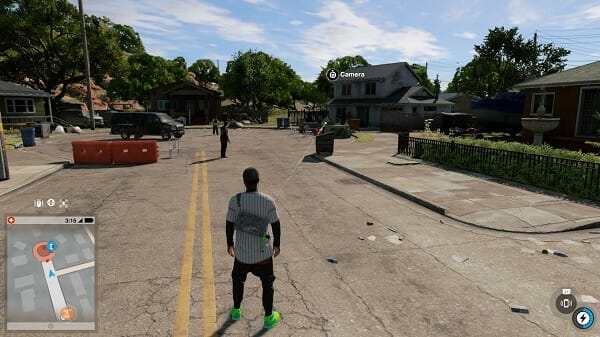 Driving around San Francisco in WD2 feels better than the streets of Chicago in WD1.  Cars are more responsive and faster, even a garbage car is passable to drive. Especially once you unlock the “turbo boost for any car” option in the skill tree.  If you don’t like driving though, fast travel is unlocked from the start.  However, you can only fast travel to stores or side activities (like racing.)  In an odd omission, you can’t fast travel to mission start markers.  Instead, you have to fast travel 100 yards away at the coffee shop. Then, you either run or drive to your mission.

Marcus can also jump and do limited parkour in this game, which is helpful.  Aiden in the first game could barely make it over a street curb.  You don’t have the free climb abilities of a hero from Assassin’s Creed, or even a Far Cry game, but you are able to jump up and down dumpsters at least.

Design for the core story missions is also pretty solid overall.  A lot of them have their own specific architecture or location. Plus, some have random gameplay hooks, which make them interesting.  One mission involved breaking into a satellite lab and using a large gantry and trailer to avoid detection. While also trying to get to specific areas.  Another mission involved breaking into a rival hacker’s lair and disarming bombs before they blew up.  So, the actual story missions have good gameplay mechanics, which can really create a challenge on how you want to approach them in the game.

I stressed above “core story missions” for a reason. Mainly, because most of the side missions are entirely superfluous.  None of it is truly bad, but so much of it feels unwarranted. It comes off as extra padding and almost none of it actually goes anywhere.  For example, You can harass a Martin Shkreli-like pharmaceutical CEO in a side mission.  You get “fans” (this game’s experience points) for doing side missions like this, or with the photo hunt mini-game. However, you gain vastly more experience just by doing the story. Instead of bothering with most of the piddly side missions. 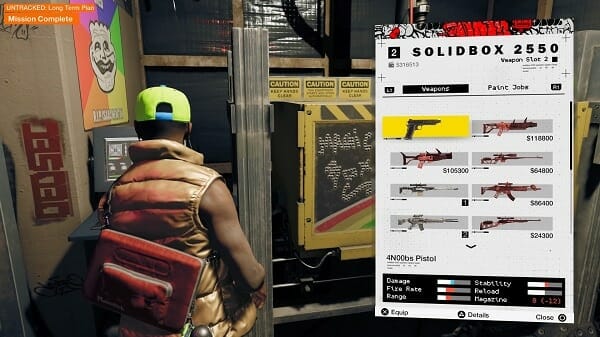 Combat in the game is a real chore.  It starts off easy enough, but Marcus doesn’t have a ton of health on him. So, in any direct fire fight, even when using cover, expect to die often.  You can try to use a stun gun if you want, but guards can be woken up so it’s best to use a pistol.  For the majority of the game, I used a silenced pistol and a silenced assault rifle and could breeze through most encounters if I wasn’t spotted.  I later switched out my pistol for a sniper rifle. It became utterly hysterical because enemies couldn’t find me at all.

However, don’t expect to be able to customize weapons, cars, or anything. You can pick paint jobs for weapons and cars, but that’s it.  The lack of customization is honestly appalling. I don’t care about adding a Dedsec skin to my weapon.  I DO care about adding a silencer to my sniper rifle so I don’t get hassled.

The system doesn’t need to be as complex as in Army of Two or Call of Duty games. A few options such as: attach a scope, a silencer, or a grenade launcher would be extremely helpful.  While you do find guns in the world, the main ones you’ll use have been 3D printed in your HQ. So why not have an option?  There is one hacking perk, which give you a turbo boost, but more variety would be welcome. 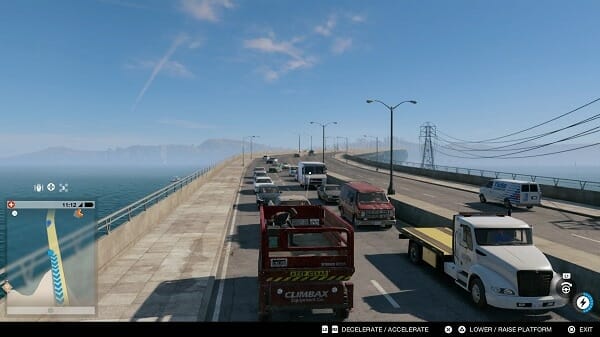 It’s also pretty telling that the vehicle I used most in the game, was a window washing lift.  I’m not saying I used it like 20%, and every other car 80% of the time, no I used the lift for about 70% of the entire game. Blocking up traffic on the Golden Gate Bridge as I puttered down it.

Why did I use it so much?  Because it allows you to bypass most of the parkour in the game.  I said above that the game had a parkour system, but what I didn’t say was that it was a good one. It is far easier to just use a lift to get on top of a house or building, than to try and climb your way up it.  Fair warning, you will be climbing a ton of buildings in this game. Due to collectibles like money stashes, paint skins and upgrade points being sprinkled throughout the city.

One slightly annoy activity in the game is the selfie/tourist part.  You’re notified by your phone that you might be close to a landmark. A landmark can be an actual place or a unique NPC.  Photographing places is usually fine. However, photographing people can be annoying since they have set paths.  For example, to photograph an Alcatraz guard, it has to be during business hours, or a guy dressed as a crab might be walking around instead.

One last thing I’d like to mention is some of the racial politics in the game. Marcus is an African American guy, but it’s not made a huge part of the game. Unlike with the mixed protagonist in Mafia III.  The only time it’s really commented on is during a mission when you have to break into a Google-like company called Nudle.  You and another African American guy named Horatio, a member of Dedsec, get off a Nudle bus and he tells you that they should separate a little.  Marcus asks why, and Horatio replies that it would look like two African American guys are planning something.  It’s a minor thing in the grand scheme of the game, but it was a nice snapshot into the good writing in the game.

Marcus is a very good protagonist

Parkour system is half baked

Combat is a chore due to low health

Multiplayer is pretty much pointless

Overall Thoughts:  8 out of 10 Watch Dogs 2 isn’t a quantum jump in quality like Assassin’s Creed II was back in the day. However, it’s still a very solid game.  Roaming around San Francisco can be fun. Especially because the world is a vibrant and colorful place.  The bare nuts and bolts of the gameplay are better than  Watch Dogs 1. Although the side content is largely flat.  Still, the core of the game is very solid with Marcus and his crew being likable characters.  Lastly, make sure you have a copy of Hackers playing non-stop as you go through the game, as it will surely help with the experience.

Supplement:  This is a short video I took in the game and might be some of the most baffling AI I’ve seen in a game.