I got into Windjammers via Giant Bomb. The guys there looked to have a blast playing it, which eventually led to the game netting its own port to PlayStation Vita and PlayStation 4, which I reviewed many years ago.  Well, Dotemu is back, with a whole new sequel to the original game. It’s interesting, to say the least but there are one or two decisions that are a bit questionable. 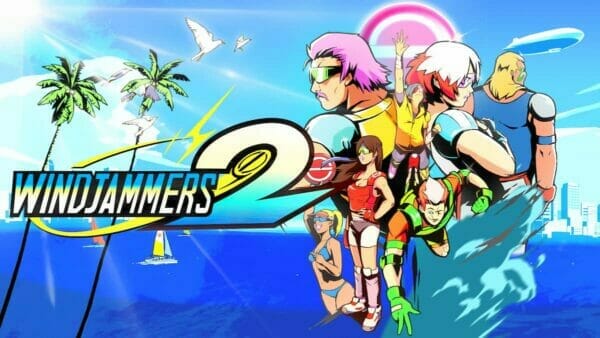 Windjammers 2 has been a long time coming.  Heck, the original Windjammers originally launched in 1994 but the modern ports only came out in 2017. Over the past few years Dotemu has gone from just porting over old games to developing and publishing new ones, Street of Rage 4 and the upcoming TMNT: Shredder’s Revenge to name a few.  Unlike with those games, Windjammers 2 is wholly their own developing effort.

Windjammers is essentially a sports version of something like Pong, which is ironic since Pong was based on table tennis.  Unlike Pong though, Windjammers is based on an actual sport, so you have two players on a field with a flying disc as the object that is bandied about. You are trying to protect your goal zones of either 3 or 5 points from the enemy shots, while also trying to get the disc when you have possession of it

The core fundamentals of the original Windjammers generally apply here.  I’m talking at least 80 percent of the original’s gameplay is represented here.  You move with the left stick, shoot and slide with X, still can make curved shots with directional inputs, lob (overhand toss) the disc with circle, and you can still do charged shots by standing under a popped up disc and waiting for it to fall.  This is all the same stuff from the last game and hey, if it ain’t broke, don’t fix it.

Except they did try to fix it

Dotemu did add some new mechanics to the game and I’m iffy on them.

One of the better ones is the Slap Shot. You do this by pressing square just before catching the disc and it’s a very quick reflect back.  It’s different than the typical reversal (by pressing X) because of its speed. It makes for a fun gameplay mechanic because you’re not sure what the opponent will do, or what you’re going to do with the disc coming at you.

The befuddling new change is that you can jump with triangle. Well, really, you can jump at any point but it’s only useful when the disc is actually under you.  When you jump up to catch the disc you can press a face button to shoot it back down.  Only, it is pretty wonky.  It either slams down on the other side for a measly two points, or, more often, the opponent catches it and rockets it back to you.  This jump/smash thing is really only for very situational moments and unlike the Slap Shot isn’t likely to be used in a full rotation.

I’ll give Dotemu the benefit of the doubt and say they borrowed the jump thing from a game called Crazy Power Disc Perfect, as you might surmise a game with a totally legitimate English translated title. Disc Perfect was a Windjammers clone made by some Japanese company called DONGURI.  Disc Perfect had jumping but it was generally more useful since the disc would roll forward and not land with a dull thud.

Another thing borrowed is that of the power meter. In the corner of the screen there is a power meter for the player.  It goes up incrementally after every possession, if you get scored on the gauge goes up more but if you score it only goes up a little.  Once it’s full, you can press X and Circle (or R1) to pull off a Power Disc (super move).

The Power Disc lets you do a flashy attack that generally guarantees a score but your opponent can still block or counter it if they are good enough.  The disc flies toward you and you press R1 when the gauge is full, this pops the disc into the air, letting you stand under it to charge.  Once it lands, you shoot the disc off into a wild and unpredictable shot, though every character has their own unique shot.  Disc Perfect had a similar system but with some really whacky mechanics like splitting the disc into three and much more extreme things.

The original Windjammers had this idea, of “super shots” essentially, but they were just the charged shots.  While you still do those here, this mechanic is much more of a catch-up move to give you at least a fighting chance.  It’s akin to you getting the blue shell when in last place in Mario Kart, it’s the game’s way of trying to make it a bit fair.

Online generally works, at least in the matches I’ve played. There’s no lag, which is very key, since this game requires some split second timing and reactions.

It’s good that the online play works since there really isn’t a whole lot else to this game. The arcade mode is basically five matches, with two mini-games (disc deflecting and the dog one) breaking up the pace after the second and fourth match, respectively. Each character does have their own kind of goofy, barely-animated ending once you beat arcade mode, that is pretty akin to the Divekick endings. But really, that’s it.

I actually kind of dig the look of this game a bit. It does away with the old blocky/angular graphics and is much cleaner and more fluid.  This obviously isn’t a graphical showpiece or anything but everything looks clean and sharp.

The soundtrack is fine also, though the main menu theme can get annoying if you have to keep listening to it. There is a really great/terrible rap song for the Junkyard stage, which is hilarious.

The last thing I’ll touch on is the best stage in the game, the Casino stage. Every level has a gimmick, either different sized scoring goals, or bumpers to ricochet shots, something along those lines. The casino level’s gimmick is it has no set point totals. After every play, there’s a dice roll done that will determine the points of a goal.  It goes 1-3, 5 and finally 8, with eight obviously being a bit more rare than two. So it becomes kind of a meta-game of trying to save your super move for when the stage has a five or an eight point total, rather than one or two.

Windjammers 2 is a fine enough game but it would’ve been nice if they really tried to break the mold some.  The casino level is superb and the Slap Shot counter is fun but it’s just not enough for long stretches of play, aside from the online.  The game would’ve been helped by basically having a “classic” mode, which is the traditional form, and then a “remixed” mode which added even more crazy stuff, but it doesn’t. So it’s in a weird half-step of having a few new ideas but some of them aren’t fleshed out enough.