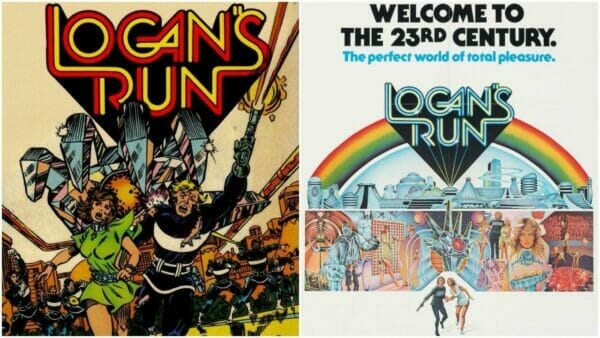 Logan’s Run (1976) is an American science fiction action film directed by Michael Anderson and starring Michael York, Jenny Agutter, Richard Jordan, Roscoe Lee Browne, Farrah Fawcett, and Peter Ustinov. The screenplay by David Zelag Goodman is based on the 1967 novel Logan’s Run by William F. Nolan and George Clayton Johnson. It depicts a utopian future society on the surface, revealed as a dystopia where the population and the consumption of resources are maintained in equilibrium by killing everyone who reaches the age of 30. The story follows the actions of Logan 5, a “Sandman” who has terminated others who have attempted to escape death and is now faced with termination himself.

Marvel Comics published a short-lived comic book series, which adapted the movie’s story and briefly continued beyond it until the book was cancelled at issue #7. The first five issues were illustrated by George Perez, whom we are celebrating as part of the Super Blog Team UP.

Make sure to check out all of the other great Super Blog Team-Up contributions celebrating George Pérez:

In My Not So Humble Opinion
I-BOTS from Tekno Comix
https://benjaminherman.wordpress.com/2022/01/20/i-bots-from-tekno-comix/

*51
JLA/Avengers: It Had to be George
https://asterisk51.blogspot.com/2022/01/jlaavengers-it-had-to-be-george.html