Anytime a racing game comes down the pipeline I’m usually the one to take it because I have the most experience, I generally like them, and I can point out stuff others might not see. So, of course, I was handed WRC 9 FIA World Rally Championship to review. And while I can say it’s a good game, it is decidedly not the racing experience I look for. 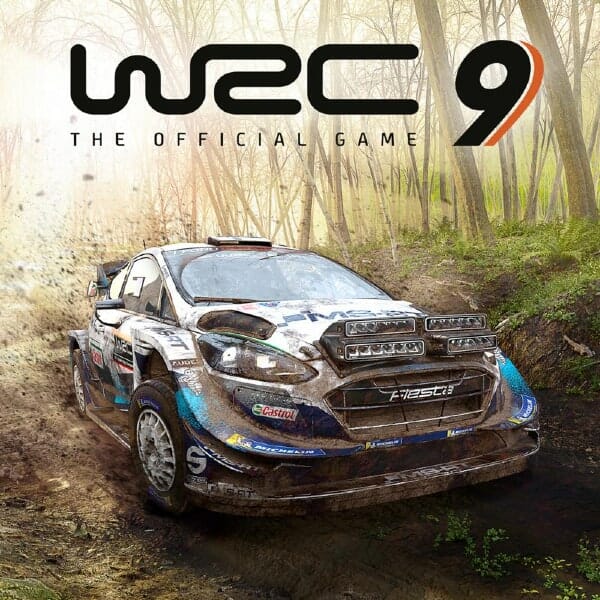 Honestly, this is going to be a fairly short review.  WRC 9 is competently made, has some cool PS5 features, and is generally a decent racing simulation.  The problem is, it’s a racing genre that I’m not a huge fan of and I find kind of tedious.

WRC 9 only has Rally racing for 95 percent of its entire gameplay loop. There is another race type, but Rally is almost all you’re going to see.  At least the races are on a variety of different surfaces and weather types. So you’ll traverse rain-soaked Kenyan paths to the blizzard-like conditions of Sweden to sunny asphalt in Japan, and more.

Quite simply, Rally racing is about getting to the end of the route. It is basically a time-trial of you against the clock. The goal is to try to get to the end of the path as quickly as possible. There are no other cars on the road, it’s just you, all on your lonesome. Each route is divided into five sections and the only way you can even see how well you’re doing compared to another racer is by completing a section. A pop up appears with a quick time to show how behind or ahead of the next racer you are.

As with the recent Dirt games, WRC 9 uses the 1-6 turn system, which I’m sure has a name but I don’t know it. Basically, a 6-turn is extremely mild, 3 is somewhat average and a 1 turn is basically a hair-pin (extremely sharp) turn.  So, your co-driver will say “Right, turn 5” and you’ll know need to make a right turn with a low difficulty soon.

However, WRC 9 goes a bit crazy. Going completely overboard with terms, which only a real Rally fan would know or understand. This is an actual line from your co-driver said during a race, “And right five short over crest into left four tightens three eighty.”  WHAT THE HELL DOES THIS MEAN? WRC 9 doesn’t even bother to introduce concepts to new players either. There is a training mode but it doesn’t actually teach you anything. All it is, is you racing your car on a track with maybe a few obstacles and that’s it.

The Other Race Type

I said above that Rally makes up about 95 percent of the racing you’ll do. The other five percent is racing against another single car. You and another car will be on a road track with a wall separating you. Then, you race on one path before gradually shifting over to the other path, while the other car does the same thing. Think of this as a kind of slot-car race track, and you’ll get the idea. Even though there is another racer on the track, this is basically a glorified time trial.

Every so often you’ll have to do a Rally Championship. This breaks down into you doing two races, you are given 45 minutes to repair your vehicle, and then you have to do two more races. The 45 minutes lets you repair the engine, suspension, bodywork, etc. You can also just replace certain items like the headlights or bumpers if they are too damaged. Doing a headlight swap might only take 4 minutes, but bringing your gearbox up from 52 percent to 100 percent might take a half-hour.

If your car is really messed up, you can opt to go over this 45-minute time limit. This incurs a time penalty during the race though, so you have to weigh the options of how much you want to repair versus how much time you want to spend doing it.

No Rewind, No Relaxation

Like with other simulation rally games, there’s no Rewind or Flashback system in place. So, if you make a mistake, you can either restart the race or respawn your vehicle on the track for a time penalty. This is an OK solution? I’d still prefer Rewinds or Flashbacks. You could gate them behind the difficulty system, or make them purchasable content for a race. Some of these races are fairly long, so messing up 5 minutes and 45 seconds into a 6-minute race can be fairly depressing.

I actually dug the management sim of WRC 9. You run the team and can hire/fire employees. They fit into categories such as Mechanic, Agent, Engineer, Physical Therapist, etc.  People range from being barely competent and cheap to being highly skilled but costing a lot of money.

The only thing you really have to worry about is exhaustion. If you race a lot, your team members will get tired and be unavailable if they get too exhausted. You’ll have to take occasional rest days to recharge them or swap them out for another employee if they fit the bill.

I understand this concept but the game doesn’t really go depth about this. It wasn’t until I started writing this review that I realized that the icons at the bottom of the screen dictate your employees’ health. The less the icon is filled, the worse off they are. It was also unclear that each employee has a ranking like the Mechanic has “REP” and “REL” with some numbers. Although It doesn’t say that these stand for Repair Speed and Car Reliability.

As for actual Management, you are basically given a calendar and you dictate what you want to do. You can do training, general races, historic races, manufacturer tryouts, rest days, etc. Generally, you are given three options for what you want to do per day, then you go do it.

You actually have a skill tree in the game and while it’s a bit overwhelming, it’s kind of hilarious and awesome it’s even there. There are four parts: Team, Crew, Performance, and Reliability.  Team helps mitigate fatigue and boost morale. Crew helps you gain more experience and improve team members’ effectiveness. Performance improves overall car handling and general performance.  Finally, Reliability reduces wear and tear on your car or improves the weight of your car.

Team morale is kind of a nebulous system in the game. Basically, when you win, your team morale goes up and when you lose, it goes down. This part makes sense but I would have rare instances where I would win a race and my morale would go down and then I would have no idea why. There is no mention that I should have lost the race, or what I did wrong so I was left confused about this system.

Likewise, you have a relationship with a car manufacturer. This is more or less the same thing as the Team Morale, it goes up when you win and down when you lose. The small difference is, you can do Manufacturer Tryouts for different companies. For example, even if I’m with Ford, I can try out for Porsche. If you win that challenge, your relationship with Porsche gets better, but the one with Ford, with who I was signed with, goes down. This at least makes a bit more sense than my Team Morale going down randomly.

Also, you have objectives as you progress. They break down into short-term, medium-term, and season objectives. Short-term ones are things such as: “Don’t spend more than 35 minutes repairing your car during a rally” or “Earn $20,000 within 4 weeks.”  Medium-term ones are longer and maybe a bit more complicated.  “Do not let morale drop below -4 for six weeks” or “Do two rest events within six weeks.”  Finally, season goals are the longest and for example, include “finish the season with a rank of 5 or higher by the end.”  Completing objectives nets you money, experience, and Manufacturer Reputation.

Road and weather conditions are felt more on PlayStation 5, which can dramatically affect the way your car drives around.

However, the major PS5 enhancements here are with the controller. When your car goes off-track, the speaker comes alive with sounds of pebbles and twigs you are hitting to denote you’re off course. Also, when you are just racing you can hear the gears shift up and down via the speaker, and the backfire through the exhaust system too.

Haptic feedback is another thing entirely. In a sense it’s great, the controller definitely fights you if you try to brake too hard with the trigger locking down and rumbling hard. You really feel that and can hear it. The problem is, it’s almost too strong. I can’t play this game for really long stretches because my hands will start to ache from the controller fighting me. The trigger stuff is fine, but I’d suggest you turn down the vibration in the game by at least half.

One last thing I’ll touch on is that there is a real, distinct, lack of music in this game. There’s some light music in the menus, or when you are repairing your car but that’s it. When you’re actually racing, you get nothing. I get why they want to do that, a loud song might distract you from your co-drivers instructions but by not (really) having music in the game, it makes for an extremely sterile experience.

Likewise, there aren’t a ton of fans or pedestrians around either. There are some but not as many as you might expect. And they are all silent, you never hear them cheering or taking pictures or anything. It just kind of adds to the overall empty feeling the game has.

This game was reviewed using a digital code provided by the publisher.

Unfortunately, this game wasn’t what I was expecting. I highly dislike the racing events that are available in the game, and the solitary experience of it all doesn’t help either. I’m sure Rally racing fans will absolutely love this game. Aside from the haptic feedback being too much at times, the PS5 additions are pretty cool. WRC 9 is a solid rally racing game and fans of the genre will enjoy it.