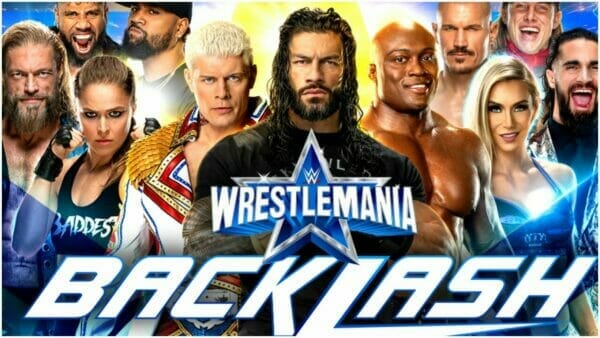 The 2022 WrestleMania Backlash was the 17th Backlash professional wrestling live event produced by WWE. It was held for wrestlers from the promotion’s Raw and SmackDown brand divisions. The event aired on pay-per-view (PPV) worldwide and was available to stream through Peacock in the United States and the WWE Network internationally. It took place on May 8, 2022, at the Dunkin’ Donuts Center in Providence, Rhode Island. This was the second Backlash held under this name after the previous year’s event, thus officially renaming the event series as WrestleMania Backlash. It was the third Backlash held at Dunkin’ Donuts Center after the 1999 and 2009 editions. The concept of the event was based around the backlash from WrestleMania 38.

Six matches were contested at the event. In the main event, The Bloodline (Roman Reigns and The Usos (Jey Uso and Jimmy Uso)) defeated Drew McIntyre and RK-Bro (Randy Orton and Riddle) in a six-man tag team match. In other prominent matches, Ronda Rousey defeated Charlotte Flair in an “I Quit” match to win the SmackDown Women’s Championship, Edge defeated AJ Styles by technical submission, and in the opening bout, Cody Rhodes defeated Seth “Freakin” Rollins. This was the first PPV to not feature a WWE Championship or Universal Championship match on the card since Elimination Chamber in March 2020.

Check out more of our WWE event reviews.