I’ve been a fan of BioShock since the original game came out in 2007, despite my laptop not being able to actually run it correctly.  I enjoyed the world immensely. The gameplay was solid. Honestly, everything about it felt like an evolution of the First Person Shooter genre.  BioShock 2 came out to a muted response. Mainly, because the basic setting and gameplay were the same. But it is a highly refined sequel to an already innovative game.

BioShock Infinite I had mixed thoughts on, even at the time it came out.  The setting is highly unique and it has an even better sense of world building than either prior BioShock game.  However, I personally don’t enjoy the shooting in Infinite. I find the entire game to be really limiting.  Well, all three BioShock games have made their way to modern consoles so let’s see how they stack up. This is Bioshock: The Collection Review. 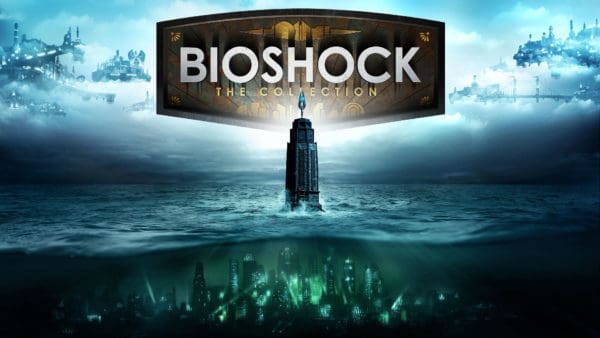 The first BioShock hasn’t aged the best, but is still a great game.  It has arguably the best 30 minutes to an hour long opening of any game, as you have no idea what is actually happening. The game also introduces mechanics like the Big Daddy and Plasmids in an organic way.  The crux of the game involves your character, Jack, as he is in the underwater city named Rapture that has been ravaged by genetic modification and an Ayn Rand-inspired villain named Andrew Ryan.  If you’re one of the four people who hasn’t played the game already, I won’t go into further details. But there are some good twists and turns to the story, which aren’t expected, even by today’s standards.

An odd thing when replaying this game is how archaic certain design decisions feel.  Don’t get me wrong, a lot of the game still feels pretty current, which is a testament to how innovative the game originally was. There are certain things that do feel dated, but not to an overt degree. For example, only being able to have your weapon or Plasmid equipped, which is a hold-over from System Shock 2, or at least hacking mini-game. 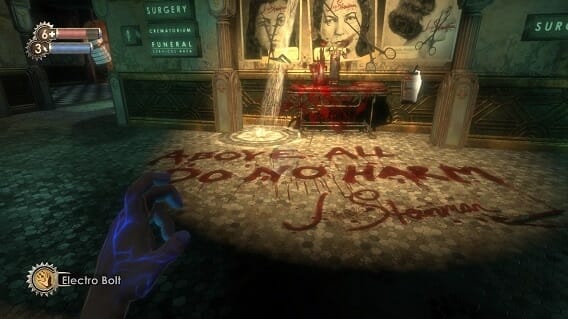 The look and sound of BioShock remain some of its strongest points.  Rapture is a wholly unique setting for a game, and nothing has felt like that, aside from the obvious BioShock 2.  The city is in immense decay with random bodies strewn about. There’s broken machinery or leaky tubes. Not to mention, the population being comprised of spliced up people who aggressively want to kill you.  The audio logs and other voice work remain as strong as ever and give a huge sense of history to the city and its people.  The architecture/visuals of the game world combined with the high quality voice/music selections give BioShock a very special feeling that most FPS games don’t even try to approach.

The True Quality of the Remaster 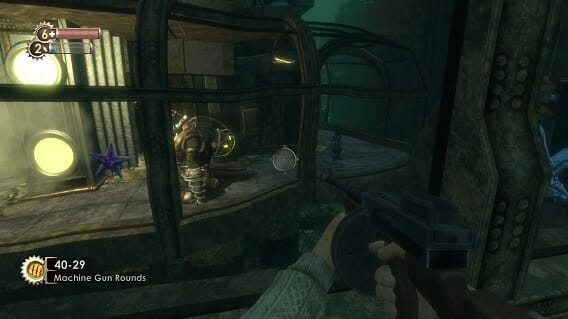 The downside, is that this collection doesn’t do much in actually remastering the visuals.  The water effects do look better and there are some slightly better textures. Amazingly, there is still some Unreal Engine texture pop-ins when game loads from area to area, or when loading a saved game.  I’m hoping they were going for an authentic feel and not just a lazy port job. Considering my experience with BioShock 2, I’m betting it’s the latter.

This will be the shortest section of the review, but not for want of me playing the game.  I frankly love BioShock 2, and think it’s the best game in the franchise.  The traps with Plasmids and your rivet gun make combat a much more strategic affair. I find the drill is a very visceral weapon to use. Also, Sofia Lamb is a greater villain than Andrew Ryan, primarily because she appears more in the game.  So, what’s my issue with the game, and why can’t I review it?  Simple, I can’t actually save my game.  I have a disk-based copy of the game and when I load up BioShock 2 and click the save option, the menu comes up with the following error. 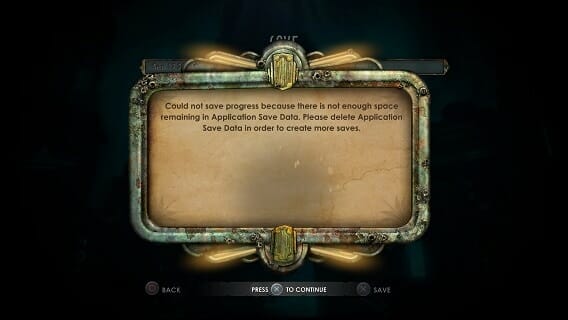 I reinstalled the game from the disk and got the same error. I cleared out the system cache and got the error again. There’s about about 40 gigabytes of free space available on my PS4. So, it isn’t that my drive is full.  I sent an e-mail to 2K about this and got no response. However, I have seen various forum chatter that some people have experienced the same issue.  I asked a friend who also has the game if he saw it and he hasn’t, but his roommate encountered the same type of issue on the PC version with a SSD hard drive.  This error also happens with Minerva’s Den, which is a bummer.  BioShock 2 deserved better, but if you want to spend between eight to ten hours playing the game in one sitting, it is completely worth it.

I have a real love/hate relationship with BioShock Infinite dating back to when the game originally came out.  I think Columbia is a great counterpoint to Rapture. Rapture is dark, gloomy and tense. Most of Columbia is a bright, sunny world, which is belied by the city’s racist beliefs and religious-based patriotism.  As a game though, I felt it was a step down from BioShock 2. Especially, on a mechanical level.

If you remove the fantastical setting, BioShock Infinite is at best a mediocre shooter.  Unlike in BioShock 1 and 2, there really isn’t any player choice in the story. This really takes away from the agency of what is happening.  Also, the reduction of Plasmids (or Vigors), the smaller amount of weapons you can carry hurt the game. Throw-in the Skyrail controls being terrible, and you have a game that’s a chore to get through.  On playing it again for this review, a few opinions changed but a lot of them still remain.

The Story of BioShock Infinite 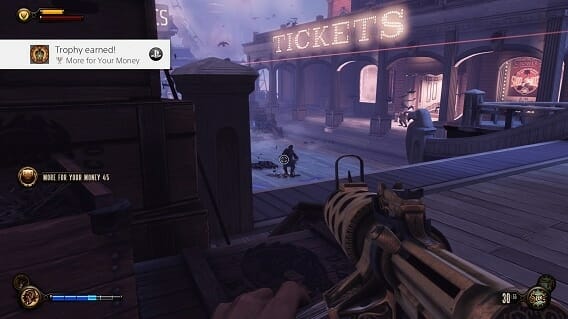 Infinite opens in 1912. Instead of starting in a lighthouse, which goes under the ocean, the player starts in a lighthouse that goes to the city in the sky. The objective in going to Columbia, is to rescue a girl named Elizabeth and wipe away Booker’s (your character’s) debt to loan sharks.  The city is headed by a religious zealot named Zachary Hale Comstock who brands himself the profit and can see into the future. He is trying to get Elizabeth back which brings you and her into conflict with him.  Twists abound in the story, like in the past two games. As the story progresses, you learn about who the character really is, who Elizabeth is, and the relationship they have with the world at large.

As with BioShock 1 and 2, there is a wealth of backstory and side characters you meet as you play.  Audio logs (here they are Voxophones) are in the city for you to hunt down to gain valuable knowledge of what is actually going on in the game.  Infinite is a lot more esoteric than the earlier games, so getting this content will aid you.  You can also find “Gear” in the game, which can slot into four spots (hat, shirt, pants, boots.) These give you passive upgrades that can tip the balance into your favor.  One gear might increase your weapon clip size by 75%, while another may let you regain health by melee killing enemies.  Don’t worry though, gear is plentiful in this game.

I said above that I didn’t particularly like the gameplay of Infinite. After playing through again for the review, I’ve changed my mind slightly.  Aside from an extremely annoying defensive fight at the end, the core gunplay of Infinite feels solid.  Enemies go down pretty quickly. Using your Vigor powers, especially the crow one, does give it the BioShock flavor. Although, I still think it’s a litle diluted to me. 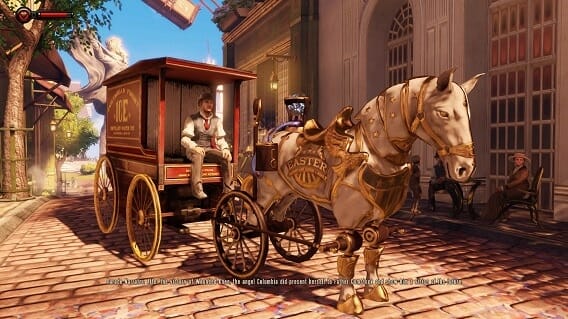 I still don’t enjoy the narrative beats of the story. There’s a lack of choice, which was present in the previous two games. Also, certain elements don’t play out well either.  One important aspect is that Elizabeth can open tears in the world to bring in stuff, or change the world around her.  This makes a late game story sequence seem extremely jarring because it comes out of nowhere. The characters also seem less realized than in the earlier games too.

The player choice part is bigger to me since it seems like a huge disconnect from the earlier games.  In the prior BioShock games, there was the binary choice of basically “Save the Little Sister or kill her to get more ADAM for your character.”  While it is a fairly naked system, it at least gave you some motivation in hunting the Big Daddies (or finding the Sisters in BioShock 2.) Thus, creating a pretend morality system in the game.

BioShock Infinite has almost none of that.  There are some player choices in the game, but they boil down to basically “Do you want to hit the interracial couple or the annoying announcer.” Another example, “which necklace do you want to give Elizabeth, a bird, or a cage?”  There are a few more decisions later on, but it’s nothing compared to the moral system in BioShock 1 and 2.

I’ve touched on the games separately, but with a collection it’s important to see how they work in one set. Quite frankly, it’s a bit of a mixed bag.  They added a few things, but nothing hugely important.

The biggest new extra here is a “commentary” for BioShock 1 featuring Geoff Keighly interviewing Ken Levine (director, writer) and Shawn Robertson (lead animator) as they talk about the first game’s history.  I have three basic problems with how they handled this extra.

Aside from this one new feature, the three games have all of their DLC addons included, for good (Minerva’s Den for BS2 and Burial at Sea for Infinite) and for bad (everything else really.)  Also, BioShock 2 is missing it’s multiplayer component but that is par for the course with these collections nowadays.

Overall Rating:  7 out of 10  All three BioShock games are fondly remembered for being some of the best games of the last generation. BioShock: The Collection presents them in an almost great package.  The new interviews may appeal to diehard fans of the games. Especially since they do give out some good insight into the making of BioShock 1. The collection itself is suited to new and returning players, and the games are still relevant in today’s world.  Assuming BioShock 2 actually worked correctly for me, this collection would get a higher rating, but alas it did not, hence the lowered score.