Dragon Ball Z Xenoverse 2 is a game by Bandai Namco Entertainment, which takes place after the first Xenoverse game. The story continues, as the hero of Toki Toki City (The city in the first game) has his or her, own statue in the new Time Patrol hub of Conton City. While they are off saving time with Trunks. Mira and Towa come back, ready to cause more trouble. Except this time they are recruiting even more powerful foes to try and change the Dragon Ball Z timeline. You are a recruit at the time patroller academy, and you are called up to help fight the evil forces at hand. 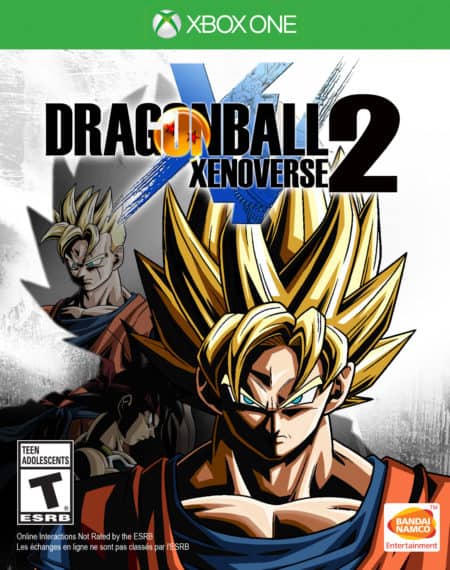 The main draw of the story is the nostalgia it brings. Fighting beside Goku and Piccolo as the first Saiyan invader attacks earth. There’s also helping to defeat Lord Frieza on Planet Namek. These are all major plot points in the Anime and Manga. The player can now experience this in their own way, as they play as their own character. The parallel stories let you team up with some of your favorite villains too, in some very precarious what if scenarios. The customization allowed to go into each character is very intriguing. While you can wear clothes that some of the characters in the Anime and Manga wore, there are plenty of new and unique pieces of gear to wear. Each of the five races in the game make sure you never have to fight the battle in raggedy or boring clothes. There’s even a type of clothing called the QQ bang, which takes over the boost given by clothing. This makes it to where you don’t have to worry about some of the negative boosts given by other clothing. However, you can flat out ignore that and focus on getting a fully custom outfit for your time patroller as well. The characters are vast in their own rights, the only downfall is the copies. For example, there are two different versions of Goku, One regular and one Blue Super Saiyan. It’s weird they didn’t just make it a transformation instead. Regular Goku has eight different outfits, some with the ability to go Super Saiyan, and some without. Several of the characters follow this same line.

Getting Into the Fight The gameplay is repetitive, but not the bad kind. It is a fighting game after all, once you get the core mechanics down, there is not much you can do different from fight to fight. Once you find your winning combo, you can use it to take you straight to the top. Until the harder level AI learn said combo, and start dodging your attacks, making you rethink your strategy. The multiplayer is pretty basic, but still fun, as the gameplay is simply better than that of the older Dragonball fighting games. Providing easy access to ones abilities and skills, a Kamehameha is never far off. Then, one can counter with your own blast or dodge and get up close and personal with your offense. Regular Ki blasts do not take up your Ki meter. So, if you have no ki and someone manages to always stay out of your range, you can bet you still have some kind of offense at your finger tips.

Moving Past the Main Modes The game focuses a lot on its story. Offline multiplayer has only one game mode, One on One, and no cooperative story at all. Parallel Timelines are side missions, which often end up being repeats with different rewards. These rewards can range from clothing, to moves, to capsules. One specific mission, even grants an awakening skill, which is a transformation that is very useful.

Once the story is done, it seems like players have little left to do. You can always start a new character or train their max level to play online against others. There are time rifts which continue to give quests after the main story is over. However, with little variation in them, they can get boring rather fast.

Introducing the Storyline of Dragonball

Overall Thoughts: 7.5 Out of 10 The game is very solid. While not the epitome of fighting games, Dragonball Z Xenoverse 2 is definitely one that hardcore fighting game fans will enjoy.

Even casual DBZ fans should find something here, as they are taken through the major points in history through their own eyes. A great game for anyone who picks it up and has the time to learn, or relearn, the history of Dragonball Z and defend it against those who would try to change it.

For the sake of transparency: Bandai Namco provided a copy of the game for review purposes.

About The Author: Austin Foncannon

Austin is a casual player who enjoys playing video games in his spare time but is sure to balance life with his game time, so he doesn't become the "best" at the games he plays but that doesn't stop him from doing his best to win each time. Fighters, Shooters, Real Time Strategies, he plays a little bit of everything. Some of his favorite games include: Super Smash Bros., Rainbow Six Siege, Dark Souls, and Tekken. Just to name a few. While he may not always be up to date on the gaming news, he is sure to keep his head level with hard facts and appreciate classics as well as newer games. Youtube Channel: Auscarsy Twitch: Auscarsy Steam name: Mymomateurs Xbox Life Gamertag: Auscarsy117 WiiU Name: Auscarsy Email: Itwasmeaustin316@gmail.com Skype: Auscarsy