Normally, I am a big fan of Metroidvanias, in fact, I’ve reviewed quite a few of them for this very website. Unfortunately, Ender Lilies Quietus of the Knights falters in the major key area that matters most.

Ender Lilies Quietus of the Knights: A 2D Game That Tries to be Too Much Like Dark Souls 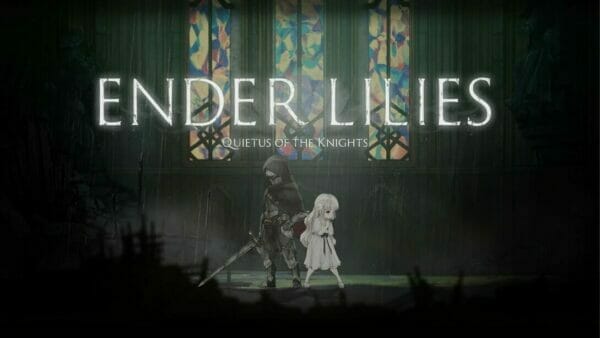 I imagine that some people will really love Ender Lilies Quietus of the Knights. It just didn’t click with me. Honestly, I also kind of grew frustrated by the general flow of the game as well. You know how there are some games that you can recognize are good, or that are better than you think but they just don’t make sense to you, or you just can’t get into them?  That’s how Ender Lilies felt to me.

Ender Lilies is basically a Dark Souls game lightly mashed together with a Metroidvania.  It’s way more of Dark Souls-like than Hollow Knight, which is a game I did dig, so the fact that I’m not a huge fan of Dark Souls probably is what makes me feel ambivalent about this game.

You awaken in the game as Lily, the last in a line of white priestesses. The priestesses have the power to cure the blight, which has destroyed the land and corrupted everyone. You have amnesia but you are greeted by the soul of a knight who binds himself to you to protect you so you can have a shot at trying to restore the kingdom.

As a priestess, you actually have no offensive capabilities. You have an evasive dodge and the ability to pray to restore health but that’s really about it.  For actual combat, you need to equip and use spirits.

When you initially start out, you only have the Knight spirit to help you, which is a basic melee soul. However, very quickly you acquire a short-ranged attack spirit and a swinging whip attack spirit. From then on, generally speaking, any time you kill a boss character, you will gain them as an attack to use right after.

Souls are basically split up in two ways, limited or unlimited. Unlimited souls are ones you can use all the time and there’s no ammo with them. For example, Your Knight attack is unlimited, or the hammer attack you gain a bit later is unlimited, these attacks are ones you can do all the time.  Limited, obviously, are ones you can only use while you have ammo for them. For example, the short-ranged spirit is limited, you only have like 18 shots with it. You also gain a melee-limited one where the spirit swings a whip around but you can only use it 13 times. This can be refilled by resting at the benches (basically Dark Souls bonfires) or cutting up red flowers you occasionally find.

One of the big problems I have with Ender Lilies is the actual combat. Now, the system they have of risk vs. reward with unlimited/limited attacks is fine and you do get a lot of options when it comes to battle since you can equip up to six spirits at once, swapping between two sets of three.

The problem is, combat itself is very lackluster.  Enemies barely react to your attacks and there is little feedback on what you’re doing.  Enemies have a health and a stagger bar but with most small enemies this doesn’t matter since they’ll be dead before they are staggered. Actual bosses need to be staggered in order to take any real damage but the amount of time you have to hit them is tiny.

On the flip side, enemy attacks can wreck you quickly and easily. You do have the combat roll at first but that’s it. Your only method of restoring health is by praying but that’s like an Estus Flask and you can only do it three times before resting or finding a white flower to restore one of the uses. You do, eventually, get a shield spirit and a counterattack spirit but the early parts of this game are incredibly rough to get through because you are so limited.

You can upgrade your spirits to be more useful, like increasing their attack damage or a number of times you can use them but this doesn’t make combat feel any better. Each upgrade takes blight (or soul) resources that you’ll find in the game world but it becomes pretty expensive later. It’s more about just increasing the effectiveness not actually adding functionality to an attack.

So Ender Lilies does have the basic framework of a Metroidvania. For example, the first boss you encounter gives you a double jump ability which lets you go back and start exploring areas you missed beforehand. A later boss gives you a downward hammer thrust so you can then go back and bust up certain floors that were weak.  So that element of a Metroidvania is present.

The genre convention breaks down where the map is concerned, though. It does at least tell you if an area is fully explored or not but that’s about it. The map is just a series of rectangles and squares that you can see the paths between but there’s no detail to those squares. At best you see a red circle, indicating a path that you haven’t tried yet.

One thing you can do to upgrade yourself is by equipping relics. You’ll find them in the various closed-off areas and they provide passive buffs for your character, like increasing spirit attack usage or increasing your HP.

These are gated by how many open relic slots you have. Relics can take up to three slots, with the more powerful relics taking up more slots.  You only start with a few slots initially but you can find items to increase the overall number.

To Ender Lilies credit, it looks pretty decent. The regular enemies are a bit boring but the bosses are nicely detailed and animate well. The game has a kind of ghostly look to it, which suits it.

The music, however, is where the game really shines. It’s not bombastic or energetic, but it is very atmospheric and moody. Light piano melodies along with some soft singing here and there. The soundtrack alone is almost worth the price of admission.

This game was reviewed using a digital code provided by the publisher through a third-party PR company.

I really wanted to like Ender Lilies Quietus of the Knights but it just didn’t strike a chord with me.  It’s well-made and I can see the general appeal but I just didn’t have fun. It doesn’t have the snappier combat of say a Hollow Knight or Ori, and there is very little feedback to enemies getting hit.  The music is great and there’s a nice sense of atmosphere in the game but it just wasn’t enough for me.