You may be asking yourself why a review for Far Cry New Dawn is hitting the site now?  After all, it is three months after the game came out and has largely been forgotten about.  Well, quite frankly, I only started playing it a few weeks ago.  My primary reason for playing it is to see if it’s as terrible as Far Cry 5.  Thankfully, it isn’t.  It’s still not a high point of the franchise but is at least enjoyable all the same. 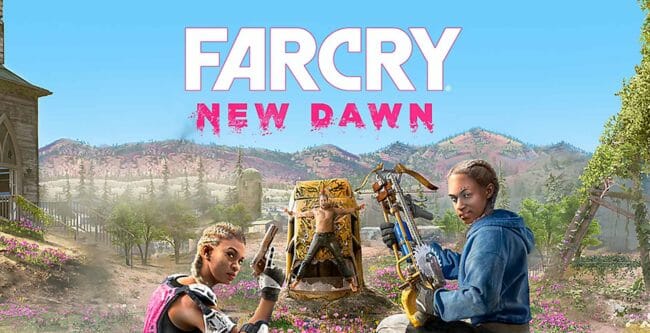 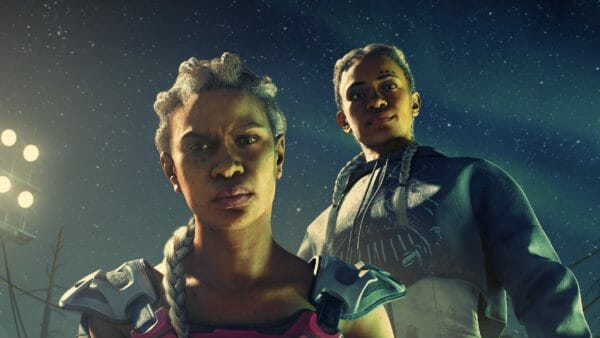 Far Cry New Dawn opens up in an odd way.  Your character this time is a security captain for a man named Thomas Rush.  Thomas heads up a group on a train that goes around the country trying to get settlements up and running again.  Someone invited Thomas and his group to Hope County where they inadvertently get ambushed by the Highwaymen gang, who ironically, are headed up by twin women named Mickey and Lou.  You get separated from the group and then it becomes all on you to rebuild Hope County, stop the Highwaymen, and rescue Thomas. 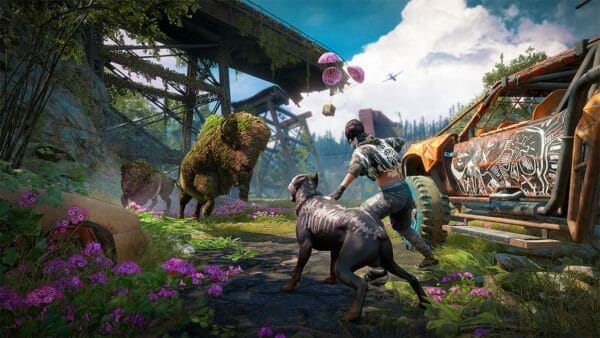 Right off the bat, a principle issue I had with Far Cry 5 rears its ugly head again.  The issue being that you don’t “have” an actual character to control.  You are simply known as The Captain, or some version of it.  At the start of the game you pick your character gender and clothes you want to wear.  As you play, you can unlock new clothes but since it’s a first person game and you only see your character during brief victory scenes, meaning that it doesn’t really matter what your character wears.

The bigger character point remains an issue though.  While I haven’t played Far Cry 1 or 2, I have played Far Cry 3 and above, and in those games you HAD an actual character.  Jason (Far Cry 3), Rex (Far Cry 3: Blood Dragon), Ajay (Far Cry 4) and Takkar (Far Cry Primal) all had a character that was integral to the plot.  Your character would respond to other characters or to events in the world.  The fact that the caveman game’s hero has more player agency than anything in Far Cry 5 or Far Cry New Dawn is absolutely bewildering to me.

One of the most annoying design choices in Far Cry 5, the Bliss Bullets, are thankfully removed from this game.  This was a mechanic where if you did too much activity in an area with one of the cult lieutenants, someone would yell “HIT’EM WITH THE BLISS BULLET!” and it would start a story progression sequence that was totally inane.

This Bliss Bullet nonsense was also game breaking.  It could literally happen if you were 500 feet in the air with a helicopter.  So, kudos to Ubisoft for removing that from the game.

Back to What You Know 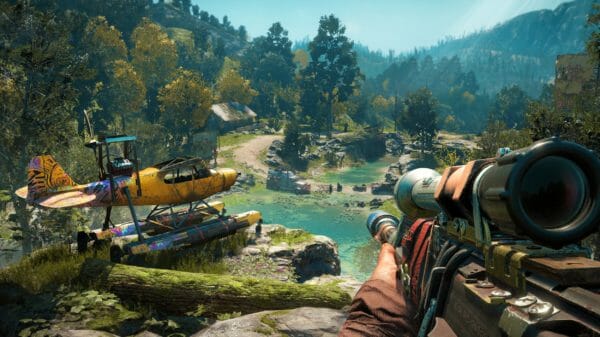 On a structural level, this game has a lot more in common with Far Cry 3 or Far Cry 4 than it does with Far Cry 5.  Truth be told, it is actually closest in-line with Far Cry Primal than any other Far Cry game, but was also probably played by a lot less people than the main series titles.

Instead of the three lieutenants like in FC5, this game sort of has nothing?  It’s a fairly linear game, at least when it comes to the main story.  There are around 16 or 17 story missions in all, with the real bulk of the content coming in the form of side missions, expeditions, and the pepper stashes that are roughly the same as Far Cry 5.

Side missions can unlock additional characters for you to summon (Heroes for Hire), and there are eight available in total.  One is an old sniper, one likes to throw bombs, one is a literal pig that can gore enemies, etc.  I think you can only use one at a time, as opposed to two in Far Cry 5, but they function the same.  They also don’t work that well, at least on the PC version anyway.  I was using the sniper one and she REFUSED to fire.  She just kept glitching out, moving to an area, aiming at an enemy, and then would move to a different area and do it again.

When I say “side mission” though, for the most part I mean either finding collectibles or completing outposts.  Collectibles are like normal but the outposts are a little deeper.

The stashes return from Far Cry 5 and are still one of the better parts of the game.  They are more puzzle-like and not really combat focused.  They usually involve you figuring a way into the bunker or storage area to get the skill points and resources/ammo that are hidden there.

A new and odd mechanic in the game is that you can go out on expeditions.  Expeditions are separate maps available for you to complete a mission.  The mission is always “find the package”, “get to the landing zone”, “wait for the helicopter to show up among throngs of enemies.”  If you survive the onslaught, you’ll get a lot of crafting materials for your trouble.  Like with outposts, you can re-do these missions with slightly different factors for more rewards. 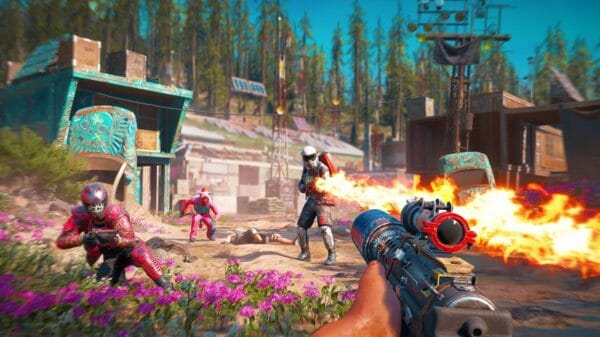 The actual strangest thing about Far Cry New Dawn is that it has almost a RPG-like system for dealing with weapons.  Weapons come in four colors, white (common), blue (rare), purple (epic) and yellow (legendary).  Yes, it does away with green (uncommon) color, but you get the idea.  Enemies also have this color system, so going up against a gold enemy with just a white shotgun isn’t going to do anything.  On the flip side, going through an enemy camp with full yellow weapons against white-colored guys is a ton of fun.

There isn’t a concept of money in this game.  Instead, to get the better quality weapons, you need to craft them from the town workbench.  In lieu of money, you need resources like metal, springs, tape, circuit parts, etc.  You can get this stuff by looting enemies, taking over camps, and more. However, some materials can only be found during expedition completions, so there’s another reason to go on some expeditions. 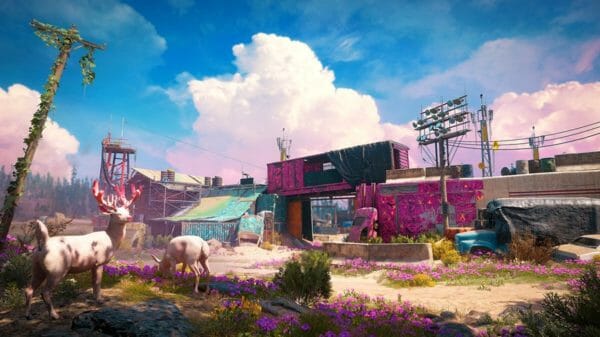 Like in Far Cry: Primal, you essentially have a home base called a Prosperity that you’ll also have to upgrade.  The town has several stations for you to upgrade. The weapon bench, garage, helipad, cartography station, and others.  Each station can be upgraded two times to permit more useful upgrades. The main town building can also be upgraded, which is what unlocks the upgrade options for the other buildings. Usually, unlocking a certain number of personnel and gotten to a certain point in the main story to unlock upgrades.

The big resource you need to upgrade buildings and such is ethanol.  This is why the enemy camps are repeatable, so you can more easily farm ethanol.  If you had to just take over a camp and get a paltry amount (150, if you’re lucky), then upgrading the town buildings and such would take forever.

Skills to Pay the Bills

An interesting mechanic in this game is how it doles out skills and your skill tree. There’s an overabundance of skill points in this game.  You get unlocks like the grapple ability, safe cracking, able to carry a third and fourth weapon, and so on.  You also can unlock five skills that are slightly more supernatural, like a double jump and a cloak.

There are a few skills that are repeatable though. Meaning, once you unlock them, you can just keep dumping points into them if you want.  These basically include doing more damage, letting you carry more ammo, or increasing your special power recharge rate.

Aside from the character stuff, I’m still not entirely sold on how New Dawn handles its story.  It is better than Far Cry 5 but that really isn’t saying much.  Pagan Min and especially Vaas were dynamic and interesting villains.  Mickey and Lou just aren’t a huge presence in the game, and they aren’t handled well either.

While Far Cry New Dawn isn’t anywhere near the best game in the franchise, it’s at least a notable improvement over the garbage fire known as Far Cry 5.  It seems more ambitious with its systems and letting the player experiment.  The story/character stuff is still the biggest hindrance though and I pray they fix this self-inflicted problem whenever Far Cry 6 rolls around.  It doesn’t have the Bliss Bullets at least, so that’s certainly a win for New Dawn.