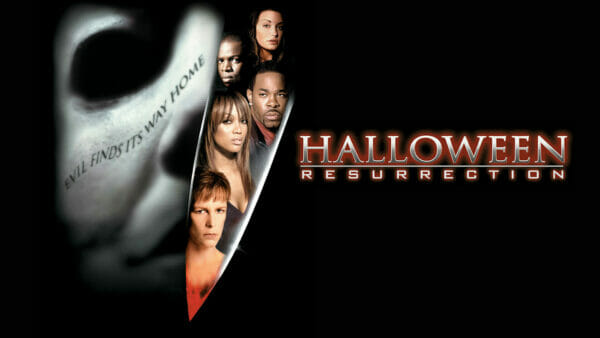 We are presenting our Halloween Resurrection (2002) Movie Review in honor of Halloween Kills (2021), the sequel to Halloween (2018)!

Halloween: Resurrection is a 2002 American slasher film directed by Rick Rosenthal, who had also directed Halloween II in 1981. Larry Brand and Sean Hood devised the screenplay. The film is a direct sequel to Halloween H20 and it stars Busta Rhymes, Bianca Kajlich, Thomas Ian Nicholas, Ryan Merriman, Sean Patrick Thomas, Tyra Banks and Jamie Lee Curtis, with Brad Loree as the primary villain Michael Myers. The eighth installment in the Halloween franchise, it follows Michael Myers continuing his murderous rampage in his hometown of Haddonfield, when his old, derelict childhood home is used for a live internet horror show.

For more Halloween movies and comics we’ve reviewed, check out our episodes on Halloween 2 and Halloween NightDance!