It is perhaps dismissive to say that Horizon Zero Dawn. is a third person Far Cry game. However, it is not entirely without merit.  Both games have deep crafting mechanics. Stealthy gameplay, things to climb and have reasons to see the world map. Plus, a ton of animals for you to hunt down and skin.  But while Far Cry, for the most part, takes place in the modern world, Horizon Zero Dawn thrusts you deep into the future where humanity is on the brink of collapse and has slowly started to eke back.  Also, the animals I mentioned earlier?  Yeah, those animals are robots.  And not like the goofy robot animals from Far Cry: Blood Dragon either. 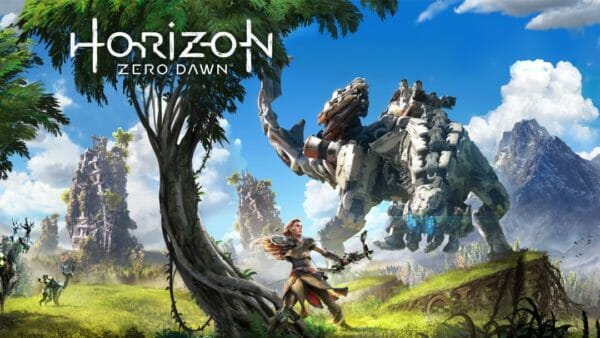 A Woman on a Quest 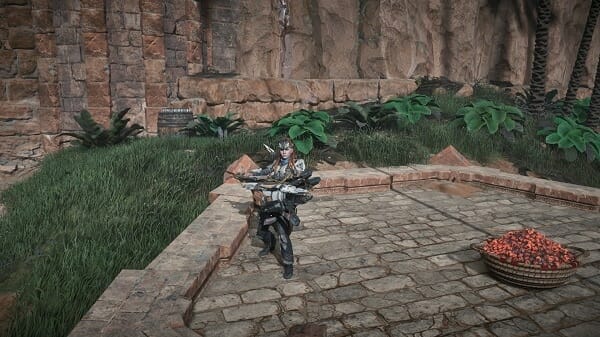 HZD has you play a young woman named Aloy (pronounced A-loy) who is on a quest to explore her past.  You begin as a child under the care of Rost, outcast from the Nora tribe.  Rost teaches you basic survival skills. Although, he is cryptic about your past.  It’s not until a few chance encounters with other tribe people where Aloy takes it upon herself to win a competition and ask the leaders of her tribe where she came from.

While training with Rost, you stumble upon an ancient ruin filled with dead bodies and metal objects. One of them you take and can use is called a Focus.  This allows Aloy to see an augmented reality display and shows that the world isn’t quite so primitive as initially thought.  Who Aloy is, what happened to the past society, and her quest to learn all come to a head in this game. 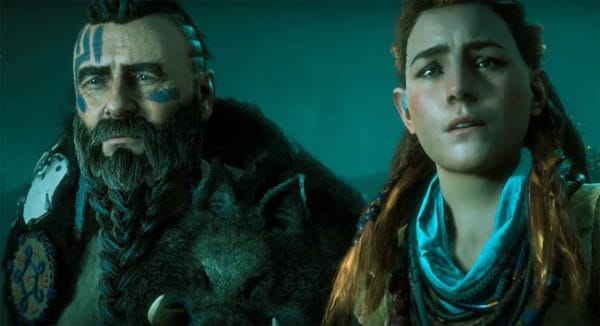 The story of Horizon Zero Dawn is formulaic if you’re into science fiction. However, it passes the bar against a lot of other video game stories. The characters are pretty interesting, from the main character of Aloy to her father figure Rost. A mysterious figure named Sylens, and there’s also a soldier you meet quickly named Erend as well. Most characters in the game have good personalities, solid voice work, and motivations behind their behaviors. The only character that gets the short shrift is the bad guy, who isn’t a great character and makes far too few appearances in the game. 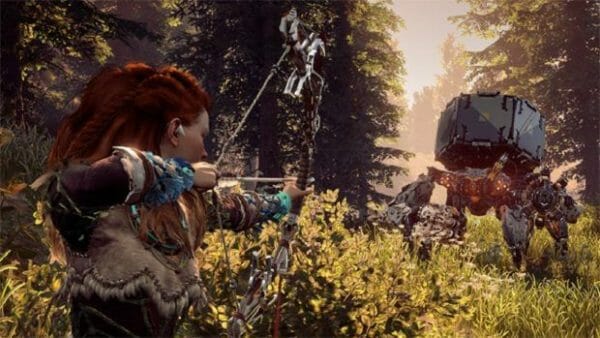 So how does it really play?  Well, like I said above, it does feel a lot like a Far Cry game, but that is a perfectly apt comparison.  Your primary weapon is a bow, and you use that to hunt down the various robot machines, human enemies, and even real animals for their resources. Although, most likely you may also hunt them if they are a threat to you.  Aloy also has a melee spear, with both light and heavy attacks against foes.

Later on, you get weapons like a Tripcaster, which allows you to set trip wires against enemies. There’s also another one called a Ropecaster, which ties down large enemies to the ground for a short while.  You also get a grenade catapult and a short-range multi-hit shard launcher. For the most part, these are the main types of weapons in HZD.  There are a few more, but I didn’t have any use for a lot of them. 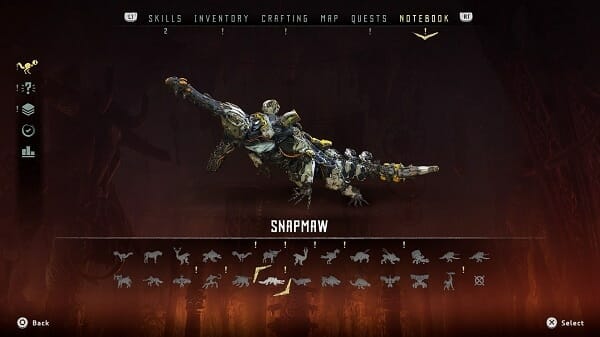 Your main foes in Horizon Zero Dawn are the robot animals.  While you occasionally fight off a bandit camp or two, robot enemies comprise about 90% of the game.  Each robot is based on a different type of animal.  A Strider is a horse. The Grazer is a deer. Broadhead is a bull, and so on.  Larger robots don’t have 1 to 1 comparisons for animals, but it gets close enough. There are even some that appear closer to dinosaurs. 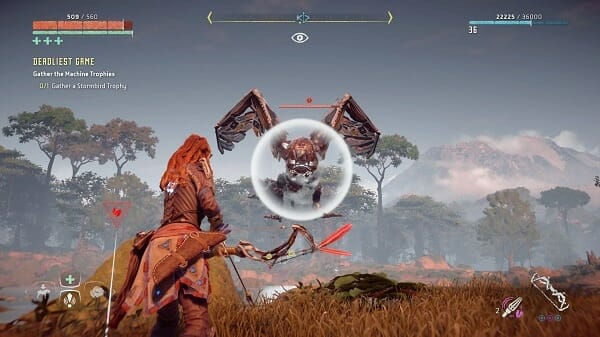 The thing you do most in the game is hunting. The humans and flesh animals are easy. A shot or two take down any animal and a headshot (usually) takes out any person. Robot animals are a different story and tend to come in three sizes, small, medium and large.  The small robots can usually be dealt an arrow to their eye-light, or taken out via a stealth kill. Medium animals can only be damaged moderately by a stealth hit, with eye-light hits causing some damage as well. In general, arrows to their head, or targeting specific weak points nets you a quick victory.

However, this all changes in large animals. They require much more tactics and planning.  You’ll want to set up traps with the Tripcaster. So that when the robot passes through the line, they’ll be damaged. Making them much easier to kill. You can also tie them with the Ropecaster, which exposes the underbellies of certain robots. Then, chip away at them with arrows.  However, the best tactic, if the robot animal has one, is ripping off one of their own weapons and using it against them.  This move is used to great effect later in the game and is not only very effective but fun as well. 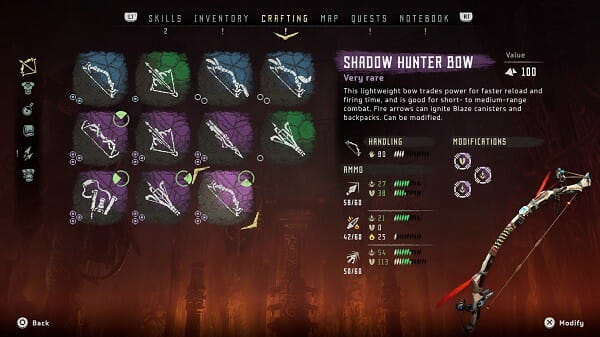 Hunting nets you valuable resources for crafting upgrades and gear. You can either equip them on Aloy or sell them to merchants for new items.

The only upgrades you craft for Aloy are upgrades in how many things she can carry with her. This can vary from more quiver space for your arrow. Perhaps, you’d like more ammo space for the Tripcaster. There’s also the chance you need more space to hold animal fat too.  There are usually three or four levels of upgrades and they incrementally increase your capacity, like instead of holding 20 arrows, you can hold 30.

These upgrades require both basic supplies (metal shards, branches, and wire) or animal parts, usually skin or bone. However, it can take some time and/or luck to gather the materials. There’s also the option to craft “on the go” as you walk around, or during combat scenarios.  You can create ammo for your weapons in a quick select menu, but other crafting items like potions have to be done in a separate menu. 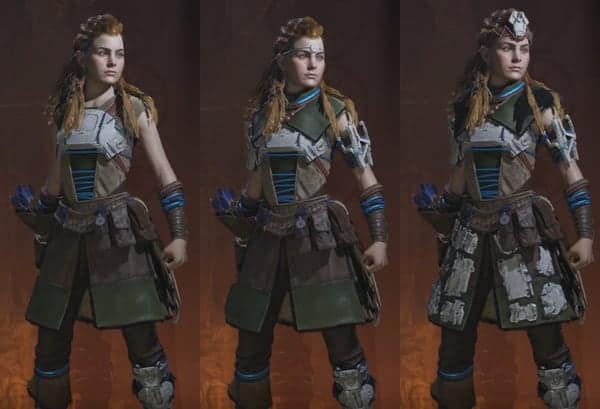 Most of the time, you acquire new weapons and outfits by buying them from merchants. Merchant gear requires metal shards, the currency of Horizon, as well as machine resources, like luminous braiding, or a machine lens. Horizon Zero Dawn isn’t as loot-driven as say a Diablo or Torchlight, but there is a loot breakdown like in those games.  It follows the usual gear quality of green (common), blue (uncommon) and purple (epic) formula.  The gear quality correlates to how much damage a weapon can deal. How much damage an outfit can withstand, or how many modification slots it has.

Mods can have a variety of effects, depending on what type they are.  Weapon mods generally focus on increasing damage or adding elemental effects to the weapon.  Armor mods factor into increasing your damage resiliency or increasing stealth. 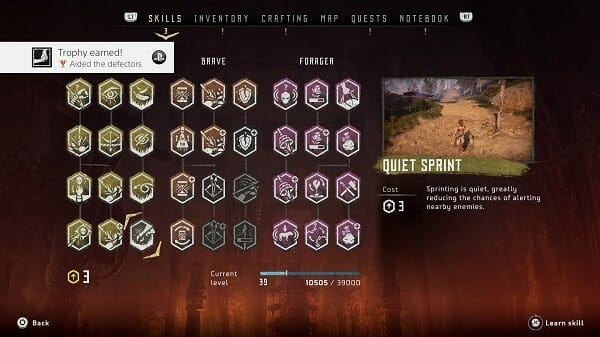 As you complete quests and kill enemies, you’ll accrue experience points which gets you skill points.  The skill tree has seven paths to follow but isn’t that overly complicated.  The first skill requires one point, the second two, and the third and fourth skill requires three points each.  Some skills are vital, like the aforementioned “stealth kill,” or “slow down time while you’re aiming” skill. However, others, like the “quiet sprint” skill aren’t entirely necessary.

One important skill to grab though is the “Override” skill. This one is initially locked by story progression but is very useful.  It allows you to turn a robot from an enemy into an ally, with further upgrades lengthening the time it remains with you. 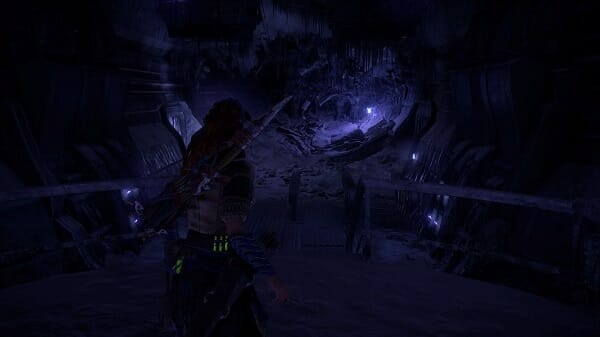 One of the small pitfalls of HZD is the lack of mission variety.  Story missions are a tad more intricate but most missions boil down to “follow the glowy path”, “examine an area” and eventually “kill all enemies in an area.”  Granted, most missions in all games, boil down to these general concepts. Although, it seems like they could have done more here. Story missions can have a few more restrictions, like having to be stealthy or doing a boss fight but it’s still not too challenging.

Odds and Ends, and Bugs 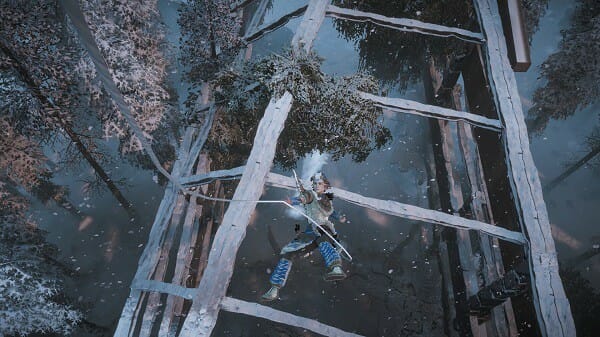 While Horizon was mostly a stable game, I did run into a few issues here and there.  Mainly it involved Aloy getting stuck in the environment. Once, after I dived off of a cliff, I got stuck in a rock.  Another time was at the end of the damn game, and I mean that literally.  I was fighting the last boss and I got stuck on a wall. Forcing a death and restart of the encounter.  Thankfully, Horizon does checkpoints fairly regularly, so I didn’t lose too much progress, but it was still annoying.

The story structure of the game is strange, to say the least.  After the first three or four hours in the starting area, you are told to go out and explore the world at your leisure. With the end goal being getting to the big city.  The big city mission is only considered level 12. However, between you and it, are robots that are far more dangerous than you would expect.

Most of the time, it’s easier just to run away from encounters because you will get destroyed otherwise. Especially, early on, if you try and face most robots.  It’s an odd thing for the game to say “Go to this area to advance the story, but it will be an incredibly frustrating and harrowing thing for you to accomplish.”  Also, it takes you way too long to find fox skins for upgrades, which can be very aggravating.

A lot of interesting characters inhabit the world

Little glitches can inhibit your progress

The story missions are at odds with the game difficulty

Overall Score:  9.0 out of 10 While it may have the occasional small issue, Horizon Zero Dawn is an amazing accomplishment. One that is not only inventive and creative but feels like the start of a whole new franchise for Guerrilla Games and Sony. Horizon has a fresh new character, some superb gameplay, and great foes for you to tackle as you roam around an unfamiliar landscape.  Horizon is a truly fantastic game through and through and should be played by everyone who owns a PS4.