Before the existence of Resident Evil VII: Biohazard, Capcom found itself at a crossroads with the series. Preferring to forgo its Survival Horror roots, in favor of its recent action oriented success. However, instead of trying to find a nice balance, they went too far in the other direction. Leading Resident Evil down a path of diminishing returns with each subsequent title. Capcom took the grim outlook and returned to the basics with Resident Evil VII. Back are the scary moments and haunting tones of the early series games. Although a bit heavy on the gore, RE7 creates an overall more satisfying experience. Especially, for horror fans waiting for those frightening moments. 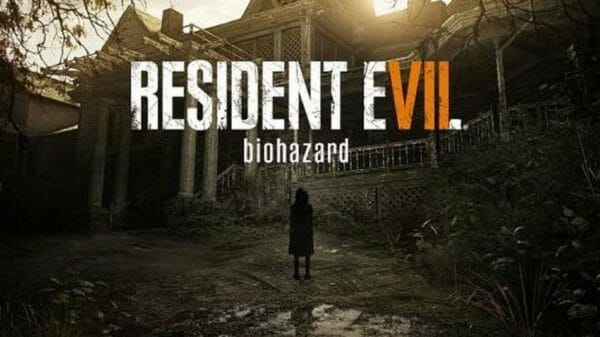 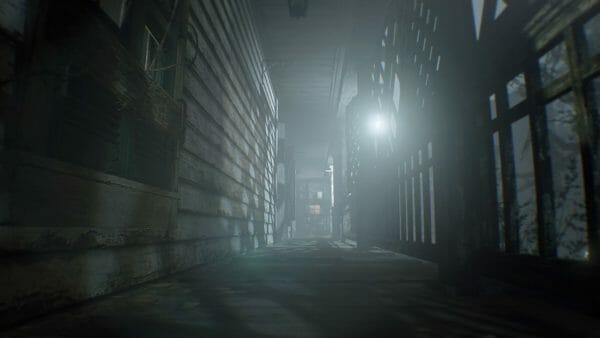 The story of Resident Evil VII is simple. Although, maybe a bit far-fetched. It’s a tale of a husband looking for his missing wife.  Ethan Winters gets a message from his wife Mia Winters, who disappeared three years earlier. The message tells Ethan to go find her in Dulvey, Louisiana. Even though it sounds crazy, and he thinks it could be a prank, Ethan heads south. Upon reaching his destination, Ethan finds himself in the middle of a rundown plantation.

The gate is locked and the foliage has run wild. Entering through a side door, he finds out things are not as they seem. Then, he receives a phone call from a strange woman giving him directions on how to escape. Except before that, he is captured by the not so friendly Baker family.  The rest of the game revolves around escaping the Bakers and rescuing Mia. While also trying to find out how to cure what ails his wife. 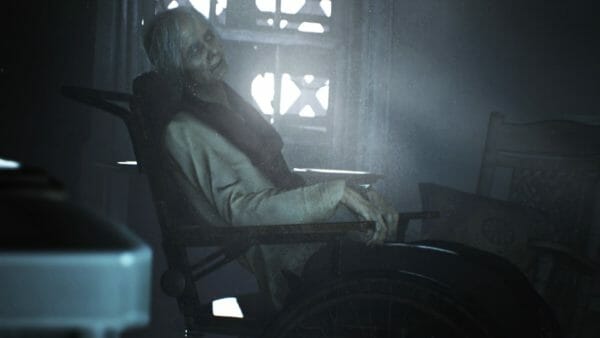 Thinking about it, the Resident Evil series isn’t really known for having a strong story. However, this could be one of the weaker attempts in the franchise. Resident Evil has featured rescue missions gone wrong. Also, people coming into town as an outbreak strikes. Although, basic concepts, they are still some what believable stories. Well, minus all of the zombies and monsters. In general, the plot movement feels forced. People act abnormal just to make sure the plot moves to a certain location.  A house with no cameras, but a girl who is able to call you on the phone at the right time, every time.  Not to mention, a few other plot driven situations later on in the game use this gimmick too.

However, none of that ruins the experience.  The story is never dragging you down. There are no lengthy cutscenes or overly long story segments.  Instead, the backstory and hidden details are all put in documents that you can find along your journey.  If you want to delve into the world created, you can do so at your leisure.  The whole point of Resident Evil 7 is to make you feel alone. Left in a house with a deranged family, with nothing but a knife and a few bullets for protection.

A Class of Enemies 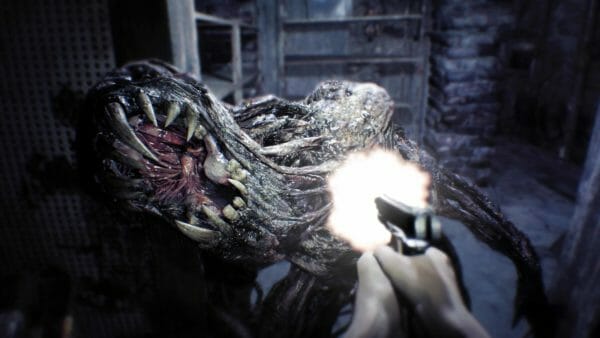 This lonesome feeling even delves into the small quantity of enemies. The common zombie is replaced by black goo type creatures called the Molded.  These creatures usually come out of similarly black molded areas, which cover many sections of the Baker residence.  They love to crawl out when you least expect it and work as a nice upgrade from your standard zombie.  Sure, they look like Finn Balor rejects that forgot the concept of color, but they can pack a wallop.  The molded have a few different quirks, some have what looks like a sharp edged weapon attached to their arm. While others crawl at tremendous speeds. Then, there’s the type that spit a large wad of goo. 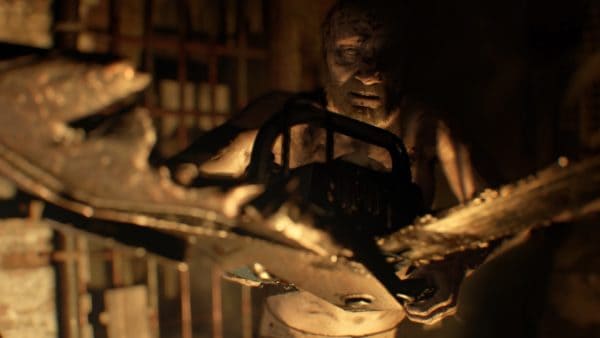 As mentioned previously, the main baddies in RE7 are the Baker family. Each family member also has their own style as well. The father, Jack, chases you throughout the house like a Nemesis rip off.  He taunts you slowly by checking each room. While also being very descriptive in telling you things to frighten you. Facing off with Jack outside of boss fights, results in a bunch of wasted ammunition. Especially, since Jack also loves to destroy the environment. Ultimately, Jack creates a complete uneasiness for the player. 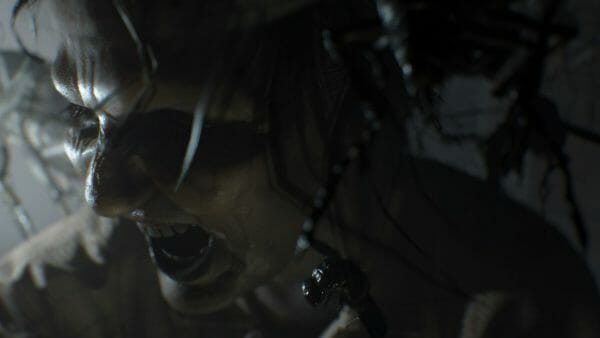 The mother, Marguerite, and the son, Lucas, play smaller roles. Although, both bring unique characteristics to gameplay.  Marguerite loves bugs, showcased by her lantern always surrounded by them. Plus, if she sees you, she sends a swarm your way. When she’s around, swarms of bugs, large flying insects and spiders infest the old house.  All creating annoying interruptions while you try to find the items necessary to progress.  Lucas is very hands off.  He loves to use his brain to outsmart his target.  Filling hallways with traps and creating complicated puzzles to take down his opponent. 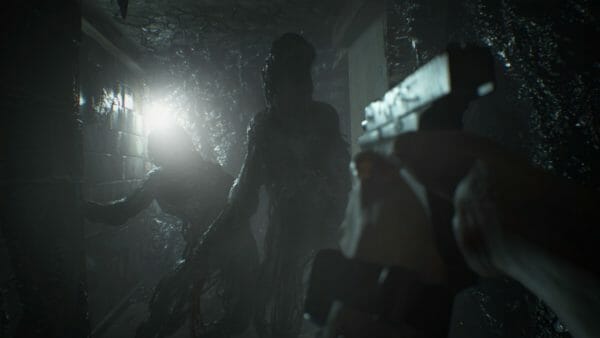 The differences in the Baker family, also represent how sections of Resident Evil VII feel unique. Essentially, Capcom plays the greatest hits when it comes to horror tropes.  In one area, you are sneaking around rooms, while avoiding Jack. Then, you move to a basement full of goo and creepy creatures.  After that, there are paranormal activities and supernatural feelings. Honestly, It keeps the gameplay fresh as you progress through the game. Even including the creepy grandmother too.

All of the different tropes work perfectly in the first person perspective that Resident Evil VII uses. You’d never really know it’s never been used before in the series, because of how well Capcom makes it work.  Taking the ideas of other horror games, RE7 allows the narrow perspective to creep you out with things you can’t see. Even when they are right in front of you.  The first person view also is important when it comes to shooting enemies.  Early Resident Evil games had you hoping your character was pointed in the right direction.  Resident Evil 4 gave you the over the shoulder cam, which helped. However, there is a reason most shooters use the FPS view. Although largely throwback to the RE classics, RE7 still has points where it relies a bit too much on the shooting element from the later games. 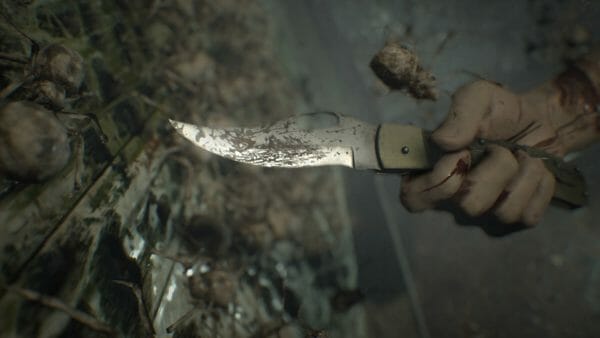 The tight inventory space returns, which makes players decide on what is important to carry on the journey.  There are countless times where you find yourself making a trip back to a safe room to put some items away, because you found a nice healing item that replaces a less effective one.  The addition of resources brings choice back into in the game.  While choosing what to keep in your inventory is important, there’s also choosing how to use those resources in the game as well.

While the game doesn’t dump tons of ammunition on you like the action oriented games in the series.  The game doesn’t go as scarce with resources as the originals do.  There are times where you feel like you need to conserve ammo, but it’s truly rare to be really in trouble. The weapons in RE7 are a classic collection from Resident Evil games past. The typical handgun, shotgun, and a survival knife are all here. 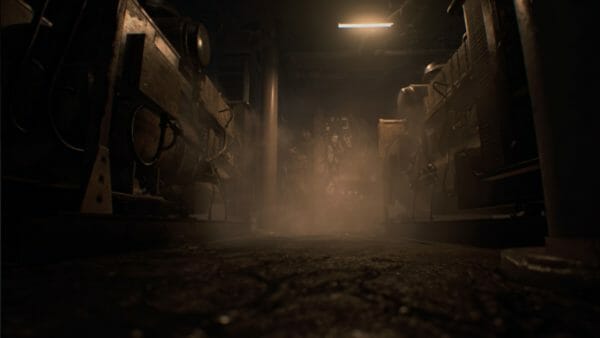 Most of the puzzles, minus the main one with Lucas, are pretty basic and won’t give players too much trouble.  They are a nice change of pace moments from running and shooting. But if you are looking to test your brain, you won’t find it here.

The most interesting addition to Resident Evil 7, are the video tapes you find throughout the journey.  Each one gives a glance at a past event that happened on the plantation. While also throwing down a hint at something needing to be done in the present, which you would have not known otherwise.  I found this a clever way to give hints on what to do. While also showing glimpses of crazy events in the past. 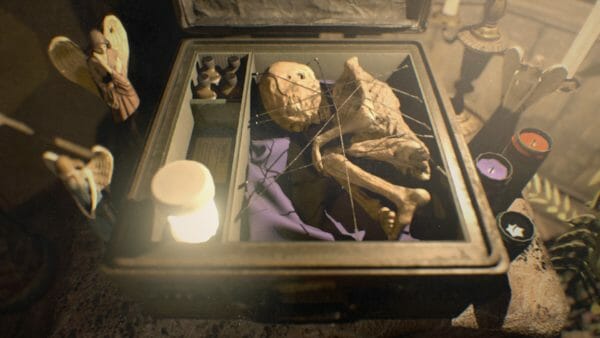 The audio might actually be the star of the game.  The creepy sounds heard constantly, while creeping around the house gives off a very eerie feeling.  It is very easy to find yourself turning around constantly, just to make sure the sound you heard wasn’t something of danger.  It adds to the atmosphere and the lonesome feeling carried through the entire game. On the other hand, the graphics do look a little dated. I wonder if having to make sure it played well in VR, may be a slight reason for it. Regardless of the reason, it’s honestly a minor deal, which doesn’t take away from the experience. For the most part, it looks good, but there are times where it seems like the developers did not have enough time to smooth out some of the edges. 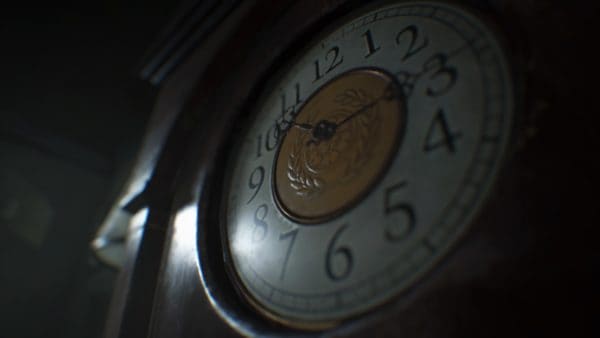 To me, the final third of the game felt completely rushed. Perhaps, even a bit tacked on to make it longer. Maybe Capcom wanted to make sure they stuck to their announce deadline and did not want to delay the game. So, they pieced together a path to the finale. I say this, because towards the end, you are bombarded with documents that quickly reveal secrets, which the entire game was building towards. It’s sad, because the payoff doesn’t feel as satisfying as the rest of the game does. While also leaving too much unanswered.  It very well could also be intentional due to there being DLC. Perhaps even a sequel as well. Honestly, it did not feel like a fully finished product in the end.

The atmosphere is incredibly eerie

Characters and story are not memorable

Felt rushed at the end

Overall Thoughts: 8 out of 10 – Resident Evil VII: Biohazard is a wonderful return to form for the series.  I was a huge fan of the original Resident Evil games, and disliked the transformation into the more action oriented games.  Resident Evil 4 was a wonderful game, but it took the series in the wrong direction. So, Capcom does a great job of evolving the series again, while also staying true to its roots. However, I wouldn’t call it masterpiece either. Not only does the final third of the game feel rushed, but it also felt out of sync with the rest of the game. I’d still recommend this to any Resident Evil or Survival Horror fan out there. In the end, RE7 left me excited for the next title in the series, and especially where they go from here.