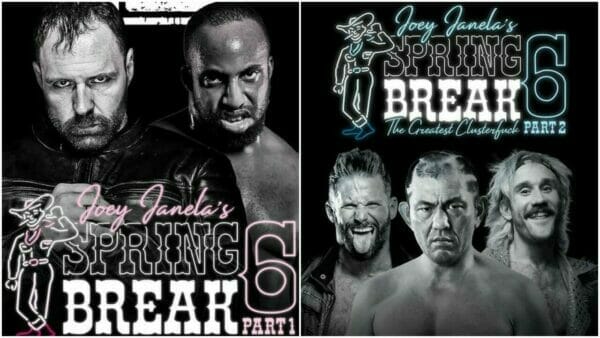 The Indysiders Harry Broadhurst and Mark Radulich are back again and this time they present their Joey Janelas Spring Break 6 Review!

The first event took place in March 2017 in Florida and it found annual success due to its proximity to WWE’s WrestleMania. This event is now part of GCW’s “The Collective”, which is a week long series of wrestling events including GCW’s Bloodsport and Effy’s Big Gay Brunch,[2] as well as events from other promotions including Shimmer and Freelance Wrestling.

The signature match of Joey Janela’s Spring Break is the “Clusterfuck Battle Royal”. This match is similar to a traditional professional wrestling Battle Royal, however it differs in that competitors are eliminated by pinfall, submission, being sent over the top rope, leaving the building, or “death”. Regular competitors in the Clusterfuck Battle Royal are previously retired wrestlers, independent talent, and comedic gimmicks. This Battle Royal, along with the event itself, is known for its abundance of highspots, comedic wrestling, and campiness. Throughout this event it is not uncommon for wrestlers and referees to ignore the traditional professional wrestling rule set (i.e., interference, foreign objects, countouts).

Grammarly Ad: 35:30
Amazon Music Ad: 59:00
For a 30 Day Free Trial of head to Amazon Music Unlimited. Make sure you complete the sign up process. And we also have a special offer for Grammarly.