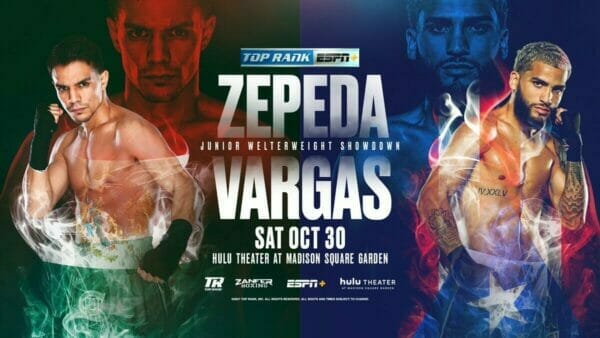 Zepeda (34-2, 21 KOs) is unbeaten in five bouts since a tight majority decision loss to then-WBC world champion Jose Ramirez in February 2019. The slick-boxing Zepeda participated in the 2020 Fight of the Year. He knocked out Ivan Baranchyk in the fifth round of a bout that featured eight total knockdowns. He returned in May on the Josh Taylor-Ramirez undercard and outboxed “Hammerin” Hank Lundy over 10 rounds. Zepeda hopes a win over Vargas leads to a Ramirez rematch or perhaps a crack at undisputed king Taylor. Vargas (19-1, 9 KOs) earned his nickname as a wunderkind in the Bronx, where he compiled a 72-8 amateur record and won six New York City Metro championships. Apart from a controversial disqualification loss early in his pro career, Vargas has been near-perfect. He fought twice in 2020 inside the MGM Grand Bubble, notching wide points wins over Salvador Briceno and Kendo Castaneda. He last fought April 24 in Kissimmee, Florida, and turned back the awkward challenge of Willie Shaw over 10 rounds.