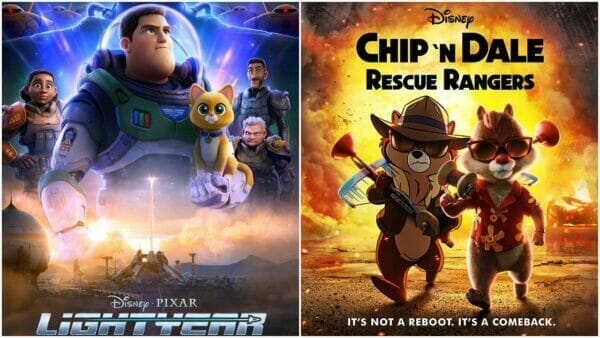 Lightyear (2022) is an American computer-animated science fiction action-adventure film produced by Pixar Animation Studios and distributed by Walt Disney Studios Motion Pictures. The film is a spin-off of the Toy Story film series, serving as an origin story for the character Buzz Lightyear. It was co-written and directed by Angus MacLane and produced by Galyn Susman, and stars Chris Evans as the voice of the title character, with Keke Palmer, Peter Sohn, James Brolin, Taika Waititi, Dale Soules, Uzo Aduba, Mary McDonald-Lewis, Efren Ramirez, and Isiah Whitlock Jr. in supporting roles.

Chip ‘n Dale: Rescue Rangers (film, 2022) is an American live-action/computer-animated action-adventure comedy film based on the characters Chip and Dale and continuation of the animated TV series of the same name. It was directed by Akiva Schaffer and written by Dan Gregor and Doug Mand. The film stars John Mulaney and Andy Samberg as the voices of the titular pair, respectively, with KiKi Layne, Will Arnett, Eric Bana, Flula Borg, Dennis Haysbert, Keegan-Michael Key, Tress MacNeille, Tim Robinson, Seth Rogen, and J.K. Simmons. The film takes place in a world where fictional characters in cartoons, movies and other media live alongside humans, and centers on Chip and Dale, thirty years since the cancellation of their show due to a falling out, coming back to reconcile their differences while they investigate the kidnapping of their friend and co-star Monterey Jack.

Check out more of our Disney reviews.