Four years ago, Tarsier Studios released a little game full of atmosphere and nightmarish creatures.  People applauded it for creating an interesting world and backstory without a character saying a single word. The game featured a little girl named Six who was trying to escape giant human-like creatures. Now in 2021, Tarsier Studios returns to that formula but this time you play as a little boy named Mono who is attempting to survive different human-like creatures in Pale City.  Going back to the world of Little Nightmares gave a sense of familiarity, but that is not always a good thing for Little Nightmares 2. 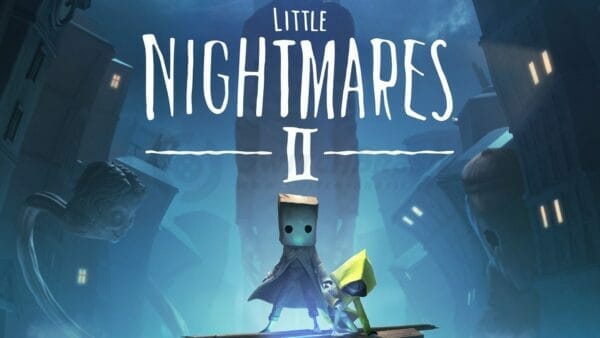 There were many times in Little Nightmares 2 where I felt like I was just playing more of the original. There were also several moments where I wonder if this was a longer DLC section of the original game, which already had four different DLC sections added to it. The gameplay is extremely similar to the original, which does allow the ability to jump right into the horrific puzzles and jump scares with very little learning required. Mono even runs into Six, pre-raincoat, and teams up with the original’s protagonist to work through several puzzles. The giant creatures also return, and while each one has a unique feel to them, the intrigue has worn off for me after playing the first game.  It was tough to feel creeped out by the same kinds of creatures I’ve seen before.

Getting into the Swing of Things

There is little when it comes to new additions to the gameplay, but the biggest change is the ability for Mono to pick up small items and use them as weapons. There are several moments during the adventure that Mono finds himself surrounded by different little creatures. Instead of just having to run and hide, the ability to swing a hammer or a board is a nice change of pace. Unfortunately, the timing of that swing is awfully slow. Furthermore, each type of enemy has a little pause in its run. Creating some incredibly difficult attacking movements as a result. I died several times trying to fight with the timing of the swing.  However, even with the touchy timing, the fighting was a good break from the hiding and puzzle-solving.

When it comes to the puzzles in the game, there are some very clever mechanics that Little Nightmares 2 plays with. Taking classic mechanics and adding little twists to them to keep them interesting and fresh.  There is a longer puzzle near the end of the game that had several elements to it, each one adding onto something learned earlier. It is those kinds of things that make me a big fan of puzzle games. On a sour note, the addition of the returning Six takes the puzzle formula and drags it out to a slog. During the gameplay moments that you are teaming up with the main character from the original, puzzles are dumbed down and the test is on your patience. There were too many times I found myself standing at a puzzle moment waiting for Six to walk slowly over to the area to help me push a large object. Unfortunately, this is what happens for a majority of the puzzles when you are with your little companion.  Mono cannot reach a certain object or exit so he needs Six to help him push something, rinse, and repeat.

The inhabitants of Pale City all seem to have one thing in common, a love for television. Little Nightmares 2 does not hide the fact that the message of the game seems to be that watching too much television turns you into a mindless goon. There are several scenes in the game where Mono can sneak around enemies because they are glued to a television showing static. There are even enemies in the game that you must move from one television to another to get through. Television is such a component of the game that they even help teleport Mono from place to place in other puzzles.  I do find it interesting when a piece of media focuses on how television is so bad for you, but you are staring at the television to consume their product as well.

Overall, Little Nightmares 2 is more of the same. Those that loved the original will find a lot to love in this game too. I have already seen dozens of videos explaining the hidden lore and allusions to the first game. It is these kinds of things that create a very loyal and loving fanbase. Tarsier Studios has done a fantastic job creating intrigue for those fans. However, for players like myself, who love this sort of genre and enjoyed the first game, there is a sense of something missing with this new title. I was expecting things to take a step forward, especially going to a new console generation, but instead, there was a lot more of the same feeling than I would have liked.

If you loved the original, you would find plenty to love here. If you missed out on the first title, you do not have to play it to understand the sequel and its world.  For me, the game was a good continuation but did not bring anything that makes it stand out. Thankfully, it is only a few hours long and I recommend fans of the genre give it a chance.